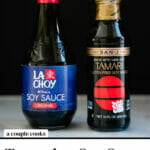 The difference between tamari vs soy sauce? Here’s the breakdown on these similar ingredients and when to use them in your cooking.

Tamari vs soy sauce: what’s the difference? There are a few major differences between the two: though they are both used to add salty, savory umami to dishes. Here’s what to know about when to use them and whether to choose one over the other!

Tamari vs soy sauce: the differences

What’s the difference between these salty sauces? Here’s a breakdown:

You can substitute one for the other

Soy sauce and tamari work as substitutes for each other! Here’s what to know about using them in recipes:

Tamari vs soy sauce: which is healthier?

Because tamari is gluten-free, does that make it healthier than soy sauce? Not necessarily. Here’s the main breakdown:

Bottom line: You can enjoy both tamari and soy sauce moderation as part of a healthy diet.

Recipes with tamari and soy sauce

There are lots of healthy recipes that use tamari or soy sauce as a seasoning! Here are a few to get you started: