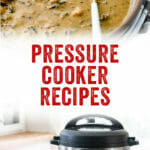 These easy pressure cooker recipes are the best ways to use your Instant Pot to make dinner, from soups to pasta to tacos!

Want to make dinner in your pressure cooker but not sure where to start? Hi, we’re Alex and Sonja, and we’re here to help! In the past few years, we’ve gone from skeptics to electric pressure cooker experts. We’ve understood what makes it tick, what are the advantages to using one, and where it can come up short. We’ve found vegetables it can cook in an instant (black beans! beets! spaghetti squash!), and other recipes that take just as long as the stovetop. In short: we’ve made all the mistakes and mastered all the techniques so that you don’t have to.

Here, we’ve compiled our top electric pressure cooker recipes for dinner! These are the recipes we often turn to when we want to make a full meal with our Instant Pot. If you’re looking for other recipes like side dishes or basics (rice, beans, grains, veggies), head to some of the posts below. 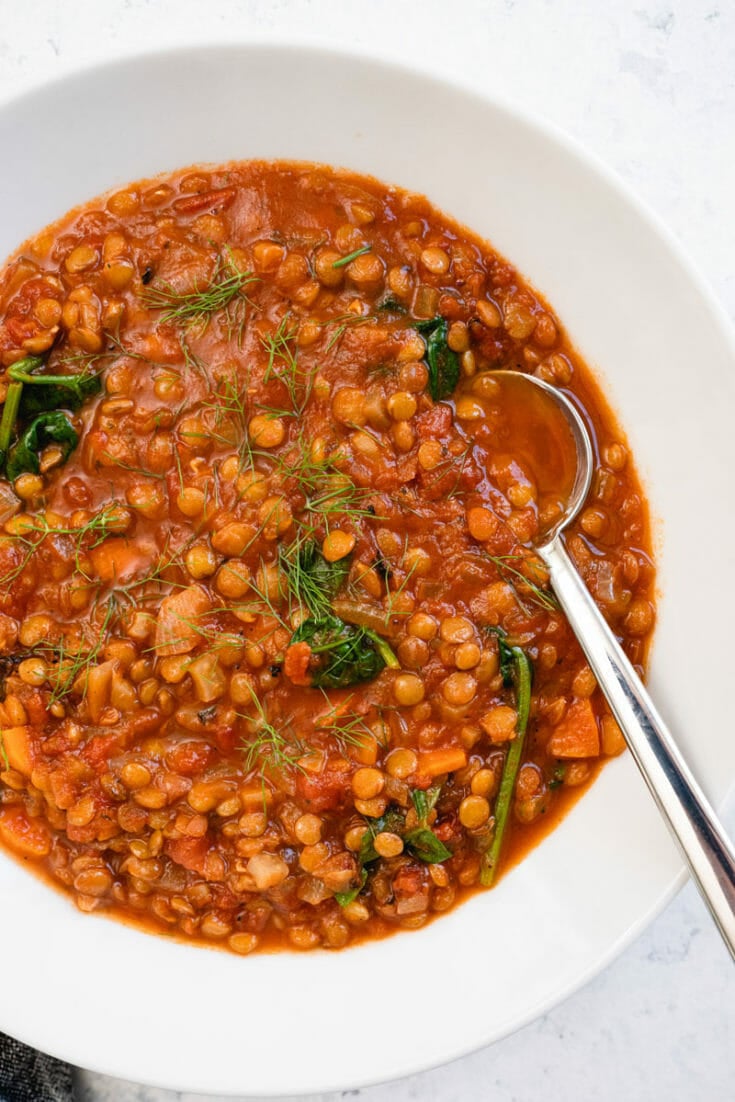 Here's the very best pressure cooker lentil soup! It's the perfect intro to cooking soup in the Instant Pot, easy to make and full of nutritious ingredients. Lentils load it with plant based protein, and it’s bright red from fire roasted tomatoes. The star ingredient: fresh fennel, which adds a smoky undertone. Enjoy a steaming bowl with a side of our best cornbread.

Don’t take it just from us: reader Laura told us,“My husband said this could easily go into regular rotation at our house.” Score! 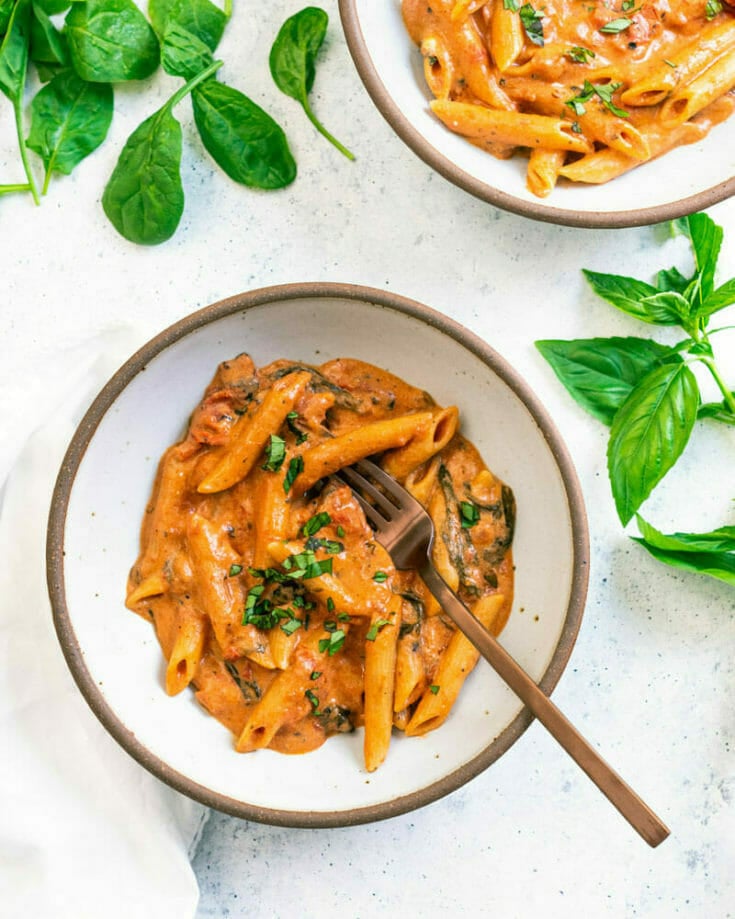 Can you cook pasta in a pressure cooker? Yes, and it's darn good, too! This pressure cooker pasta recipe cooks the pasta in a sauce of fire-roasted tomatoes, fresh basil and spices. You'll find the pasta slightly more tender than it would on the stovetop, but it's still mega delicious: kind of like a baked pasta. To make it creamy, stir in goat cheese: it adds a brightness and tang. 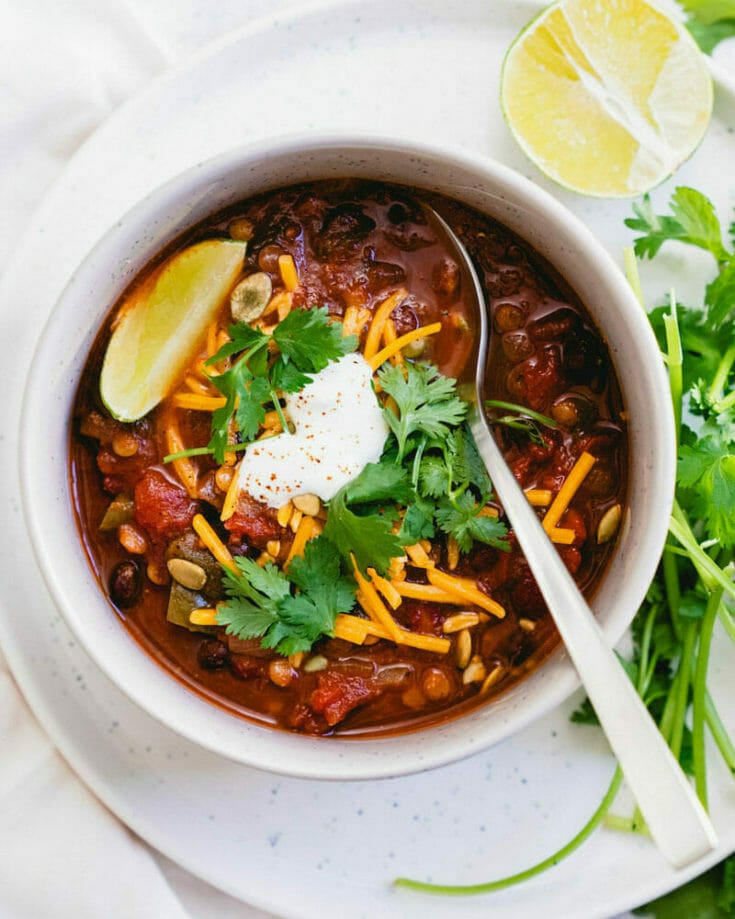 This pressure cooker chili recipe is pretty darn delicious, if we may say so ourselves! To keep it on the healthy side, it's a vegetarian chili, made with two beans and a surprise ingredient: lentils! The different textures work wonderfully in the chili-powder spiced broth. The best part are the garnishes: top with cheese and sour cream (or cashew cream for vegan), cilantro and a squeeze of lime. 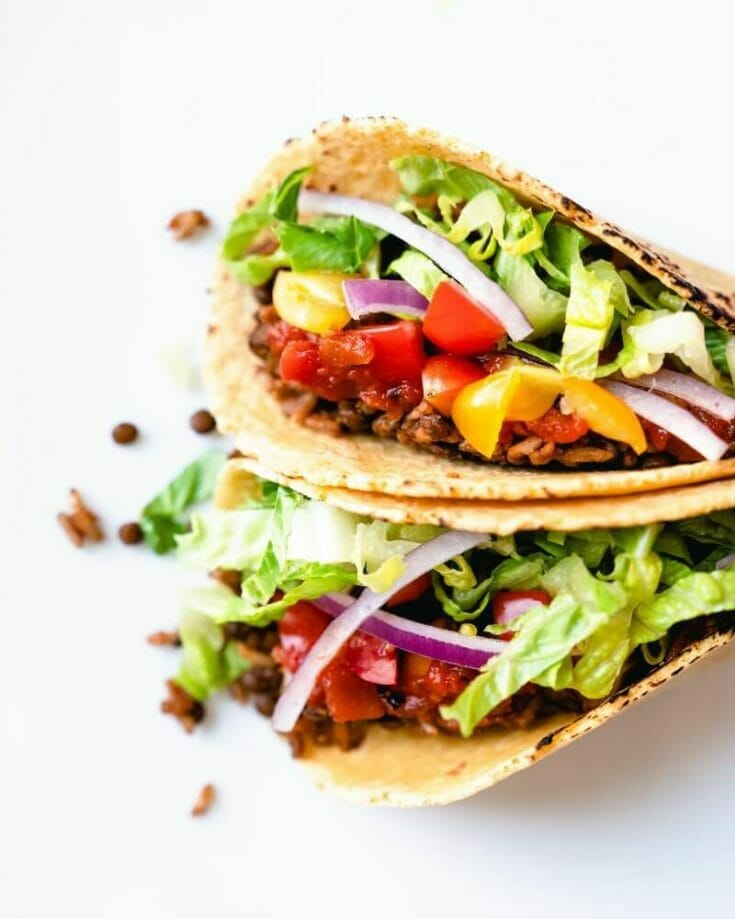 Tacos in a pressure cooker? You bet. These also have a healthy spin, made with a taco-spiced lentil filling that gets rave reviews from readers. Top them with a rainbow of crunchy veggies and salsa, and this recipe has got you ready for taco night in a flash. 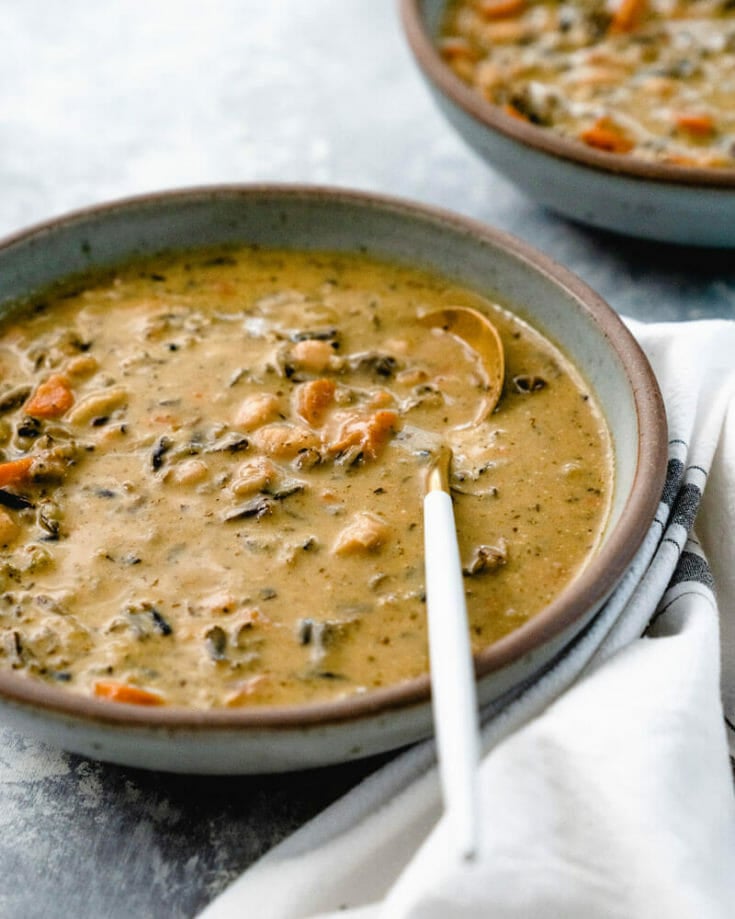 Here's a pressure cooker recipe that everyone loves: and we mean everyone! Intensely cozy and comforting, it features chewy wild rice, savory veggies and white beans, swimming in a naturally creamy sauce that you'll never believe has no dairy. It's pretty magical. Serve with biscuits or homemade cornbread.

Don't take it just from us! One reader commented: "This soup is AMAZING!!! I actually think it’s my new favorite soup, which is saying a lot!" 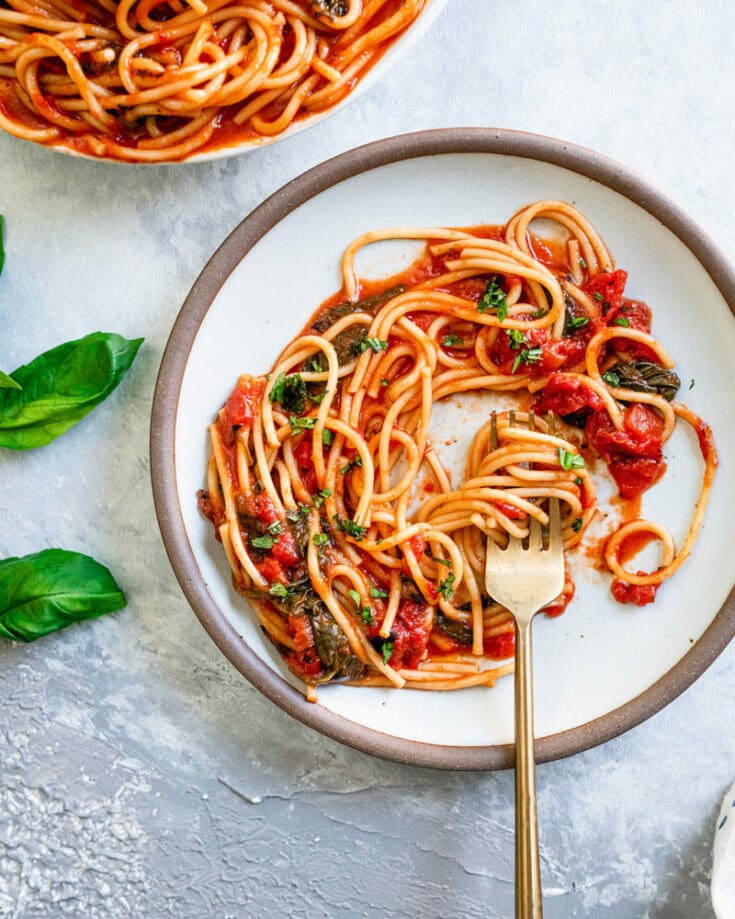 Spaghetti in a pressure cooker? Yes, it's even possible to boil up a pot of noodles right in the Instant Pot. This one is one of the easiest pressure cooker recipes: simply throw in the noodles and sauce ingredients and press Go. And it comes out tasting incredible: it's made with fire-roasted tomatoes, fresh basil, and lots of seasoning.

Take it from one of our readers, who said: "“Oh my, I scraped the bowl clean on this one! The flavor was awesome." 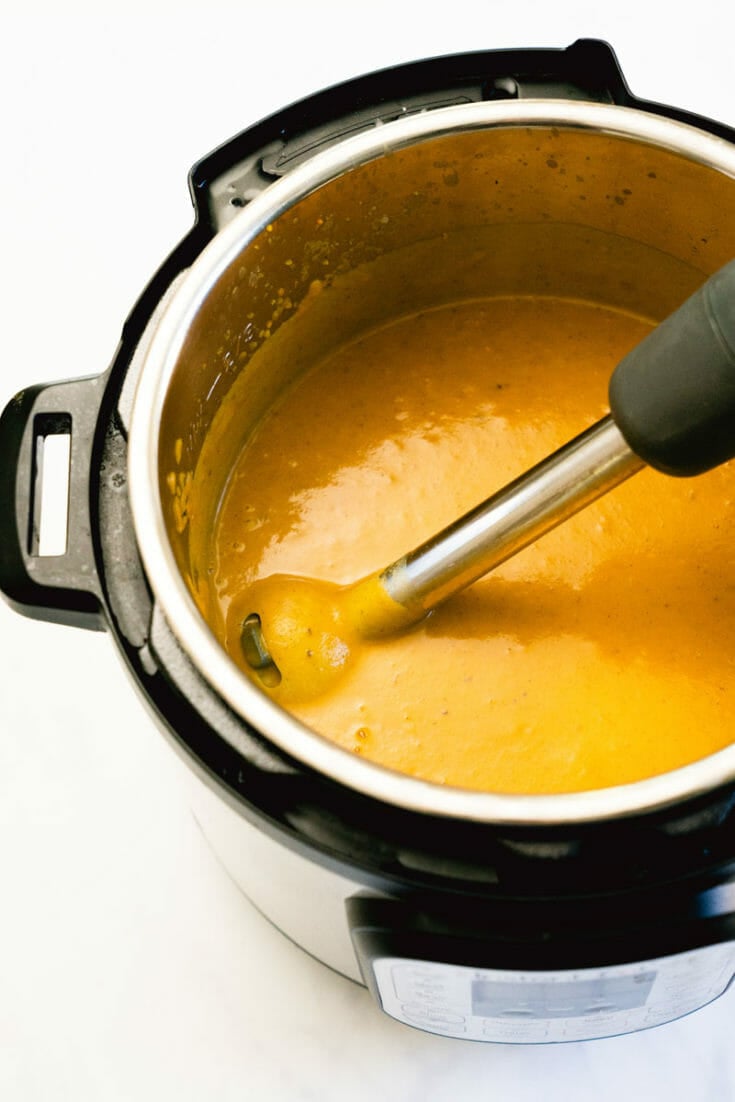 Here's everyone's favorite fall soup, done up as a pressure cooker recipe! While butternut squash soup might seem simple, it always takes longer than planned (especially chopping the butternut squash). It's one step easier in the pressure cooker, where you can set it and forget it! Serve with grilled cheese to make a complete filling meal. 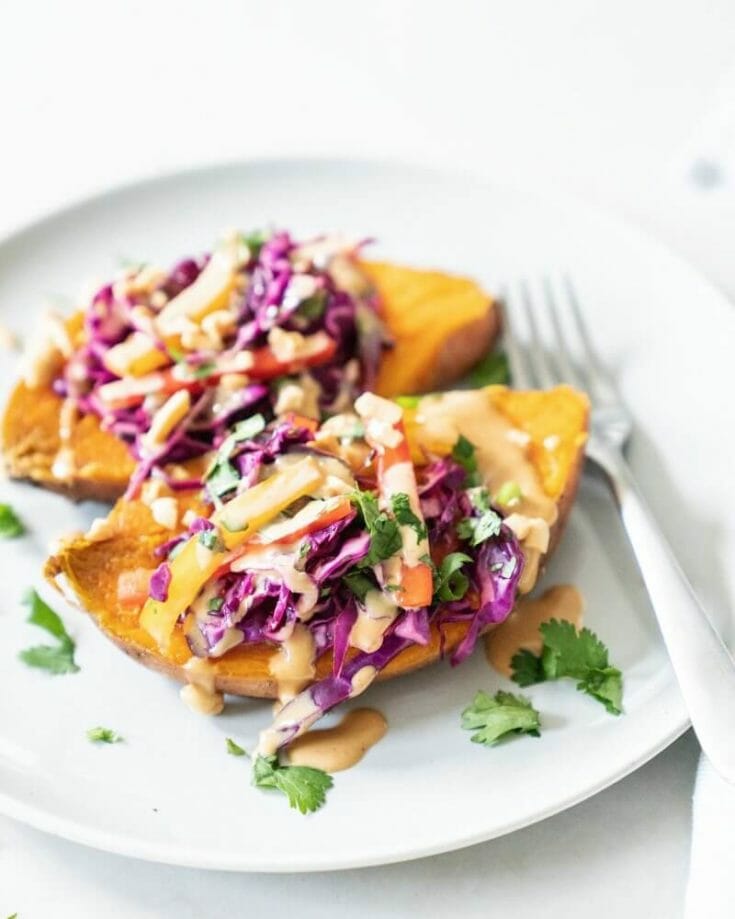 Why bake a sweet potato when you can throw it in the pressure cooker? Pressure cooker sweet potatoes come out perfectly moist and tender, ready for loading up with goodness! Top them with our Thai peanut butter sauce, a tangy cabbage and bell pepper slaw, and crunchy peanuts. 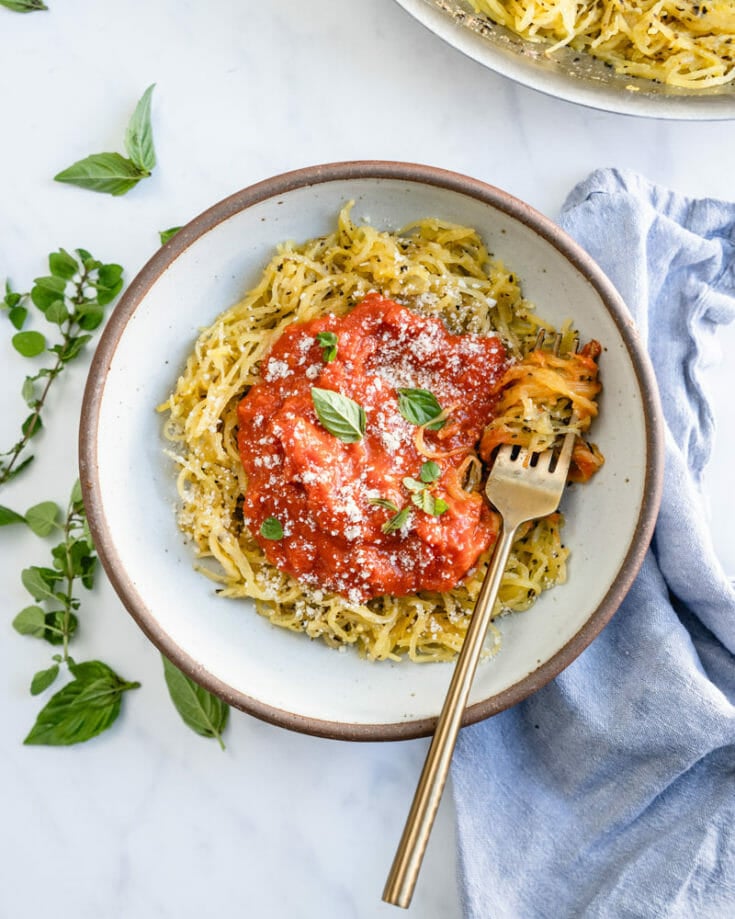 So we talked pressure cooker spaghetti: how about spaghetti squash spaghetti? This tasty dinner recipe combines tangy marinara sauce (use storebought or homemade) with spaghetti squash instead of traditional pasta. It makes for a tasty spin on the classic! For a filling main dish, add goat cheese, seasoned lentils, meatballs, or veggie meatballs. 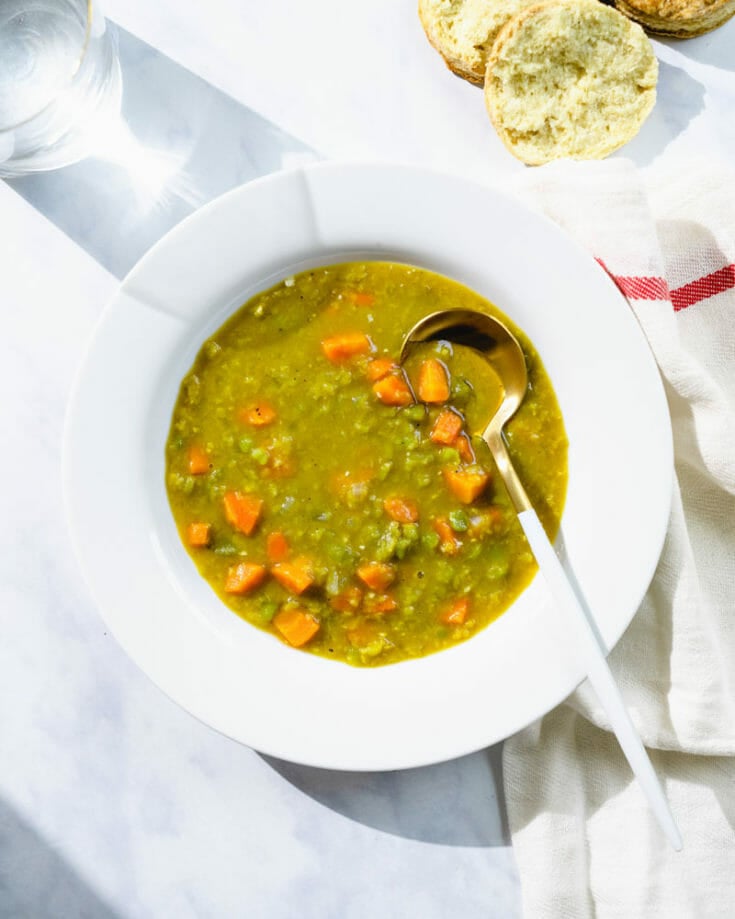 Last up in our pressure cooker recipes: split pea soup! It's cozy, comforting, and full of filling split peas! The best part: it's seriously simple to put together. All you'll have to do is chop onion, carrot and celery: that's it! Then put your pressure cooker to work for the rest. It comes out lightly smoky and satisfying.

An electric pressure cooker is a device used to cook foods at high pressure, which cuts down on cooking time. It’s the exact opposite of a crock pot or slow cooker, which has very long cook times. Other terms for a pressure cooker are Instant Pot or Instapot, a slang variation).

What pressure cooker do you recommend?

Why cook with a pressure cooker?

As Alex and I have come to understand our pressure cooker, we’ve learned a few things. The cook time for pressure cooker recipes can look deceptively short. Apple crisp cooks in 2 minutes, and broccoli in 0 minutes! But keep the following timing in mind when making these recipes: