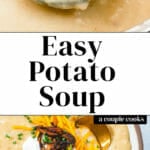 Here is the very best easy potato soup you’ll find! Creamy and comforting, it’s made in minutes with no cream and no need for a blender.

Ready for the very best silky, easy potato soup? Somehow, Alex and I didn’t have a go to recipe: until now. Yes, this recipe will blow your mind! It’s got the best creamy yet chunky texture, plus a twinge of intrigue from the spices. While most potato soup recipes are loaded with cream and butter, this one recipe has no cream and just a touch of butter. The best part: there’s no blender needed! With no special equipment and a handful of common ingredients, you’ve got a damn good potato soup (if we do say so ourselves).

Got a pressure cooker? Go to Instant Pot Potato Soup.

What’s in this easy potato soup?

I can rave on and on about this easy potato soup because Alex made this recipe! Somehow, he stumbled upon the perfect combination with this one: a healthy spin, big flavor, and it’s easy to make. Those are the type of recipes we’re obsessed with: we even wrote a book about it! Here are the potato soup ingredients that make this soup shine:

Really, there’s no cream in this easy potato soup! The combination of 2% milk, vegetable broth, butter, and the potatoes mashed in the pot make up the rich and creamy texture. There’s a little over ½ tablespoon butter serving, so it’s a very moderate amount for the amount of richness and creaminess here!

Why no cream? Well, Alex and I do use cream in some of our recipes. But healthy soup recipes are our jam, so using milk cuts down on the calories and richness. Plus, we often have milk on hand! Heavy cream is a special ingredient we don’t often buy.

There’s no blender needed: use a potato masher!

Many potato soups call for transferring the hot soup to a blender. But no blender is needed here! You’ll cook the potatoes until they’re falling apart, then mash them right in the pot using a potato masher. This cuts down on mess, and makes for a great creamy but chunky texture (my favorite part about this easy potato soup).

Another note: many potato soup recipes call for making mashed potatoes in advance, then stirring those into the soup. Why do that when you can mash the potatoes right in the soup pot? It’s beyond us. Maybe those recipe authors are less worried about making a potato soup that’s truly easy. Lucky for you, it’s our obsession over here! (Wink.)

The second best thing about potato soup, other than being deliciously creamy, is the toppings! Here we’ve listed our very favorite ways to load up this soup:

They’re pretty classic (except for the bacon idea!), so we’re certain we haven’t thought of everything. Serve with garlic bread for a total comfort food meal. Let us know your favorite potato soup toppings in the comments!

This easy potato soup recipe is…

Vegetarian. For gluten-free, use 1 for 1 gluten-free flour. For vegan, plant-based, and dairy-free, go to Creamy Vegan Potato Soup.

Here is the very best easy potato soup you’ll find! Creamy and comforting, it’s made in minutes with no cream and no need for a blender. (Vegan variation: Go to Creamy Vegan Potato Soup.)

Here are a few more soup recipes that you might also enjoy: