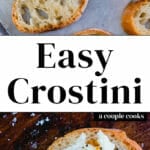 Crostini are the perfect party appetizer: load these little toasts with toppings of all kinds! Here’s how to make them at home: it’s quick and easy.

Here’s a fantastic easy appetizer: crostini! Crostini means “little toasts” in Italian, and these toasts are perfect for parties! Load these crispy breads with toppings, or serve with dips, spreads or cheese. Alex and I make crostini often for parties, and we’ve been using this simple method for years. It’s time to share it! There are so many things you can do with a good crostini: this one takes only 10 minutes to bake and uses no oil. Here’s how to do it!

How to make crostini

Here’s the simple method we use to make crostini. You don’t even need to use oil! Bake them up in a hot oven and they’ll turn to crisp crackers in just 10 minutes. Once you’ve make this recipe once, commit it to memory! It’s one of those things that we now do without thinking about it.

What kind of bread for crostini?

You can use any type of small bread, because you’ll want to get relatively small rounds for topping. The most standard way to make it is a French style baguette, which is what we recommend. You also can use ciabatta bread, or any small artisan style rolls. Try to use an artisan-style bread that has a crispy crust: stay away from soft or enriched breads: they won’t get as crispy.

Arguably the most popular way to serve crostini: with toppings as finger food! There are literally endless combinations you could use to top your crostini. Here are our top 10 ideas:

Crostini are not just for topping: they’re for dipping too! These crusty breads are essentially fancy crackers. Serve them with your favorite dip for entertaining, or as a lunch idea. Here are a few ideas to get you started:

Variation: turn them into garlic toast!

Here’s a way to amp your crostini: make them into garlic toast! This garlic toast recipe uses a toasted baguette like this crostini, but adds olive oil, minced garlic, and dried garlic before toasting. It adds the best garlicky flavor! To get perfectly crisp toasts that are closer to crostini, use a little less oil than the recipe calls for.

If you make these crostini as garlic toasts, they’re great as a side for soup like Tomato Soup, or even with pasta like Fettuccine Alfredo.

Can you make crostini ahead?

You can! You can make crostini up to 5 days in advance. Allow them to cool fully, then store them in a sealed container at room temperature until serving them as an easy appetizer!

This crostini recipe is…

Crostini are the perfect party appetizer: load these little toasts with toppings of all kinds! Here’s how to make them at home: it’s quick and easy.

Keywords: Crostini, How to make crostini

Crostini are what we serve most often when we’re entertaining. Throwing a party? Here are a few more appetizer recipes and finger food ideas we love: