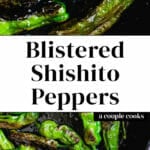 Shishito peppers are best when they’re blistered! Cook these mild peppers in a hot skillet, then sprinkle with salt. Bet you can’t eat just one!

Got a load of shishito peppers? Here’s the best way to cook them: blistered! These little peppers have quite a cult following. Because here’s the thing: they’re just as irresistible as French fries. Cook them at high heat until they’re tender and their skin is blackened, then sprinkle with salt. Each bite is a mini-explosion of sweet, salty and charred flavor! Alex and I grew these peppers in our garden this year, and my did they make the perfect snack: we scarfed them down in minutes. Here’s exactly how to cook them!

You can also roast these peppers! Go to Roasted Shishito Peppers.

What are shishito peppers, exactly?

Shishito peppers are a thin, bright green peppers with wrinkly skin. They originate from Asia and are used in Asian cuisine; shishito means “lion head pepper” in Japanese. More recently, this pepper has become a popular as an appetizer here in the US and around the world. Why? Because they’re just that good. You’ve got to taste them to become a believer!

Where to find these babies? You can find them at grocery stores and farmers markets in the summer months. They’re easy to grow at home, too; the ones in the photo are from our garden. You can also cook Padron peppers in the same way if you’re able to find that variety. They are a Spanish variety that looks similar to the shishito and are often served as tapas.

Here’s the thing: most shishito peppers are quite mild, but approximately 1 in 10 is spicy! We haven’t found this to be true with our garden variety shishito peppers, but we have had this happen at restaurants. So it can depend on the source!

Shishito peppers are very easy to cook: you can cook them on the stovetop or roasted. Here we’ll cover the stovetop method. If you’re looking for roasted, head to Roasted Shishito Peppers. There are just a few tips to know before you go to the recipe below:

How to season shishito peppers

The best way to season shishito peppers? Simply with salt! Our favorite way to eat them is with just kosher salt or flaky sea salt. You’ll be surprised at the savory sweet flavor that comes through with this basic preparation. To get a little more intriguing, you can add Asian-style or fusion flavors:

A few dipping sauces for serving

You can also vary this shishito peppers appetizer by serving with a dipping sauce! Again, Asian-style flavors go well, but out of the box flavors and fusion mixes go well too. Some restaurants serve shishito peppers with Mediterranean-style aiolis (typically used with French fries). So really anything goes! Here are some ideas:

This shishito pepper recipe is…

Shishito peppers are best when they’re blistered! Cook these mild peppers in a hot skillet, then sprinkle with salt. Bet you can’t eat just one!

Love entertaining? Here are a few more appetizer recipes and vegan appetizers to serve before the main event: