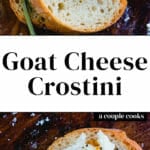 It’s often that Alex and I are stumped when we first think of finger foods to serve for a party. So over the years, we’ve developed a crutch: goat cheese crostini. This appetizer idea could not be easier: honestly, it’s more an idea than a recipe. Bake up some homemade crostini, top with goat cheese and honey, and you’ve got the most delicious sweet and savory taste treat. The flavor of soft goat cheese is so perfect in itself that you don’t need any other seasoning. Once you make this once, it will become part of your repertoire for years! Here’s what to do.

Start with a baguette

Any baguette or small round crusty bread will do for this goat cheese crostini! You will want it to be an artisan-style loaf, because that’s what gets crispiest in the oven. An enriched bread or roll will be too soft. Likely you can find a French-style baguette at your local grocery.

Or if you have time and love to bake, you can make one at home! (Here’s our Homemade Baguette Recipe.) Of course because this is a seriously easy recipe, we assume you’ll probably pick one up at the store.

Crostini are so easy to make: they’re simply toasted baguette slices that bake for 10 minutes until they’re as crispy as a cracker! You don’t even need any oil to make them. Here’s what to do:

The last thing you have to do for goat cheese crostini: top it up! To keep this recipe truly an easy appetizer, here’s what we added. The savory, creamy goat cheese against the sweet of the honey is truly magic! The flavors shine in their simplicity:

Of course, you don’t have to stop there. This one is the basic recipe, so it’s designed as the base that you can add to from there. This is perfect for using up whatever vegetables you happen to have on hand. In the summer, you can use almost any veggie or fruit that’s seasonal! Make up your goat cheese crostini using the recipe below, then swap out the honey for some of these variations:

If you happen to be cooking for someone who can’t eat goat cheese, try one of these Substitutes for Goat Cheese.

Can you make crostini ahead?

You can! You can make crostini up to 5 days in advance. Allow them to cool fully, then store them in a sealed container at room temperature until serving.

There’s nothing better than a fresh log of soft goat cheese, in our opinion! Did you know there a few benefits of goat cheese over a standard cow’s cheese like cheddar or mozzarella? Here’s what gives goat cheese a leg up (Source: Prevention):

This goat cheese crostini recipe is…

If you’re like us, you could enjoy creamy cherve any day of the day! Here are some goat cheese recipes so you can try just that: