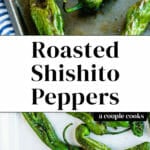 It’s so easy to make roasted shishito peppers! Broil them a few minutes until blackened and tender: they’re seriously irresistible.

Looking for an appetizer or snack that’s utterly irresistible? Try Roasted Shishito Peppers! This long, thin pepper has become popular in restaurants because it makes the perfect salty bites with a burst of flavor. And guess what? It’s easy to make them at home! It might look like you need fancy equipment, but all you need is your oven broiler. They come together quickly into a beautifully healthy snack or way to start a meal. Here’s all you need to know!

What are shishito peppers?

Shishito peppers are a thin, bright green Asian variety of peppers with wrinkly skin. Shishito means “lion head pepper” in Japanese. The variety is used in Asian cuisine and more recently has become popular the US and around the world.

Most shishito peppers are quite mild, but approximately 1 in 10 is spicy! So it’s a little like Russian roulette when you’re eating them. Here’s the thing: our garden shishito peppers were 100% mild (the ones pictured here). But we have had spicy ones at restaurants, so it really depends on the source for the peppers.

How to make roasted shishito peppers

The most popular way to cook shishito peppers is to make Blistered Shishito Peppers in a skillet on the stovetop. We love this method, but we recently found that broiling is even easier! All you have to do is throw them in the broiler for a few minutes per side: no hot oil needed! Here’s what to know about how to make roasted shishito peppers:

You can find two types of sesame oil at the store: toasted and regular. For these roasted shishito peppers, make sure to get toasted sesame oil for this recipe! Here’s the difference:

You can serve these roasted shishito peppers plain, and they make an impressive appetizer for serving to guests! There’s nothing prettier than the lovely shapes of the charred peppers on a plate. If you’d like to step it up, add a dipping sauce to go with it! Asian flavors jive well, but you can also go out of the box with fusion-style flavors. Some restaurants serve shishito peppers with Mediterranean-style aiolis (typically used with French fries). So there are lots of options! Here are some ideas:

This roasted shishito peppers recipe is…

It’s so easy to make roasted shishito peppers! Broil them a few minutes until blackened and tender: they’re seriously irresistible.

There are so many types of peppers used in different cuisines! Here are some of our favorite pepper recipes: