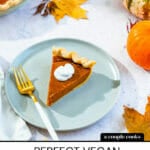 Here’s your perfect vegan pumpkin pie recipe! This plant based spin is (dare we say it) even more delicious than the original.

What makes this pie incredible? Let us count the ways. Pumpkin pie has always been a favorite of mine: and of course, my grandma’s pie is the absolute best. So when we whipped up this Vegan Pumpkin Pie recipe, Alex and I weren’t expecting to love it more than the original. But this vegan pie is so full of pumpkin-spiced sweetness and the flavors are so delightfully elevated, no one will guess it’s plant-based! We’re solidly in camp vegan pumpkin pie, so much so that we’ll be making this recipe for years to come. Here are all our secrets!

What makes this the best vegan pumpkin pie?

Oddly enough, coconut milk does wonders in a vegan pumpkin pie. Something about the light fruitiness of the milk goes hand in hand with bright orange pumpkin! There’s no need for evaporated milk, which is what’s used in a standard pumpkin pie. We’re happy to kick it to the curb for a more whole food plant based option! Here’s what you need for the filling of a killer vegan pumpkin pie:

All you have to do is mix all of the ingredients above in a blender, then pour it into the crust and bake. The filling comes out creamy and beautifully flavorful: like a larger than life version of your grandma’s pie! Does it taste like coconut? Not really! It’s difficult to even detect a coconut flavor: you mainly just taste silky, pumpkin-spiced goodness.

The part of a vegan pumpkin pie with the most technique is the pie crust! We have a whole separate article about Vegan Pie Crust with all of our tips and tricks. But here’s a brief overview of the process you’ll follow:

How to make a pie crust shield

The easiest way to season the filling for this vegan pumpkin pie is using store-bought pumpkin pie spices! But did you know you can also make them at home? If you don’t have pumpkin pie spice but have a stocked spice collection, it’s easy to make. Here are the spices you’ll need:

Add these together and it makes ¼ cup pumpkin pie spice! Store it in a sealed jar and it lasts for up to 1 year, though of course it’s best at its freshest.

What’s the best topping for vegan pumpkin pie? Most people are used to a dollop of whipped cream: which certainly makes the entire experience complete. This pie is actually very delicious without whipped cream. But if you’d like the full experience, here’s what to do:

This vegan pumpkin pie is the crown jewel in our list of vegan Thanksgiving recipes! Here are some more favorites for the holiday:

This vegan pumpkin pie recipe is…

Here’s your perfect vegan pumpkin pie recipe! This plant based spin on the standard is (dare we say it) even more delicious than the original.