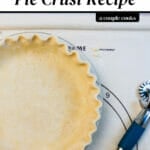 Here’s how to make vegan pie crust! This flaky pastry can be made using coconut oil or vegan butter, and no one would guess it’s plant-based.

Want to make your favorite pie…but plant based? Here’s the baking trick you need: this Flaky Vegan Pie Crust! This pastry crust is flaky, tender and perfectly seasoned: no one would guess there’s no butter. You can make it with coconut oil or vegan butter, and we’ve tested it on friends and family: no one will know the difference! We love using this crust for our apple pie or pumpkin pie: but you can use it as a plant-based stand-in for any of your favorite pie recipes. Let’s get baking!

This vegan pie crust is essentially like a standard crust, but it replaces the butter or lard! We’ve tested this recipe with coconut oil and vegan butter, and either one works. This makes it a super versatile recipe for whatever plant-based butter substitute you have on hand. Here’s the short list of ingredients you need for this recipe:

With the interest in plant based coking these days, it’s becoming easier to find a vegan butter that’s minimally processed to use in recipes like vegan pie crust and vegan biscuits. When you’re shopping for vegan butter, check the ingredient lists and find one that is minimally processed with real food ingredients. Another plus is using organic! We used Miyoko’s Vegan Butter, which is made with mostly cashews and coconut (and happens to be organic).

Whatever the case, do not buy anything marked margarine! Margarine is much too soft to make a pie crust.

You can go either the coconut oil or the vegan butter route for this vegan pie crust, and they both result in perfectly tasty crust! Here’s what we learned while testing these plant based butter substitutes:

It’s helpful to have a few things on hand to make vegan pie crust: though of these items, only the pie plate is required!

What’s a pastry cloth? Why use it? A pastry cloth is a piece of canvas used for rolling out dough, cookies, biscuits and other baked goods. It helps to keep the dough from sticking, and provides helpful lines for cutting out the circle of dough. A rolling pin cover also helps to keep the dough from sticking to the rolling pin. These tools are fairly inexpensive and are very helpful to make the most perfect vegan pie crust. But they’re not required if you don’t have them on hand!

Make ahead and storage instructions: refrigerate or freeze

Once nice thing about a vegan pie crust is that you can make it in advance! You can refrigerate it until baking, or freeze it for later. Here are the storage instructions:

There are lots of ways to use this vegan pie crust recipe! There are pie fillings that are naturally vegan (like apple pie!), or we have a few recipes for vegan pies below.

This vegan pie crust recipe is…

Here’s how to make vegan pie crust! This flaky pastry can be made using coconut oil or vegan butter, and no one would guess it’s plant-based.

Love vegan baking? Us too. Here are a few more vegan baked goods to try: