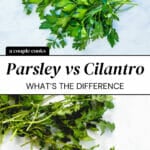 Parsley vs cilantro: what’s the difference between these fresh herbs? Can you substitute one for the other? Here’s the breakdown.

Parsley vs cilantro: what’s the difference? These two fresh herbs look very similar, but the flavors are very different! In fact, we admit: we’ve accidentally bought the wrong one at the store before. But pico de gallo doesn’t work with parsley, just as tabbouleh doesn’t work with cilantro! Here’s a break down on the differences between these herbs and when you can use them as substitutes.

Parsley vs cilantro: the differences

Parsley vs cilantro: how to tell them apart

When you’re at the store, it can be difficult to tell the difference between parsley vs cilantro. Here’s what to do:

Can you substitute one for the other?

Not usually, but in some cases you can! Here’s the rule of thumb when using parsley vs cilantro:

What recipes can you make with parsley?

There are so many ways to use parsley in recipes! Try it in:

Plus, here’s what to substitute for parsley.

What recipes can you make with cilantro?

There are many ways to use cilantro in recipes as well. Some ideas:

Plus, here’s what to substitute for cilantro.

This creamy cilantro dressing tastes incredible! It takes just 5 minutes and you’ll want to use it on everything: salads, tacos, fries, and more.