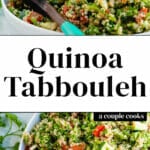 Quinoa tabbouleh is always a hit, starring lemon and fresh herbs! This spin on the classic Middle Eastern salad is an easy healthy side dish.

Are you a tabbouleh fan? This Middle Eastern salad is one of the tastiest salads there is. There’s something about the combination of herbaceous parsley, bright lemon and crunchy tomatoes and cucumber that makes magic. Traditional tabbouleh is made with bulgur wheat, a quick cooking whole grain. But seeing as quinoa is the grain of the moment…why not try it with quinoa? Turns out Quinoa Tabbouleh works perfectly, making a delicious gluten free spin on this classic salad.

Tabbouleh is a Middle Eastern salad that’s made with fresh parsley, bulgur wheat, tomatoes, cucumbers, and seasoned with lemon juice and olive oil. Sometimes spelled tabouli or tabbouli, it’s a staple in Greek, Lebanese and Syrian cuisine. You’ll often see it alongside hummus and baba ganoush in a mezze platter. The fresh brightness of the lemon and parsley are the perfect contrast to more savory and heavy flavors.

There is no “exact” science on how to make tabbouleh because every cook has their own recipe. We researched the traditional ingredients in tabouli and used those as a basic for this quinoa version. The first time Alex and I had tabbouleh was back when we first met, at a Greek restaurant in our college town. I remember falling instantly in love with the herbaceous flavor of tabbouleh. (I fell in love with Alex much later!)

This quinoa tabbouleh recipe is a spin on a traditional tabbouleh using quinoa instead of bulgur wheat! Using quinoa makes this into a gluten-free salad: and you also get all the nutritional benefits of quinoa. The advantage of bulgur wheat is that all you need to do is let it stand in boiling water for 10 minutes. The quinoa cooking process takes just a little longer! But it’s 100% worth the time. Combine the quinoa with these traditional tabbouleh ingredients to make a standout salad:

Curly parsley vs Italian parsley: which to use in tabbouleh?

Why? Curly parsley has more texture. When you chop it, it remains light and fluffy, versus Italian parsley that is perfectly flat and can become soggy. Also: the flavor tastes like what you expect from a Greek or Lebanese restaurant. So lesson learned: use curly parsley!

You’ll need to buy quite a lot of parsley for this recipe. It takes a while to chop 2 cups of parsley: but never fear! All the work is worth it. You can use this How to Cut Cilantro video as a guide.

Make the quinoa in advance if you have time

Cooking quinoa for the quinoa tabbouleh takes about 25 minutes total. You can cook it while you chop the veggies: but the easiest way to do it is cooking it in advance! Here’s why:

Once you’ve cooked the quinoa, tabbouleh is a breeze to whip up! The basic method for this recipe is very easy: cook quinoa, chop veggies, add dressing. But there are a few more things to note:

Once you’ve mixed up a batch of this quinoa tabbouleh, you can use it as a healthy side dish for lunch and dinner recipes throughout the week! It stores refrigerated for about 3 to 4 days, and holds up pretty well.

How to serve quinoa tabbouleh

Tabbouleh is a fantastic healthy and easy side dish or appetizer for all sorts of meals. Some of our grain salad recipes can double as a main dish, but here we’d recommend keeping it as a side dish. It almost feels like a condiment like an Indian raita: it’s lovely to mix into the flavors already on your plate to bring a fresh brightness. Here are some ways we’d serve it!

This quinoa tabbouleh recipe is…

Quinoa tabbouleh is always a hit, starring lemon and fresh herbs! This spin on the classic Middle Eastern salad is an easy healthy side dish.

Leftover note: You can also freeze this recipe. Assemble the tabbouleh without the cucumber and tomatoes and freeze it for up to 3 months. Defrost, then add fresh cucumber and tomato before serving; taste and adjust the salt as desired.