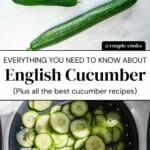 What’s an English cucumber and how is it different from the standard variety? Here’s what you need to know.

The English cucumber is also known as a European cucumber, hothouse cucumber, or seedless cucumber. They’re long, thin cucumbers sold covered in plastic at the store. Here’s what to know about this variety, and how it’s different from the standard variety:

How to store it

It might seem odd that the English cucumber is sold in plastic wrap, but it’s necessary because of its very delicate skin. When you’re at the store, grab a cucumber that feels firm to the touch along its entire length. Store it in the produce drawer in your refrigerator with the plastic wrap on. It stays good for about 1 week refrigerated in the plastic wrap.

Cucumbers are very low in calories. One English cucumber has about 50 calories, depending on the exact size. This equates to about 2 cups of sliced cucumbers. The low calories are in part due to the water content: a cucumber is 96% water!

Cucumber also includes a large amount of nutrients, most of which are contained in the peel (source). This makes English cucumbers a good choice: because they don’t need to be peeled before eating!

English cucumber is our preferred variety to use in recipes because of its sweet flavor: and because you don’t need to peel it or remove its seeds! Here are a few ways to use English cucumbers in recipes: 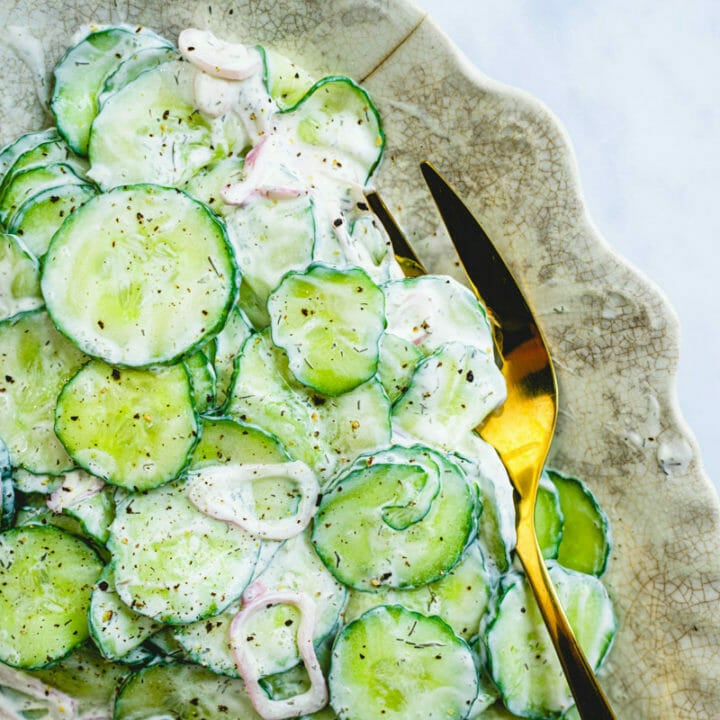 English cucumbers are perfect for cucumber salad! Adding a bit of sour cream makes an irresistibly creamy sauce. The silky sauce also features dill and shallots. While it has a summery vibe, this tasty salad works any time of the year. 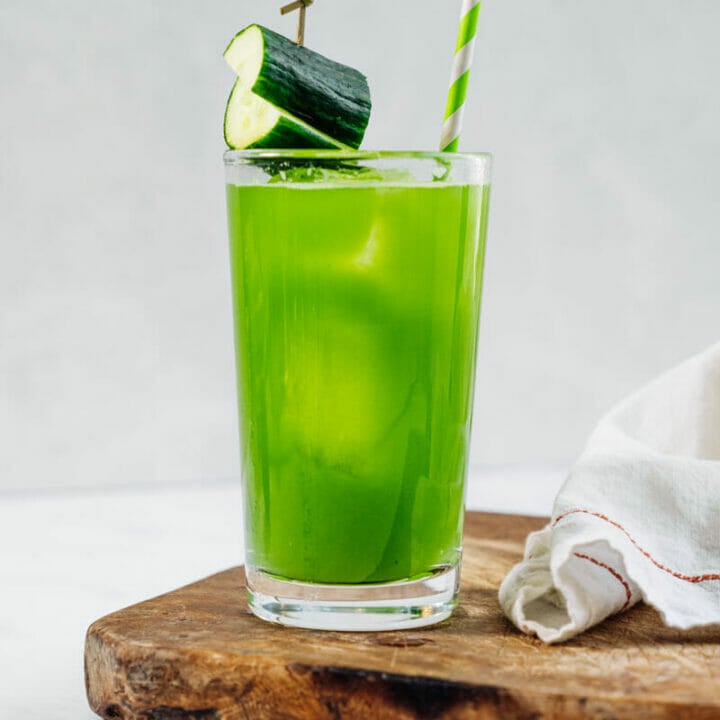 Here’s a great way to use E:nglish cucumbers: in cooling cucumber juice! This tasty vegetable juice is hydrating and full of spa-like flavor. Combine it with green apple for a tasty natural juice that’s ultra refreshing. Throw in the entire English cucumber with no need to peel. 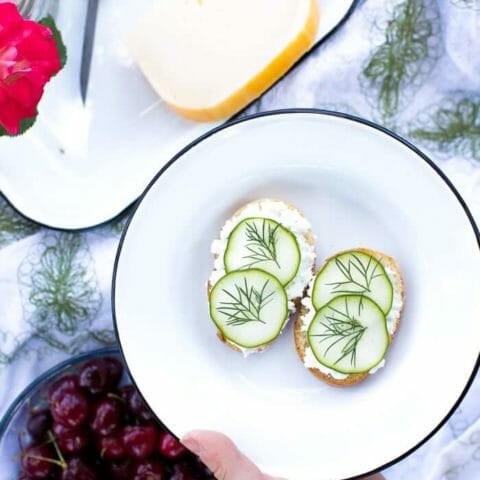 English cucumbers are great for sandwiches as well! These are a bit of a retro snack, served in the 1950's on those little cocktail breads slathered with cream cheese. But they go back even further than that: cucumber sandwiches come from Britain and were served as tea sandwiches. 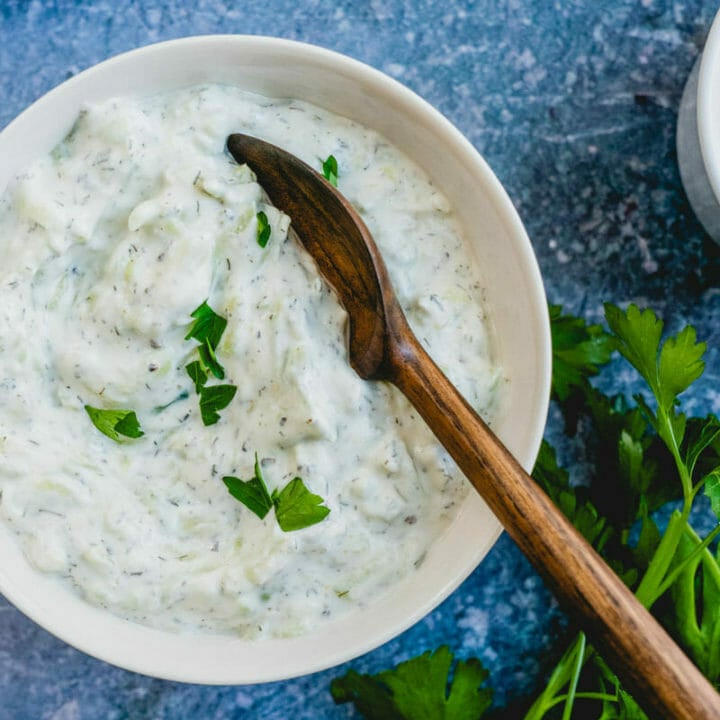 English cucumbers are also fantastic in sauces. Stir together shredded cucumber with Greek yogurt, lemon, garlic, and dill, and it’s nothing short of a revelation. It works on falafel, sandwiches, burgers, or even grilled veggie platter. 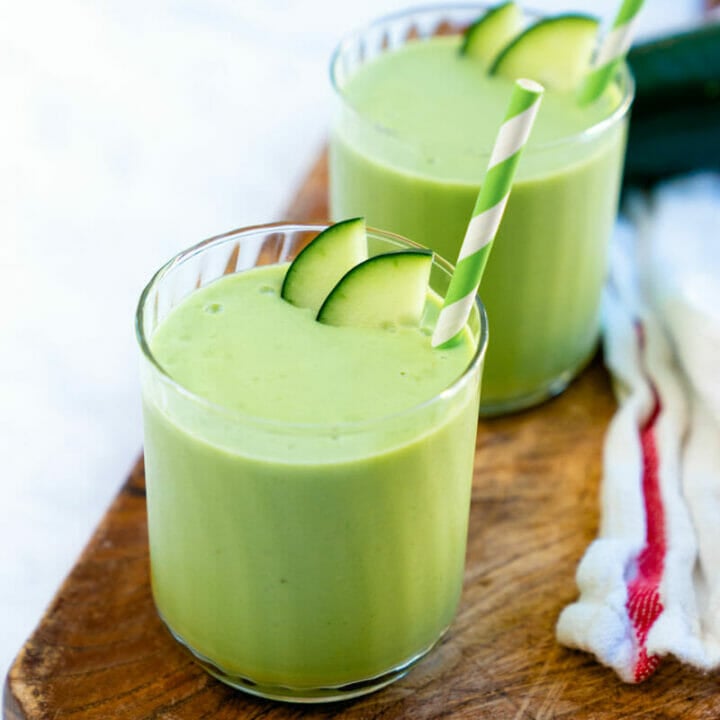 Cucumber isn’t the most likely ingredient in a smoothie. But it adds an intriguing, spa-like flavor to the puree! This tasty ingredient is full of nutrients and water to make your smoothie taste even better. It’s perfectly creamy and a great way to load up on nutrients as a healthy snack or breakfast. 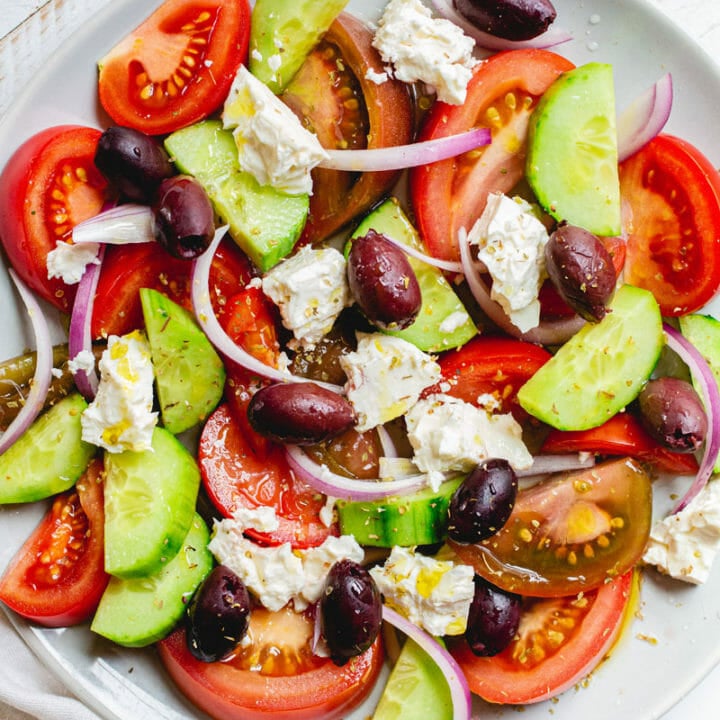 Another great way to use English cucumbers? Greek salad! There’s not much that tastes more refreshing than the combination of juicy tomatoes, cool cucumbers, red onion, Kalamata olives, and salty feta. This salad is the traditional Greek way (no lettuce!) and relies on juicy cucumber for its hydrating crunch.

Here’s an ultra refreshing side dish: English cucumber salad with sour cream! The silky sauce with dill and shallots brings an irresistible flavor.