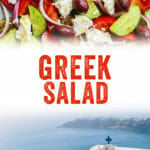 After our recent trip to Santorini, what better an inspiration to take home than the ubiquitous Greek salad? Nearly every restaurant we encountered in Greece serves this salad. And in the hot Grecian sun, there’s not much that tastes more refreshing than the combination of tomatoes, cucumbers, red onion, Kalamata olives, and salty feta. While in country, we learned a bit about how an authentic Greek salad is made. Got ripe fresh tomatoes? This is the recipe for you. Keep reading for all our “secrets.”

There are lots of versions of Greek salad here in America, and many of them are not so “authentic”. First of all: Greek salad isn’t served with lettuce. I grew up thinking that Greek salad was a romaine lettuce-based salad served with sliced black olives and a few feta crumbles. Oh, and usually some pink, mealy tomatoes too. Not in Greece!

Here are the elements of an authentic Greek salad:

For our version of the classic salad, we crumble or cut the feta into cubes. While it’s traditional to serve the feta in a big block on top that’s broken with a fork, we find it’s easier to serve it to multiple people with the cheese broken. You can use either method for the feta: both are delicious!

Like any simple recipe, you’ll find that Greek salad is 100% dependent on the quality of the ingredients. So for this easy salad, you’ll need ripe, in season tomatoes! Bonus points if they’re locally grown — or if you grew them yourself! Buying local tomatoes helps support your local farmers: so if there’s a chance to do so, we heartily recommend it. If call you can find is off-season, mealy pink tomatoes, do not even think about making this salad! The flavor here is 100% dependent on the quality of your tomato.

Equally as important is the feta cheese you purchase. Skip the pre-crumbled stuff, and go for a block of full-fat feta cheese. Alex and I have found that this kind of feta has the best flavor, and it’s most like the feta served in Greece. You also want to avoid feta that’s made from cow’s milk, as that’s not true feta. It crumbles more easily, which isn’t what you want.

If you can find it, Greek feta (feta made in Greece) has incredible flavor; we’ve found it at our local grocery store. We’re also lucky here in Indianapolis to have locally-made feta from an artisan cheese maker (Caprini Creamery), so if you have access to local feta, that’s a great option too.

How to serve Greek salad

I have a confession: I am a former tomato hater. Perhaps you know one, or are one yourself. Those pink, out-of-season tomatoes from my youth turned me off until I was nearly a quarter of a century old. It wasn’t until I discovered ripe, red local farmer’s market tomatoes that I was able to overcome my distaste. If you’re on the fence or have been looking to work up the courage on tomatoes, this Greek salad with some ripe summer tomatoes is a great place to start.

Often, we’ll eat this Greek salad as a side-dish for a grilled meal on the patio in the summer, or bring it out first as an appetizer. It’s also tasty as a simple lunch with some crusty bread and olive oil. Alex and I made this version with local tomatoes and cucumbers, and it was divine.

Ways to switch up this Greek salad

There are numerous variations on the salad (like our recipe for shepherd’s salad). Some Greek salad recipes are made with green pepper, or a block of feta instead of crumbled. As we mention below, you can also add capers. Feel free to switch up this Greek salad as much as you’d like — skip the olives if you’re not a fan, or use cherry tomatoes or heirloom tomatoes. It’s easily customizable to your tastes.

Outside of this Greek salad, here are a few more recipes inspired by our trip to Greece:

This Greek salad is vegetarian and gluten-free.