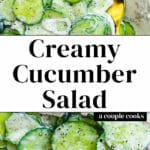 Here’s an ultra refreshing side dish: creamy cucumber salad with sour cream! The silky sauce with dill and shallots brings an irresistible flavor.

I grew up eating cucumber salad with vinegar: a tangy, savory sweet salad of thin crunchy cucumbers. The moment that summer hit, this salad was on the menu for Sunday dinners and potlucks. It’s so refreshing: in fact, it’s hard to stop eating! Alex and I have found a new variation that we’re big fans of: this creamy cucumber salad with sour cream! Adding a bit of sour cream makes an irresistibly creamy sauce. While it has a summery vibe, this delicious salad works any time of the year.

What’s in this creamy cucumber salad?

There are just a few ingredients you’ll need for this cucumber salad with sour cream. Here’s the breakdown:

How to make creamy cucumber salad with sour cream

Step 1: Make and refrigerate the sauce.

The sour cream sauce in this cucumber salad needs some time to refrigerate so that the flavors can meld. Throw together the sour cream with the flavorings (shallot, vinegar, garlic, salt and pepper), then pop it in the fridge while you drain the cucumbers.

Step 2: Salt and drain the cucumbers.

Cucumbers are made of mostly water. So in this creamy cucumber salad, it’s important to let some of that moisture drain off before you add it to the creamy sour cream. To do so, you’ll cut the cucumber into paper thin slices. Then place them all in a colander and add some generous pinches of salt. This draws out the moisture in this veggies! It will drain out of the colander, and you can pat the slices dry with a towel before using them.

And that’s all! Just mix together the two components and you’ve got one very delicious cucumber salad with sour cream.

One thing to note about this creamy cucumber salad. Because cucumbers are made of water, they become more watery as they sit. This cucumber salad becomes watery after 2 hours of sitting. So if you want to make it ahead, there’s a simple fix: make the cucumbers and sour cream sauce in advance and store them in separate containers in the refrigerator. Then mix the salad together directly prior to serving!

Another name for it? Mizeria.

Mizeria is another name for this salad. Mizeria is a Polish creamy cucumber salad that’s made with cucumbers, sour cream, lemon juice or vinegar, sugar, and dill. Usually fresh dill is used in the salad, but otherwise it’s very similar. It’s one of the most popular salads in Poland. Tell us: did you grow up eating this salad?

Cucumber salads are quite common in different cuisines around the world! Here are our favorites:

This creamy cucumber salad with sour cream recipe is…

Here’s an ultra refreshing side dish: creamy cucumber salad with sour cream! The silky sauce with dill and shallots brings an irresistible flavor.

Want more salads? Here are some of our best salads and summer sides: