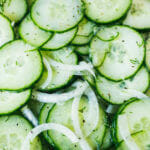 This refreshing German cucumber salad (gurkensalat) is a summer tradition: thinly sliced cucumbers and onions in a vinegary dressing.

Growing up, German cucumber salad meant summer. There wasn’t a meal that this cucumber salad couldn’t complement. Because of my dad’s German heritage, he called it gurkensalat. Alex’s family was decidedly less fancy, and simply called it “pickles”. Whatever you call it, a good cucumber salad can’t be beat in the summer. Here, we’re sharing my family’s gurkensalat recipe, tweaked a bit for our taste. It’s easy to prepare, and requires only a few ingredients. It’s a great accompaniment to a summer meal: perhaps some grilled salmon or burgers?

Or, try it creamy! Try our Cucumber Salad with Sour Cream.

How to make German cucumber salad

German cucumber salad is easy to make, but it does take a little patience. Here’s what you need to know:

Video: How to cut an onion

What speeds up the prep in this German cucumber salad is your knife skills! You’ll need to know how to properly slice an onion. Here’s our step by step guide for how to cut an onion, including a video of me cutting an onion in our kitchen. Fast forward to the slicing an onion step: typically we slice our onions into half moons for this cucumber salad.

This German cucumber salad is perfect for summer meals! Here are some of our favorite mains that would pair well with this salad:

Cucumber salads around the world

Cucumber salad is enjoyed in many nations of the world! Here are a few different spins using the hydrating cucumber as a base:

This German cucumber salad recipe is…

This refreshing German cucumber salad (gurkensalat) is a summer tradition: thinly sliced cucumbers and onions in a vinegary dressing.

Looking for more easy side dishes?﻿

Outside of this German cucumber salad, here are a few more favorite summer side dish recipes: