Quinoa vs Rice: Which is Better? 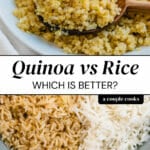 What are the differences between quinoa vs brown rice? Which is healthier? Here’s what you need to know about these powerhouse whole grains.

Quinoa vs rice: which is better? Let’s ponder for a moment. These powerhouse whole grains are both part of a healthy diet. But is there a clear winner between the two? What are some of the major differences? Here’s a breakdown.

First up, let’s discuss the definition of each of these grains. In fact, one of them isn’t a grain at all.

Next, let’s review the nutritional differences between quinoa and rice. Here’s the basic nutrition facts for 1 cup of cooked quinoa vs 1 cup cooked rice:

To understand the full picture of quinoa vs rice, you also have to look at nutrients! Here’s the breakdown on nutrients:

Another measure to look at is glycemic index. The glycemic index score (GI) shows how a food affects a person’s blood sugar levels. A low score indicates that the food has less impact on your blood sugar, so low levels are good here. This is specifically relevant for people with diabetes. Scores range from Low GI: 1 to 55, Medium GI: 56 to 69, and High GI: 70 and higher. (Read more at Mayo Clinic.)

So quinoa vs rice: which is healthier?

Reference the table above and you can see the following differences between quinoa vs brown rice:

Bottom line: Quinoa and brown rice are both part of a healthy diet! There are several benefits to quinoa: it has more protein and fiber than brown rice. Quinoa is also considered a low glycemic index food, whereas brown rice has a medium-level GI score. Quinoa does have slightly more fat than rice, but they are both low fat foods.

Another takeaway: skip the white rice! White rice has much less nutrients than both quinoa and brown rice and virtually no fiber, making it a lesser option in terms of nutrition.

Here are a few of our favorite recipes for quinoa and brown rice!