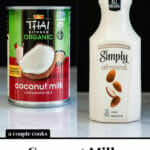 Coconut milk vs almond milk: is one better? When to use each? Here’s what to know about these non-dairy milks.

Coconut milk vs almond milk: which is better? When should you use one or the other? Both of these non-dairy milks are great options: it just depends on what you’re looking for! Here’s what to know about when to use them and their nutritional profiles.

What are the differences between these two products? Here’s the general breakdown:

Coconut milk vs almond milk: is one healthier?

Is there a better choice between coconut milk and almond milk? Well, it all depends on what you’re looking for. Both of these dairy-free milks can be part of a healthy diet. Here’s a breakdown of the nutrition info per 1 cup serving:

How to use each in recipes!

With all of that in mind, here are some of the best ways to use these products!

Got coconut milk or almond milk to use up? Here are some great recipes using both: