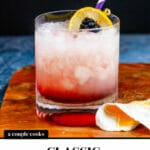 Here’s a special cocktail that solidified itself as a new favorite at first sip: the Bramble cocktail! This drink has the sweetest name and it’s full of tangy, fruity and sophisticated flavors. This refreshing drink uses a special blackberry liqueur called creme de mure. It might not be on hand in your liquor cabinet, but it should be: one swig is like a bite of fruity blackberry candy! This drink is one of the great modern classic gin cocktails…and to us, it’s near perfection in a glass.

The Bramble is a modern cocktail made with gin, lemon juice, simple syrup, crushed ice, and drizzled with a blackberry liqueur called creme de mure. It was invented in 1984 by a British bartender named Dick Bradsell, who worked at Fred’s Club in London’s Soho district. Apparently Dick wanted to create a cocktail in honor of his memories of blackberry picking as a child. Man, does this drink deliver! (Fun fact: Dick also invented the Espresso Martini back in the 1980s, another modern classic drink.)

The Bramble has solidified itself as a modern classic and made the list of International Bartender Association’s IBA official cocktails, meaning that it has an “official” definition. The ingredients in a Bramble cocktail are:

What is Creme de Mure? Is it worth buying?

The star of the Bramble cocktail is the Creme de Mure (or Crème de Mûre, if you’re a purist). The minute I tried a sip of the stuff, I shouted out loud. The flavor is so beautifully fruity and sweet tart, it’s like a larger than life version of a blackberry candy. Apparently when this cocktail’s inventor tried Creme de Mure for the first time, he had a “moment” and was immediately transported back to his fruit picking childhood (read about it here). Here’s what to know about this special liquor:

What is a Creme de Mure substitute?

Can’t find Creme de Mure for the Bramble? Or don’t want to buy a whole new bottle for your liquor cabinet? That’s ok too. Here are a few possible substitutes for Creme de Mure:

The other special ingredient in a Bramble cocktail is crushed ice! Crushed ice is essential to the texture of the drink, making it ice cold with a slushy texture. Making crushed ice is a little harder than you might think: but you can easily make it using your blender. Here are a few tips on how to make crushed ice:

How to make a Bramble cocktail

Once you’ve got that Creme de Mure and crushed ice, the Bramble cocktail is a breeze! Here’s what you need to know:

There aren’t lots of drinks that use blackberry liqueur, but here are a few drinks that are related to the Bramble cocktail!

When to serve a Bramble cocktail

Some people have claimed the Bramble cocktail is a spring cocktail, but we think you can make it any time of the year! It’s great as a: