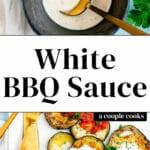 This zingy white BBQ sauce hails from Alabama and tastes incredible on just about anything! It’s creamy and savory, with a little heat.

If you live in the Southern US, you already know the phenomenon that is white BBQ sauce. Yes, you can use this Alabama-style white sauce just like a red BBQ sauce: for basting, grilling and drizzling! It’s got a unique, creamy flavor and spicy finish: think black pepper and horseradish. Alex and I whipped up a batch and fell in love immediately. Our first use was on a platter of grilled eggplant, then we started splattering it on just about everything.

What is white BBQ sauce?

White BBQ sauce is a tangy, mayo-based sauce was invented by a man named Bob Gibson in 1925 in Decatur, Alabama. At his restaurant Big Bob Gibson Bar-B-Q, he would smoke chickens and douse them in his homemade white sauce. (More about Bob is here: you can buy his original sauce too!) It caught on, and now people in Alabama think of a white sauce when they think of grilling.

What it’s made of

Mayonnaise is the main ingredient in this magic sauce: it’s what brings the creamy body. All homemade recipes vary, of course: Bob would never give away his secret recipe! White BBQ sauce is made of:

There are so many ways to serve white BBQ sauce, from traditional to more unique! Of course, it was developed to go with pork and chicken: so we’ll start there. But there are so many more creative ways to use this sauce on vegetables. Here are some ideas:

Are you into eating plant-based? If you plan to use your white BBQ sauce on vegetables, you can easily make it vegan by using vegan mayo and using pure maple syrup instead of honey. Vegan mayonnaise is easily accessible at most major grocery stores or online. If you can’t find it, substitute cashew cream.

Throw this white BBQ sauce into a sealed jar, and you can keep it as long as opened mayonnaise lasts. That’s about 3 months…but it won’t last that long! (Promise.) You may want to double the quantities below if you’d like to have a good amount of leftovers.

Vegetarian, dairy-free and gluten-free. For vegan and plant-based, use vegan mayonnaise or substitute cashew cream for the mayo.

This zingy white BBQ sauce hails from Alabama and tastes incredible on just about anything! It’s creamy and savory, with a little heat.

*Easy to double as needed to make more for storing.

There are lots more ways to make BBQ sauce, from traditional to unique! Here are a few more we love: