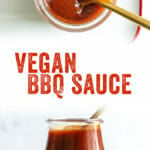 Why buy a vegan BBQ sauce when you can make it at home? It tastes way better than store bought: oh and it takes just 10 minutes!

BBQ sauce: make it or buy it? While of course it’s a tad easier to buy a store bought barbecue sauce, let us be the first to assert that this vegan BBQ sauce will make you into a believer. The flavor is so tangy and savory that you’ll be convinced at first bite. Even better, it’s seriously easy to make: it’s just a matter of tossing a few things into a pot and simmering for 10 minutes. Most of the ingredients are things you’ll already have in your pantry! Alex and I were surprised of how much flavor comes out of these simple ingredients…and it turns out as a relatively healthy barbecue sauce too. If you’re ready, then we’re ready: let’s make this vegan BBQ sauce!

How to make vegan BBQ sauce

Now, a few of the reasons we love to make our own vegan BBQ sauce at home. First, the flavor: which we’ve covered above. Second, you can control the ingredients that go into your sauce, so you don’t have loads of sugar or preservatives. So, it makes for a relatively healthy barbecue sauce. And finally, of course: it’s seriously easy. Just a few things into a pot and a quick simmer and you’re done.

What makes a BBQ sauce not vegan? Well, it’s basically a spiced-up form of ketchup. The main ingredients that would make a barbecue sauce not vegan are honey and Worcestershire. To make this a vegan sauce recipe, we’ve used maple syrup and soy sauce instead.

We liked to use an organic or natural ketchup. Take a look at the ingredients on the container and make sure there isn’t anything weird like additives, preservatives, or high fructose corn syrup.

Ways to use vegan BBQ sauce

Of course, there are a multitude of ways to serve vegan BBQ sauce. Here are some of our favorite vegan recipes that can benefit with a bit of barbecue sauce:

Looking for other sauce recipes?

Outside of this vegan BBQ sauce recipe, here are few more of our favorite homemade sauce recipes:

Why buy a vegan BBQ sauce when you can make it at home? It tastes way better than store bought: oh and it takes just 10 minutes!