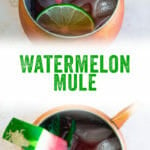 Why have a Moscow mule or Kentucky mule when you can have a…watermelon mule? This unique spin on the classic cocktail is light and refreshing.

Ready for a summer version of your favorite Moscow mule? Meet this watermelon mule, a refreshing cocktail with a light watermelon essence! Alex and I have been making a lot of drink recipes lately, and what I’ve realized is that all things are more fun with a signature drink. “Want to come over and hang out on the deck?” is infinitely better by saying, “Want to drink watermelon mules on the deck?” Here’s how to make this tasty spin on the classic.

How to make a watermelon mule

This watermelon mule has a subtle watermelon flavor, and is a light and refreshing version of a Moscow mule. The concept behind this version of the classic drink is using equal parts ginger beer and watermelon juice, instead of straight ginger beer. This brings in the essence of watermelon and lightens the flavor just a bit. Then, it’s got the traditional ingredients: vodka and lime juice.

Because a mule is all about the carbonation in the ginger beer, this drink is not mixed in a cocktail shaker like our gin & watermelon cocktail and watermelon vodka drink. To preserve the carbonation, it’s simply mixed right in the mug and served over ice.

In this recipe, we’ve called for the quantities for one drink, because it’s mixed right in the cup. One drink requires only ⅓ cup watermelon juice, but that’s such a small quantity that you’ll want to make more: since you’re probably serving more than one drink at a time! So, scale up the amount of watermelon juice to fit the number of drinks you need.

Does a mule have to be served in a copper cup?

Even if you only dabble in cocktails, you’ll probably know that a Moscow mule is traditionally served in a copper cup or copped mug. But does this watermelon mule have to be served in copper? A purist would say that yes, a mule must be served in a copper cup. One of the reasons is that copper keeps the drink cool in a different way than glass. The copper immediately takes on the temperature of the drink, and the cool copper rim gives a cold sensation when taking a sip.

Probably the most important reason for serving a mule in copper is this: tradition! The drink was invented in the 1940’s, and according to this source, was a clever marketing scheme to sell more vodka, ginger beer, and copper mugs. Whatever the case, people in Hollywood fell in love with the drink and there were many images of people shown drinking Moscow mules out of copper mugs. It caught on, and is popular to this day! (Who needs Instagram to start a trend?)

Of course to us, a mule doesn’t have to be served in copper at all! Whatever glass you use, it will still be a mule. However, it’s just plain fun to serve in the copper. Get it: Moscow mule mugs | Amazon

And that’s it: how to make a watermelon mule!

Head down to our recipe below! And let us know if you try it out in the comments — we’d love to hear what you think.

Watermelon is one of the most hydrating, nutrient-dense summer fruits! Outside of this watermelon mule, here are a few of our favorite recipes with watermelon:

This watermelon mule is…

Why have a Moscow mule or Kentucky mule when you can have a…watermelon mule? This unique spin on the classic cocktail is light and refreshing.

Outside of this watermelon cocktail recipe, here are a few more of our favorite drink recipes: