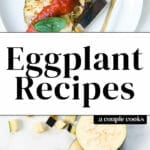 When cooked correctly, eggplant can be incredibly tender and flavorful! Here are all the best eggplant recipes to eat it, from marinara to grilled.

Eggplant is one of those vegetables you have to know how to cook correctly. But when you: it’s incredibly delicious! It’s used in lots of styles of cuisines, from Mediterranean to Asian. Here at A Couple Cooks, we’ve been on a hunt for the best ways to eat it. If you’ve got a few eggplant on hand you’re looking to use: you’ve come to the right place!

Here’s a list of the our best eggplant recipes: from grilled to roasted, from doused in marinara sauce to spread with pesto in a sandwich. When it’s done right, it can be elegant and crowd pleasing. 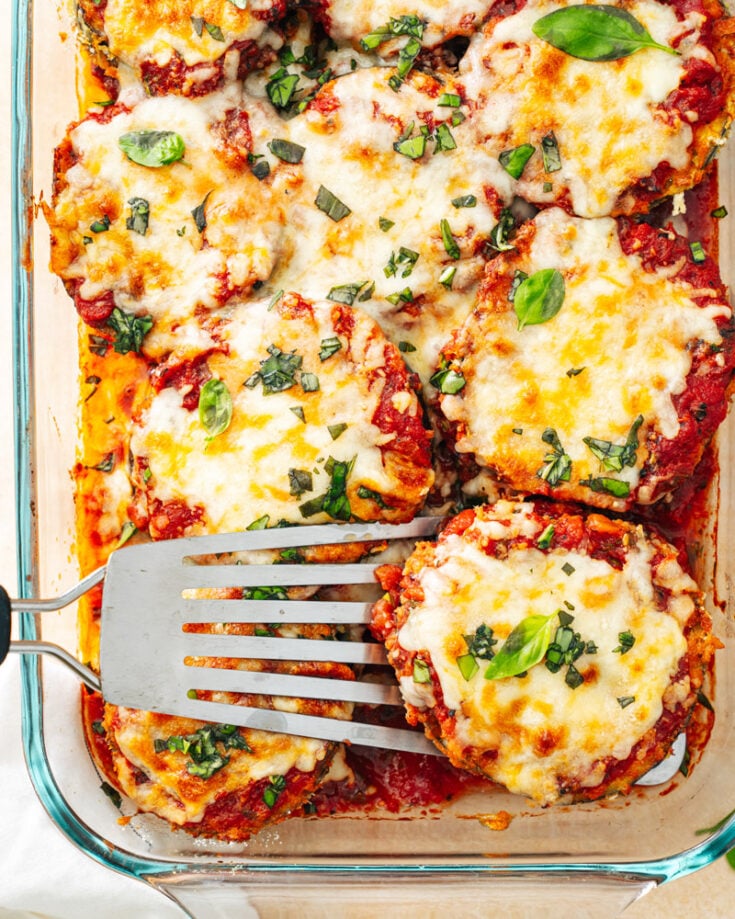 It’s got bubbly cheese, garlicky tomato sauce, and savory, meaty breaded eggplant: it’s Eggplant Parmesan! This popular eggplant recipe is hearty, filling, and pleases just about everyone. Most restaurants use fried eggplant, but for a homemade version it’s much simpler to bake. This spin is even faster and easier to make at home than most recipes and full of incredible flavor. 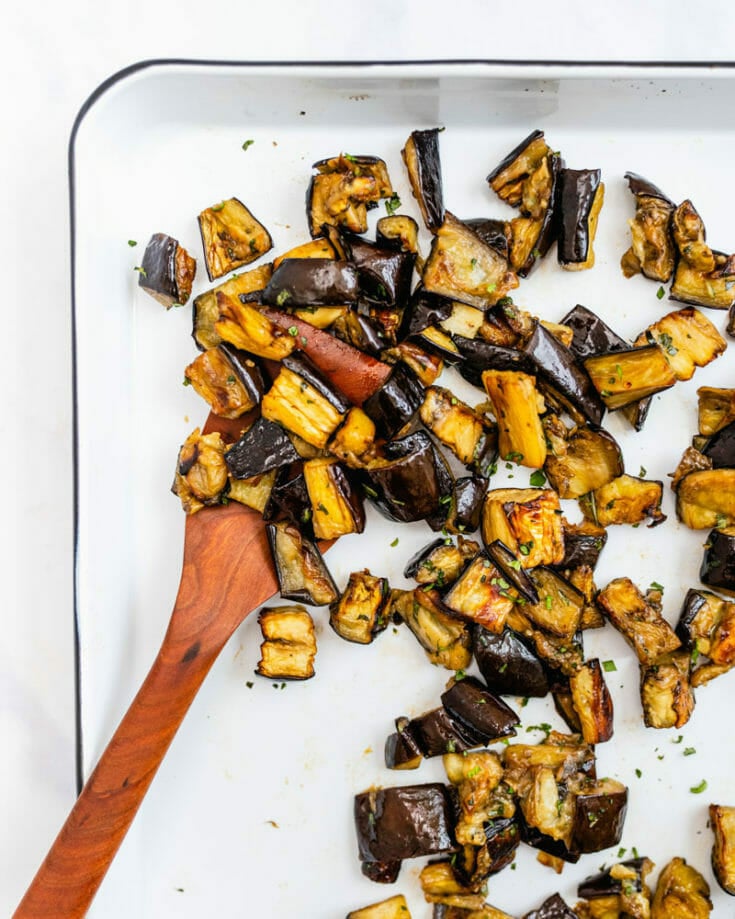 Wow, is this roasted eggplant full of flavor! Roasting until it’s tender makes for unreal savory flavor. Take one bite and you’ll be singing it’s praises too (promise!). It’s simply seasoned, with salt, pepper, garlic, and basil. This recipe works for diced or sliced. Serve it as a side dish, or toss it with pasta for a tasty dinner! It transforms into Roasted Eggplant Pasta in a flash. 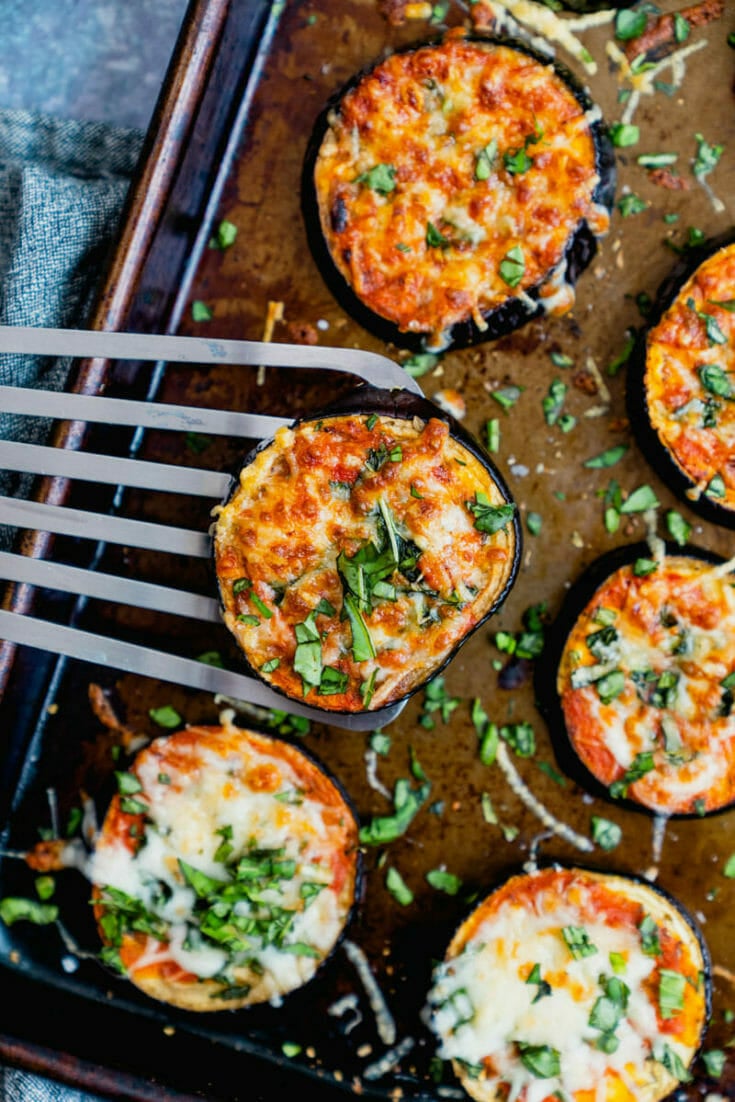 Here’s a tasty eggplant recipe that’s stolen our hearts: eggplant pizza! No, it’s not pizza with eggplant on it. It’s pizza crust made of roasted eggplant! Yes, “pizza” is perfect for busy evenings when you don’t have energy to make a pizza. It’s a healthy, naturally gluten-free pizza that’s loads quicker than the standard. Top it with whatever you like, and it’s a quick, whole foods way to get dinner on the table fast. (Or a late night snack.) 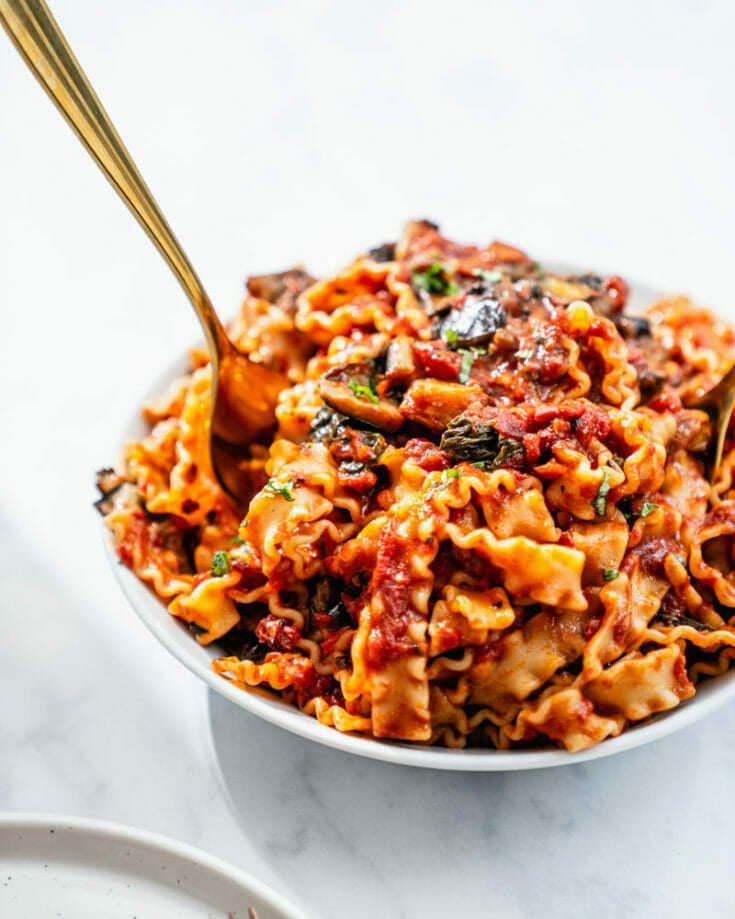 This eggplant pasta has got it all! It’s packed with savory and zesty flavor: tender roasted eggplant, zesty marinara sauce, and peppery basil. It’s 100% plant-based, but lacking nothing in flavor. Even better, this Mediterranean-style dinner is incredibly versatile: it works for weeknights and for serving to company! There’s something about it that’s cozy but elegant at the same time. Curl up with your honey and make it on an evening in…or serve it on a big platter as a family dinner! 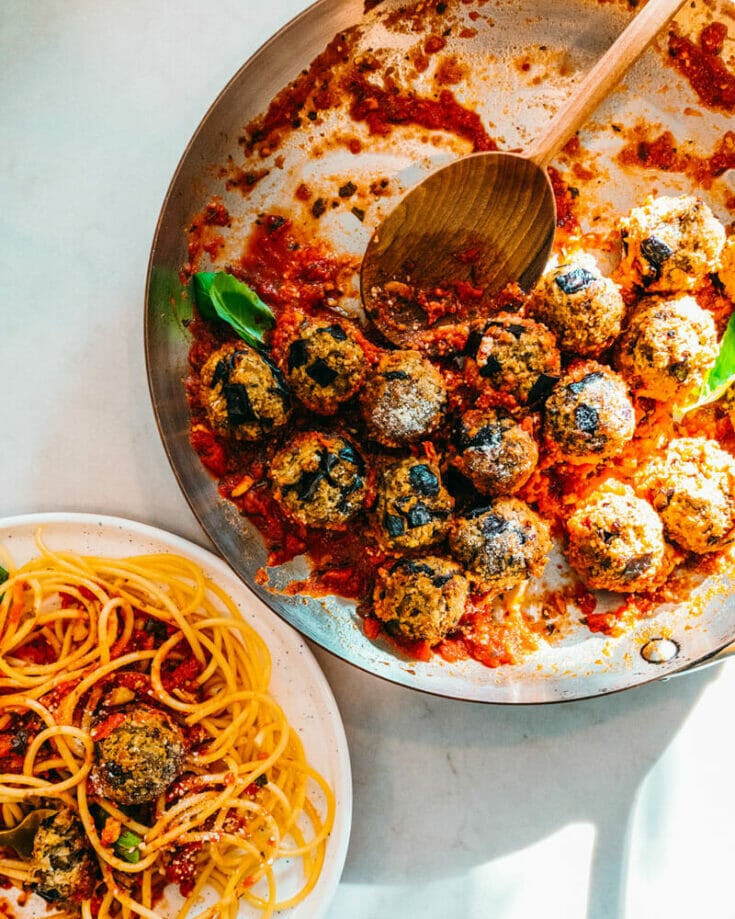 Ever tried making meatballs…with eggplant? Try this amazing eggplant meatballs recipe! Garlic, herbs, breadcrumbs and Parmesan cheese make one insanely juicy and savory meatball. Roasted eggplant makes them moist and textured, vs dry or mushy like lots of vegetarian balls. Combine it with marinara sauce and it’s out of this world delicious. 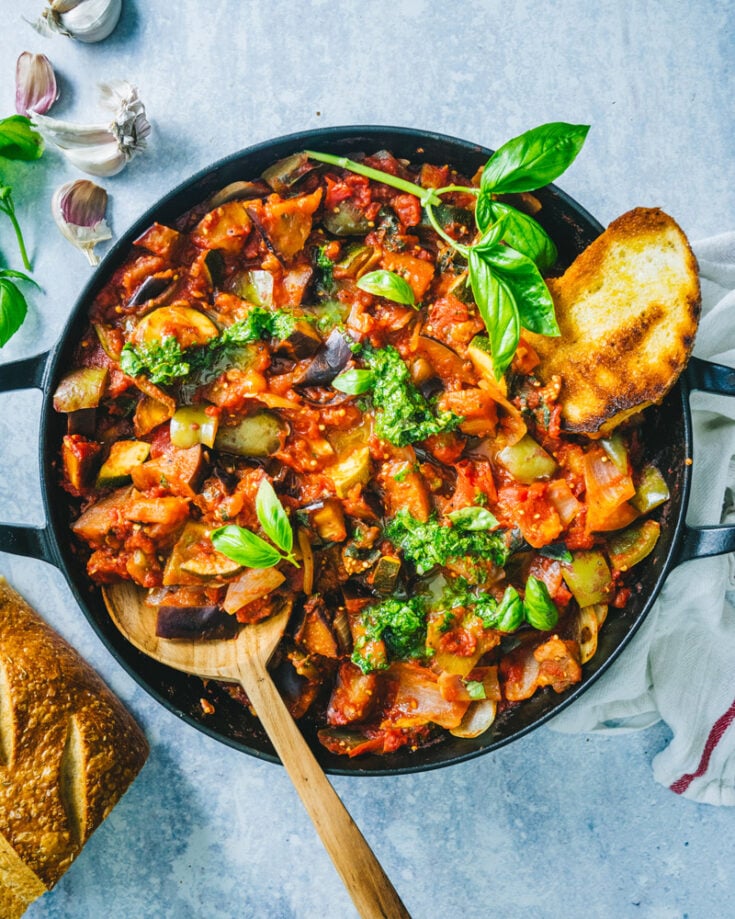 Sure, you’ve heard of the Ratatouille movie: but do you know what ratatouille actually is? This humble dish that’s not anything like it’s glamorized movie version. This classic French dish of stewed late summer vegetables is anything but fancy, but it’s a darn good way to use eggplant! Dollop with pistou, the French version of pesto. 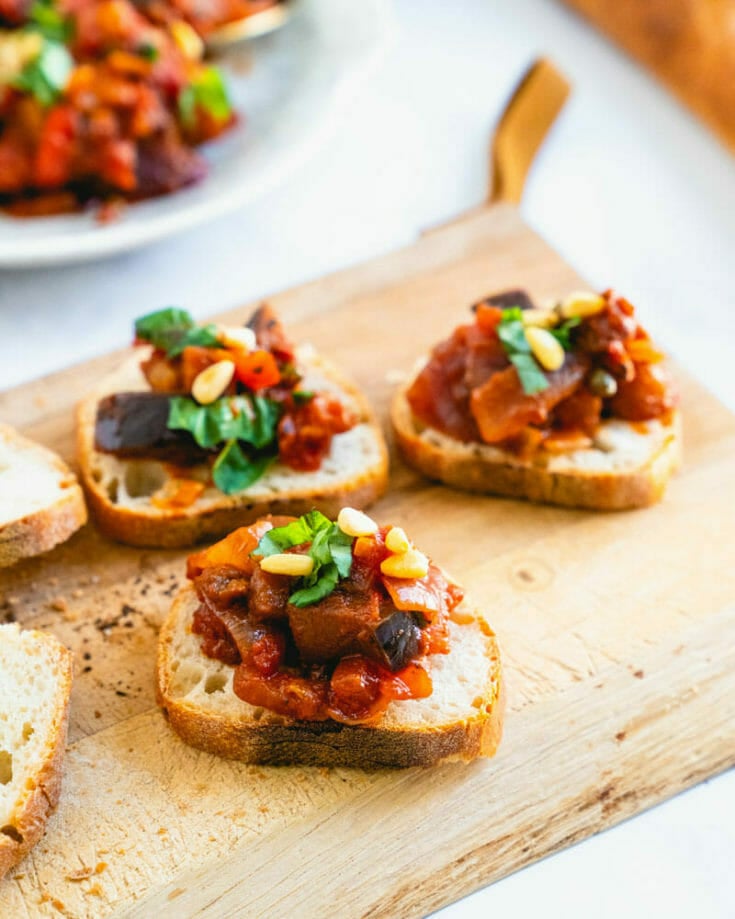 Here’s a new appetizer that we’re head over heels with: caponata! What’s caponata, you ask? This Sicilian specialty is an appetizer and a side dish, essentially a sweet and sour ratatouille with cooked eggplant, tomatoes and onion. It’s often spread on crusty bread as an appetizer or antipasti (as the Italians would say). It’s so full of tangy, garlicky flavor that once you’ve taken one bite, you’ll likely want to devour the entire serving dish! 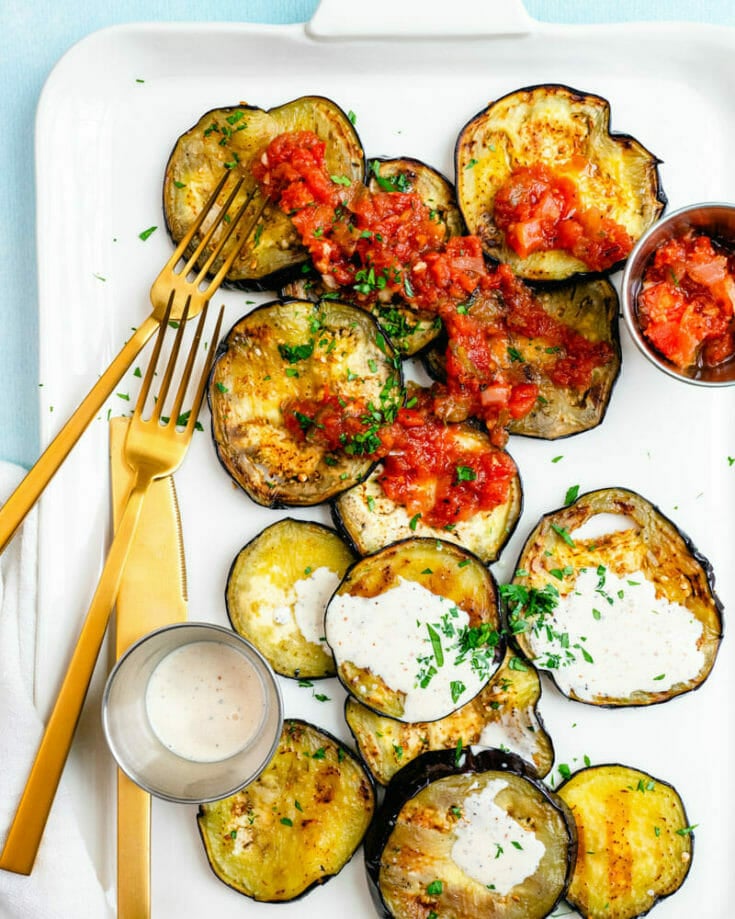 You’ve got to try this grilled eggplant: it comes out smoky and tender, lightly charred and full of flavor. Top it with a sauce and you’ve got a killer summer side dish or appetizer! If you'd like, try with these sauces: a fresh tomato salsa fresca, and a creamy, lightly spicy white BBQ sauce. The combination of the two is spot on. 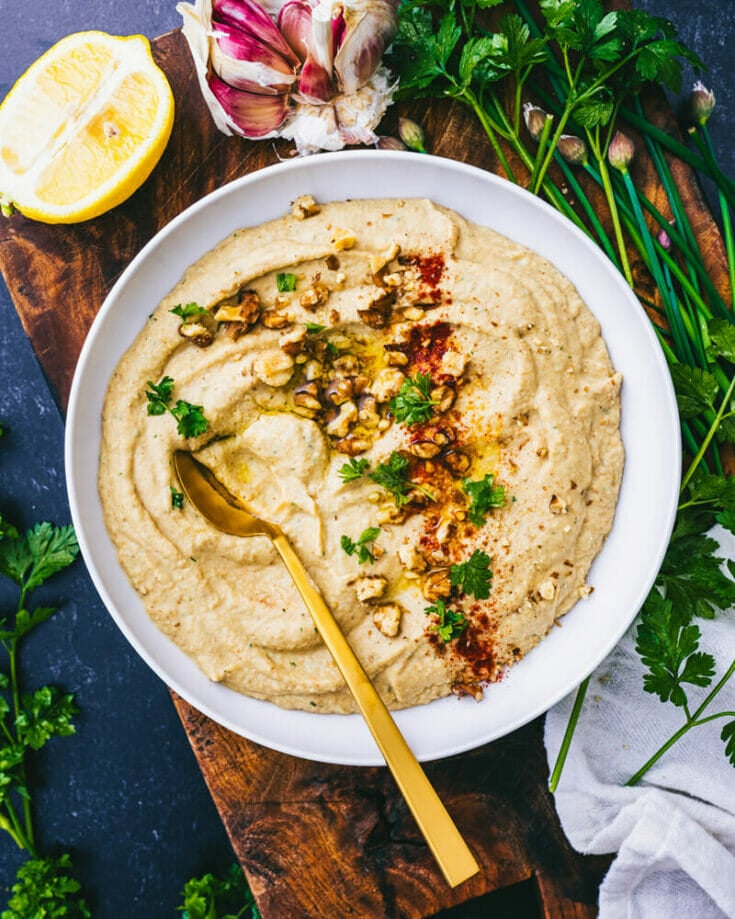 Baba ganoush lovers, unite! This creamy dip is a Lebanese classic with a smoky finish to the flavor that makes it absolutely irresistible for dipping. Turns out, it’s actually very simple to make at home, and a fabulous eggplant recipe for when you’re brainstorming what to do with this vegetable. Whiz it with tahini and lemon and prepare to be amazed. 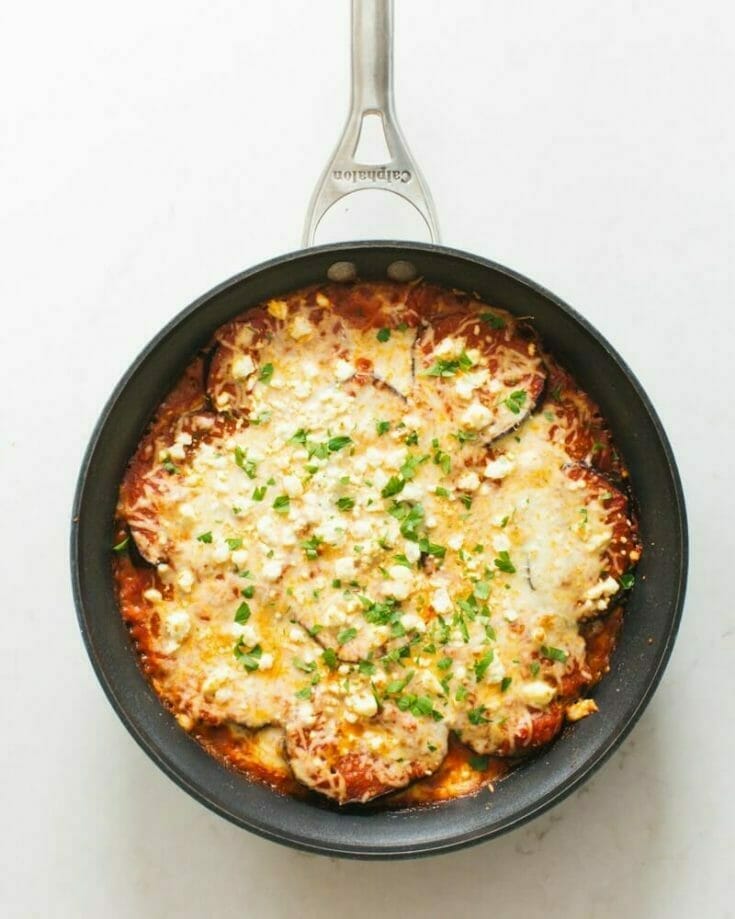 First up in our tasty eggplant recipes: eggplant marinara! This recipe is an easy spin on eggplant Parmesan: it skips all the breading and frying and piles all the ingredients into a large skillet! It’s got eggplant, mozzarella and Parmesan cheese, cooked in a skillet with a super flavorful marinara sauce. Serve with pasta for a delicious dinner recipe everyone will love! 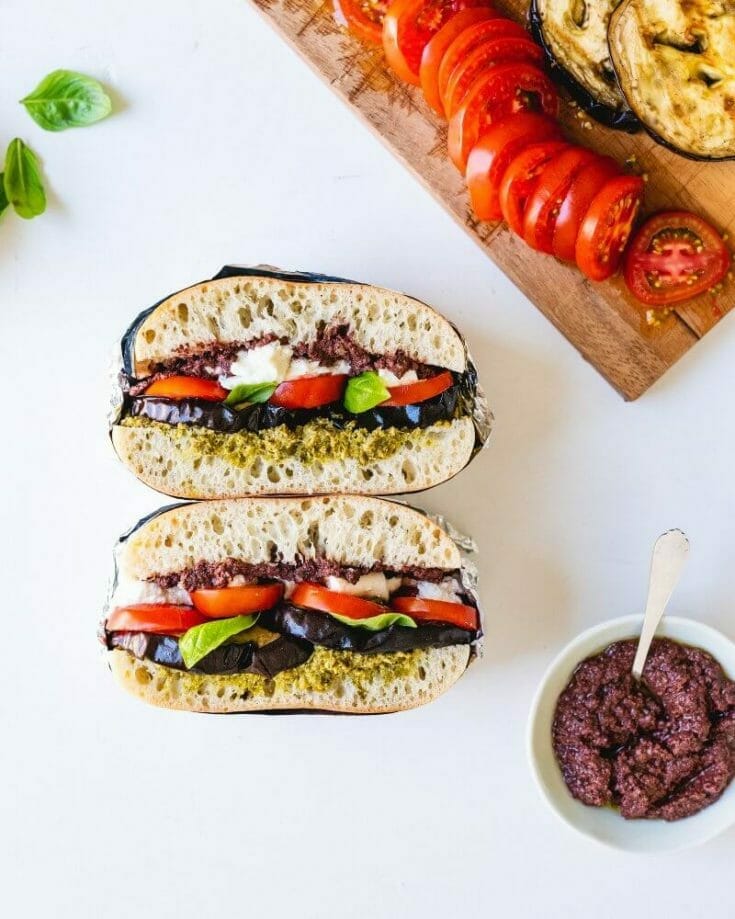 Here's another grilled eggplant recipe: this time in sandwich form! It features ripe, juicy tomatoes alongside smoky grilled eggplant, creamy fresh mozzarella, basil pesto, and our secret ingredient: olive spread. It's based on a sandwich we had a sandwich shop in Pisa, Italy, and it's so bursting with flavor that it's become one of our favorite recipes to impress guests. 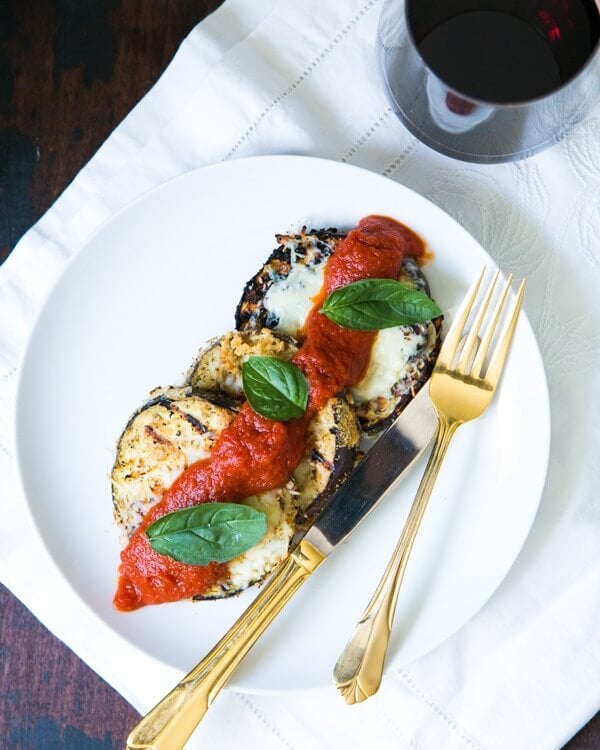 How about one more grilled eggplant recipe? Ever tried eggplant Parmesan...on the grill? Yes, grilling up the eggplant until it's tender, charred and smoky makes for the very best version of this Italian standard. It’s stunning enough to serve for entertaining, but a crowd pleaser that would work for a family dinner. Serve it with a glass of frose and a salad. 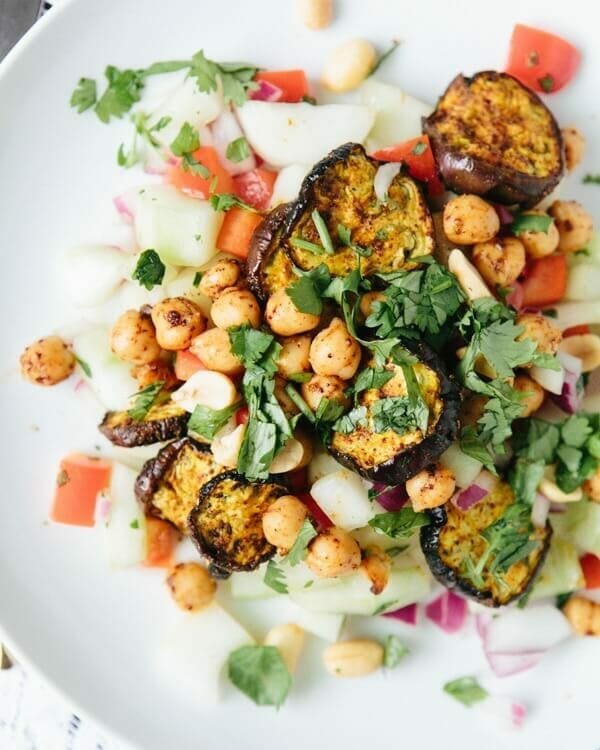 Another easy way to cook eggplant: roasted in the oven! Here you'll roast eggplant for about 20 minutes in a 400 degree oven until it's tender. Then make it into a healthy salad recipe by mixing it with veggies and chickpeas to load it up with plant-based protein. It's full of flavor, featuring cucumber, bell pepper, cilantro and peanuts. 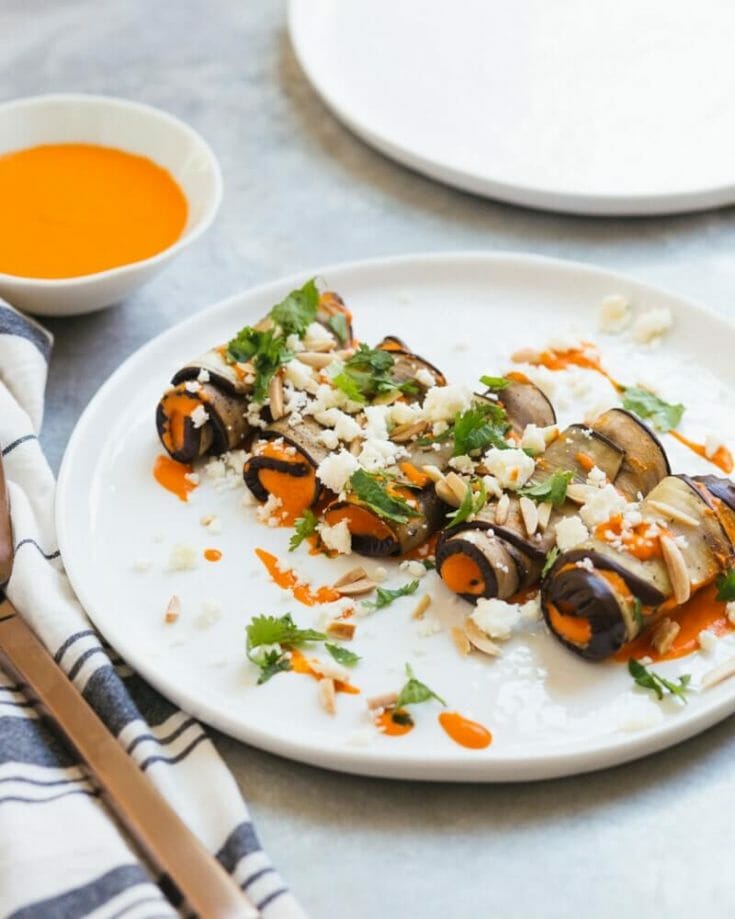 Here's a fun eggplant recipe where the eggplant is roasted in the oven in thin strips to make involtini! It's the Italian word for "small bundles" and here it refers to the eggplant being rolled into tubes. It's then covered in a zesty red Spanish mojo sauce. It’s an olive-oil based sauce made with almonds, garlic and red peppers, and you'll want to drown yourself in it! It's also great for dipping fries. 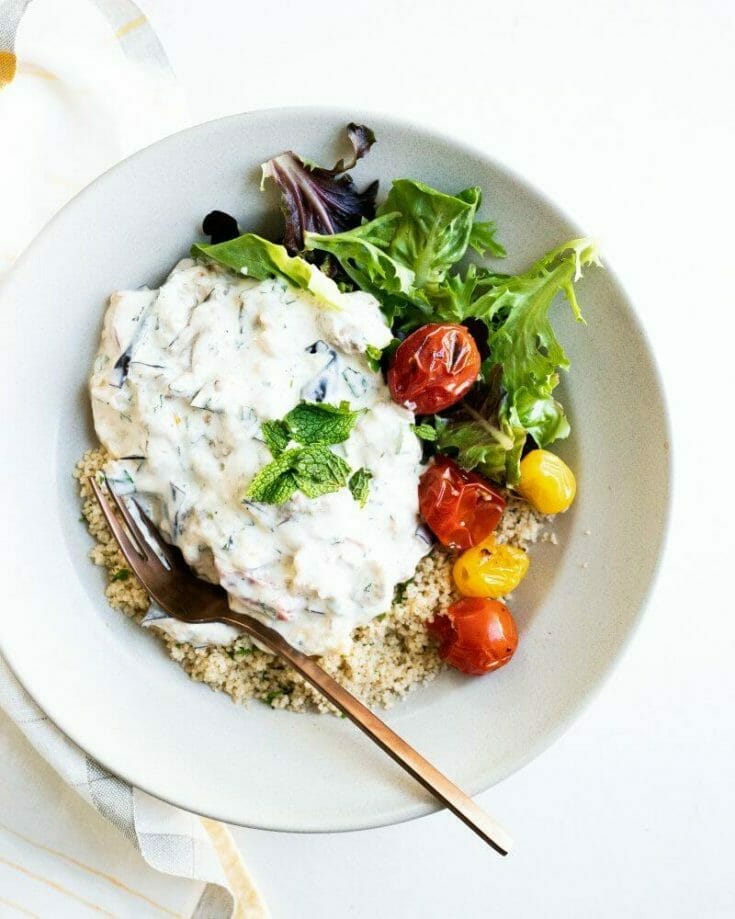 Last but not least in our eggplant recipes: grilled eggplant salad! This Mediterranean eggplant recipe is simple: grilled eggplant and tomatoes with a yogurt mint sauce. But it’s one of those recipes where the sum of its parts is greater than the whole. Serve it as a side dish alongside burgers or chicken; it’s simple to throw the eggplant and tomatoes onto the already hot grill. Or serve it as a vegetarian main dish, over couscous and some flatbread on the side, or in a pita.

How to cut eggplant

What’s the best way to cut eggplant? It depends on the recipe, but this vegetable is pretty easy to cut. In most recipes you’ll either slice it into rings, or dice it. Here’s the basic method for how to cut eggplant (and see below for a video!):

Do you really need to salt and drain eggplant?

If you’ve cooked eggplant recipes before, a recipe may have called to let the eggplant drain with salt on it for 1 hour to extract some of the bitterness from the eggplant. Is this extra step really necessary? According to Epicurious, it’s actually not! This used to be conventional practice with eggplants in the past because they were more bitter. Today’s eggplants are bred to be less bitter, so there’s no need to waste an hour salting the eggplant. Now you know!

What are Asian eggplant or Japanese eggplant?

Asian or Japanese eggplant is a variety of eggplant that is long and thin, instead of globe shaped like the eggplant used in Italian and Mediterranean style recipes. The skin is thin and it has a lightly sweet flavor. It’s harder to find at grocery stores, so look for Japanese eggplant at farmers markets or specialty stores. All of the recipes above except for the eggplant salad call for globe eggplant, but you can typically substitute Asian eggplant. Be aware that it is much smaller than a globe eggplant, so you’d have to use 2 or 3 to equal the same weight as 1 globe.

This baked Eggplant Parmesan recipe is classic Italian comfort food at its finest! This hearty dinner will be come a go-to.

*You’ll have about ⅓ cup flour left over and about 1 egg, but it’s easier for the breading. There also may be some panko left over. These items are not included in the nutritional info.