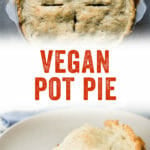 This vegan pot pie is next level: hearty vegetables, a gooey sauce, and a flaky, sage crust. Better yet, it’s easy enough to make on a weeknight!

“That was the best thing ever! Definitely making it again!” When someone says that about your pot pie recipe, you know you’re onto something! Yes, this is the very best vegan pot pie you’ll find. The crust is impossibly flaky, scented with sage. The filling is just the right amount of gooey, with earthy potatoes and onions, fried shallots and white beans. It has so much flavor, well: we can’t even explain it to you. You’re going to have to make this one for yourself. Ready to get cooking?

The inspiration behind this vegan pot pie

Last week, Alex said he’d make dinner for me. That evening, he made up this vegan pot pie (or vegetarian pot pie) from scratch based on just an idea in his head. Knowing what I know about risk and failure, I assumed it would be a flop. I wanted to keep my expectations low in case we ended up eating peanut butter and jelly sandwiches.

Miraculously, this vegan pot pie was one of the best things I’d ever tasted. The earthy potatoes and onions are slathered in a savory, creamy sauce, along with fried shallots and white beans. And on top, a flaky sage vegan pie crust that you’d never believe has no butter (his secret: coconut oil).

We made it again to make sure it wasn’t a fluke. Again, the pot pie was spot on. Our son Larson was in love it: he ate more than we’d ever seen him eat and slammed the table with his hands in glee. This cozy, delicious vegan pot pie has since become one of our favorite recipes for entertaining! It’s perfect for fall dinner parties, Thanksgiving, or Christmas dinner.

Vegan pot pie crust might sound impossible. After all, isn’t pie crust all about butter? Alex did a trial of a vegan pie crust using coconut oil. And to our surprise it worked! The pot pie crust came out flaky and delicious. And it didn’t even taste strongly of coconut. To this pot pie crust Alex also added dried sage, to bring an unexpected savory element. As with most pie crusts, this vegan pie crust is refrigerated before rolling out to solidify the fat. For this recipe, you can refrigerate the crust while you make the filling.

How to make vegan pot pie

There are lots of ways to make vegan pot pie. Here are the main steps to making this one:

This vegan pot pie recipe is one of our fan favorite recipes. If you’re looking for some more savory pie recipes, here are a few on our website and around the web:

This vegan pot pie recipe is…

Looking for delicious healthy dinner ideas? This cozy vegetarian and vegan pot pie is next level: hearty vegetables, a gooey sauce, and a flaky, sage crust.

Here are a few more of our favorite healthy dinner recipes, which also happen to be vegan: