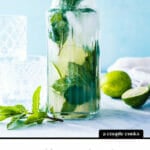 Make drinks for a crowd with this mojito pitcher recipe! This big batch cocktail has the ideal bubbly, minty flavor and festive vibe.

The minty mojito is one of top favorite classic cocktails of all time. But when it comes to entertaining, have you ever tried to shake up more than 2 drinks, one after another? It takes far too long to make them to order. So enter: this mojito pitcher recipe! We created this big batch cocktail for an outdoor dinner party, and it’s infinitely more fun to party with one of these in hand. It’s minty, tangy, bubbly, and gives you that carefree feeling like the last day of school before summer vacation.

What’s in a mojito pitcher?

The Classic Mojito was invented in Havana, Cuba, though the exact origin is unknown. Some say it goes all the way back to the 1500’s with an early combination of lime, sugar and rum. The modern version of it gained steam in the 1930’s, when writer Ernest Hemingway helped to popularize it.

The Mojito made the list of International Bartender Association’s IBA official cocktails, which means it has an official definition. But it’s always defined as a single drink, not a pitcher. The pitcher version uses a homemade mint simple syrup, which is a little different from the standard method. You’ll need the following ingredients:

The standard mojito is made in a cocktail shaker: first you muddle mint, then add simple syrup, lime juice and rum. But for a pitcher version, you don’t want to have to muddle such a large quantity of the herb. That’s where the mint syrup comes in! Make a quick mint simple syrup, and it infuses minty fresh flavor into each drink. It’s similar to this mint simple syrup, but even quicker. Here are the main steps:

Otherwise, this mojito pitcher recipe is beyond simple. Mix the syrup with lime juice and rum, then add ice and garnishes to the pitcher. Serve topped off with soda water! Speaking of…

Speaking of soda water…is it club soda? Is it seltzer? In this mojito pitcher recipe, we use the term “soda water” to mean any type of unflavored sparkling water! Here are some of the differences between club soda vs seltzer:

In contrast, tonic water is carbonated water with added quinine and sugar. Don’t use it in a Mojito because of the distinct flavor. But you can use it for a Gin and Tonic, Vodka Tonic, Tequila Tonic or Whiskey Tonic!

Want a few variations on this Mojito pitcher recipe? Here are a few different Mojito variations to try: you can adapt each of them to work as a pitcher!

When to serve this mojito pitcher recipe

This mojito pitcher recipe is perfect for parties! Try it as a:

Make drinks for a crowd with this mojito pitcher recipe! This big batch cocktail has the ideal bubbly, minty flavor and festive vibe.