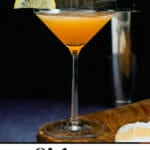 Here’s how to make one of the best classic cocktails of all time: the Sidecar cocktail! This sour is the perfect balance of Cognac, Cointreau and lemon.

Here’s one of the very best sour cocktails, and possibly one of the best classic cocktails of all time. The Sidecar cocktail! What’s so great about the Sidecar? Indeed, we asked ourselves the same question. Then we tasted it. This drink is perfectly balanced between sweet and tart, with just the right edge from the boozy Cognac. It’s a complex, layered drink: warm, crisp, dry, rich, and full at the same time. Truly a stunner, this is now one of our top sour cocktails to make at home (aside from the whiskey sour and New York sour, of course).

Don’t have Cognac? Try the Vodka Sidecar or Bourbon Sidecar instead!

What’s in a Sidecar cocktail?

The most common story about the invention of the Sidecar cocktail is that it was created around 1918, named after an American army captain stationed in Paris in World War I. Apparently he rode around in a motorcycle sidecar, hence the name. The iconic Harry’s New York Bar in Paris likes to take credit for the drink; it also claims classics like the Between the Sheets and the White Lady. The Sidecar is on the list of International Bartender Association’s IBA official cocktails. This means that there’s an “official” definition of the ingredients in a Sidecar:

How to make a Sidecar cocktail (3 steps!)

A Sidecar is very easy to make! The steps are the same as a Classic Margarita, except you’ll use sugar for the rim instead of salt. They’re actually cousin drinks, which might be why we love the Sidecar so much! Here are the basic steps (or go to the recipe)

Get that perfect sugar rim!

The sugar rim is not part of the “official” definition of a Sidecar cocktail, but it’s often traditionally served with it. A sugar rim helps to offset the tart in sour cocktails (like the Lemon Drop Martini). Here’s what to know about making a sugar rim:

Cognac is a type of French brandy, a liquor made from distilling wine. There are several grades of Cognac that designate how long it’s been aged:

Watch out, bottles of XO can be upwards of $200! No need to go that high-end, of course. You can use a mid-priced VS or VSOP Cognac for this Sidecar cocktail. Want more Cognac cocktails or brandy drinks? Try the Between the Sheets, Stinger, French Connection, or Sazerac.

Triple Sec is often used in a Sidecar, but our favorite orange liqueur to use is Cointreau. Cointreau has a orange perfume flavor that’s well balanced between bitter and sweet, while Triple Sec can have a more harsh flavor. If you’re not sure whether you want to buy a bottle, there’s a long list of Cointreau drinks that use it: all of our best Margarita Recipes, Cosmopolitan, Mimosa, and more.

Fun fact: “triple sec” means triple distilled: it’s actually not a brand name! Cointreau is a brand made by Remy Martin, but it’s technically also a triple sec because it’s triple distilled. (How’s that for confusing!)

Cocktails related to the Sidecar…more than you think!

The Sidecar is a classic sour cocktail: citrus juice, liquor and sweetener (which in this case is the Cointreau orange liqueur). You can also make it as a Vodka Sidecar, Bourbon Sidecar or Between the Sheets (bourbon and rum). And it has even more cousin drinks! Here are some more sour cocktails that are related to the Sidecar:

When to serve a Sidecar cocktail

The Sidecar cocktail is a classy classic sour that’s delicious as it is versatile. It’s perfect for sipping as a:

Here’s how to make one of the best classic cocktails of all time: the Sidecar cocktail! This sour is the perfect balance of Cognac, Cointreau and lemon.

*Superfine sugar works well for a sugar rim since it sticks to the glass better than granulated sugar. You can use granulated sugar if it’s all you have; note it can tend to fall off into the drink, making it taste a shade sweeter.

Here are some of our favorite great cocktail recipes and cocktail collections: