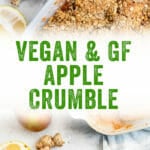 This cozy vegan apple crumble is also gluten free and tastes simply incredible. This recipe is big enough for a crowd and pleases all eaters!

Baking for a vegan and gluten free crowd might sound hard. But hey: apple crumble to the rescue! Fruit crumbles and crisps are easy to make both vegan and gluten free: they don’t need gluten for structure and they don’t need butter for flavor. Basically, they’re the perfect dessert for feeding a crowd of different diets! This is really best apple crumble: cinnamon and fresh ginger make the filling irresistible. And, it makes a big cozy 9 x 13 pan! Alex made up this recipe and it’s become a favorite ever since.

This recipe is our family’s favorite apple crumble! Sometimes we make it with butter and all purpose flour, other times we use this plant based dessert version! Either way, it makes one seriously delicious huge pan of crumble. Our favorite part is the sweet tart apple filling: using fresh ginger makes for a total wow factor.

There are a few simple tricks for making a gluten free and vegan apple crumble:

What are the best apples to use in a vegan and gluten free apple crumble or apple crisp? Baking apples are crisp apples that hold their shape when baked: Alex and I prefer apples that are on the tart side, so we recommend a crisp sweet tart apple. Here are some of the apple varieties that make for the best apple crumble:

How to top vegan apple crumble

Of course, the classic topping for apple crumble is a dollop of vanilla ice cream or whipped cream? But what do you do for a vegan, plant based or dairy free diet when it comes to toppings? Here are a few suggestions:

This apple crumble recipe is…

This cozy vegan apple crumble is also gluten free and tastes simply incredible. This recipe is big enough for a crowd and pleases all eaters!