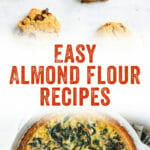 Almond flour is the perfect healthy flour to use in gluten-free baking! Here are the best almond flour recipes, from cookies to waffles.

Almond flour has become a popular healthy flour to use in gluten free baking! What is it? Almond flour is essentially finely ground almonds. It makes a delightfully chewy chocolate chip cookie and a crispy, crunchy quiche crust. While it can’t be swapped for all-purpose flour as a one-for-one substitute, combined with other ingredients it makes for a lovely texture that’s nutrient dense and protein packed. Alex and I love making almond flour recipes: here we’ve rounded up our favorites and a little more about this tasty flour!

Good question! Both are made from ground almonds. Almond flour is made from blanched almonds (almonds with their skins removed) and is ground very finely. Almond meal contains the skins, making it brown in color instead of off-white, and has a coarser grind than almond flour. (Read more here: Almond Meal vs Almond Flour.)

Can you make almond flour at home?

You can! However, unlike oat flour which is very easy to make at home, almond flour is harder because you need blanched almonds and you need to get the almonds to a very fine texture. Therefore, we tend to buy almond flour at the store; these days it’s available at most grocery stores. Head here if you’d like to try making homemade almond flour.

But let’s get to the recipes already! 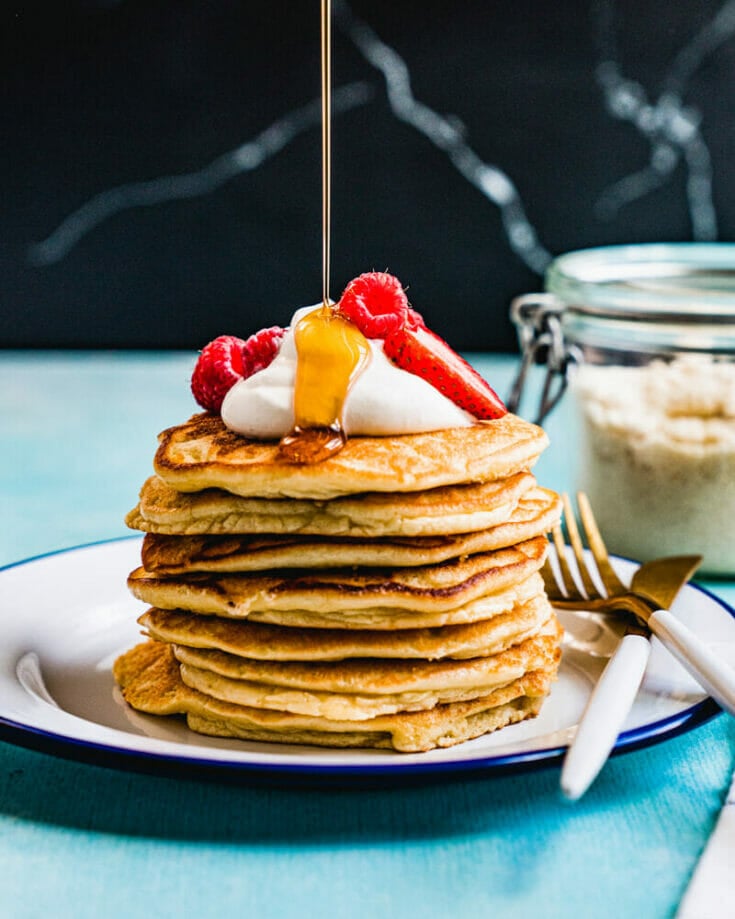 Here’s an almond flour recipe we made for guests that everyone couldn’t stop talking about: Almond Flour Pancakes. “They’re so light and fluffy! They taste like cake! You’d never know they’re made of almonds!” was the chorus echoed as we devoured this stack of flapjacks. They’re fluffy and vanilla scented, so tasty that no one would guess there’s none of the standard all purpose flour.

First up in our almond flour recipes: chocolate chip cookies! The almond flour makes them deliciously chewy and naturally gluten free! They're also vegan, by way of coconut oil and almond butter instead of butter. And a flax egg holds the dough together. What results are vegan chocolate chip cookies that are super chewy, salty sweet, and perfectly delicious. They’re a bit on the smaller side, which is perfect since small-ish sweet treats keep the serving size moderate. 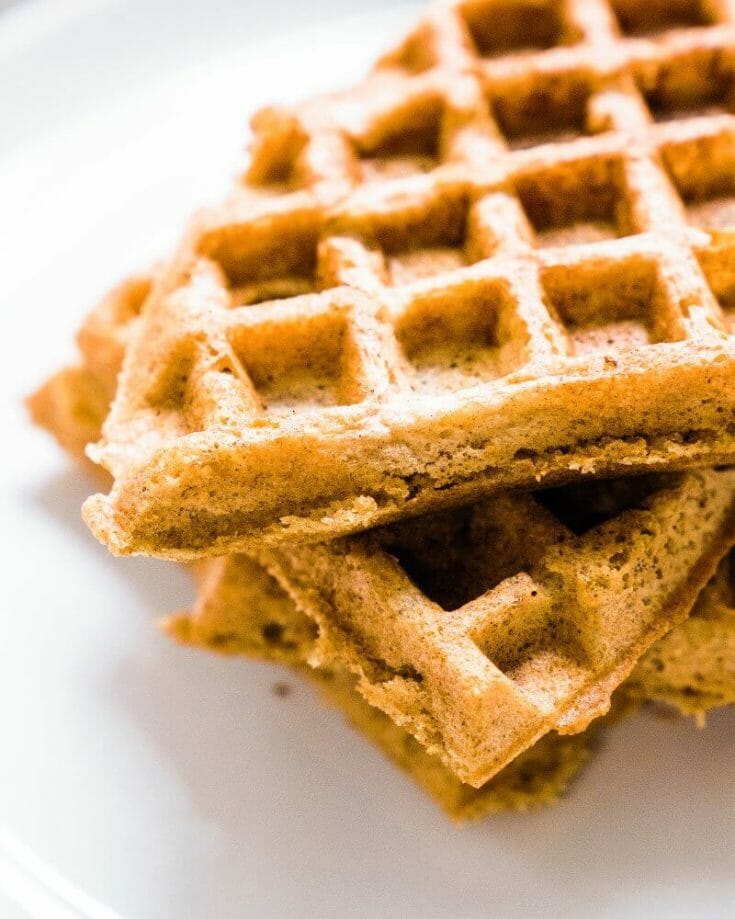 These fluffy gluten free waffles are magic. They are all things a waffle should be: lightly sweet, tender and fluffy on the inside, and crispy on the outside. But instead of refined flour and sugar, this waffles recipe has a simple, whole food base of almond flour! Almond flour is typically very dense: but the magic here is whipping egg whites into a frothy foam that’s folded into the batter. What results is a lightly fluffy dream, not what you would expect of almond flour at all! 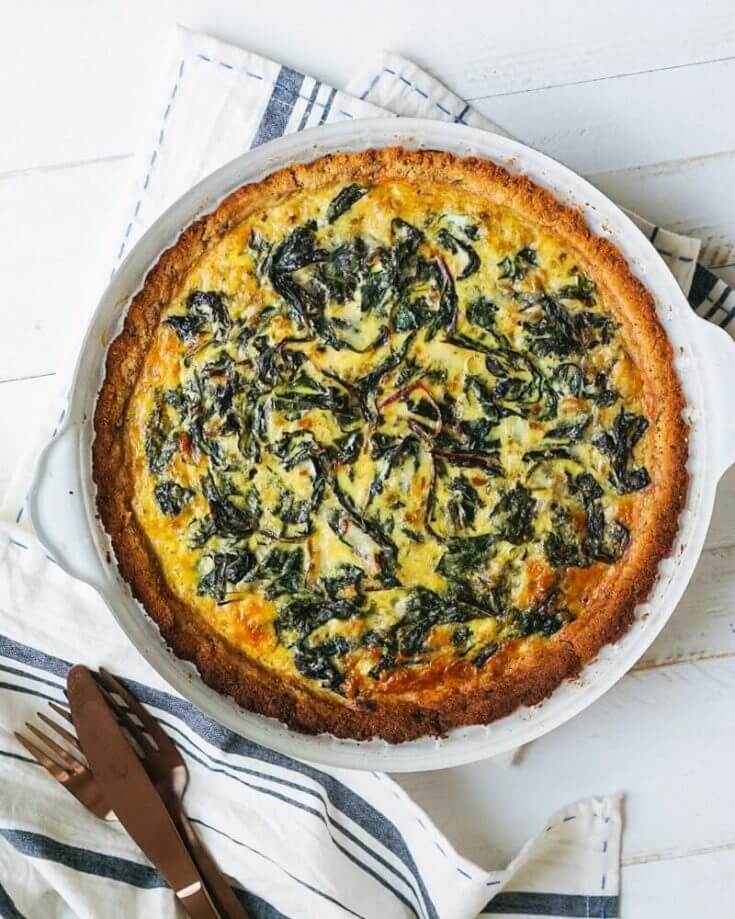 Did you know you can use almond flour in a quiche or pie crust? This vegetarian spinach quiche has a gluten free quiche crust made of olive oil and almond flour. It's delightfully crunchy: an improvement on the traditional pastry crust, we'd say! It's filled with a hearty spinach and Gruyere cheese filling, that's got shallots and a splash of white wine for sophistication. It’s a total crowd pleaser and you can serve it either warm or room temperature. 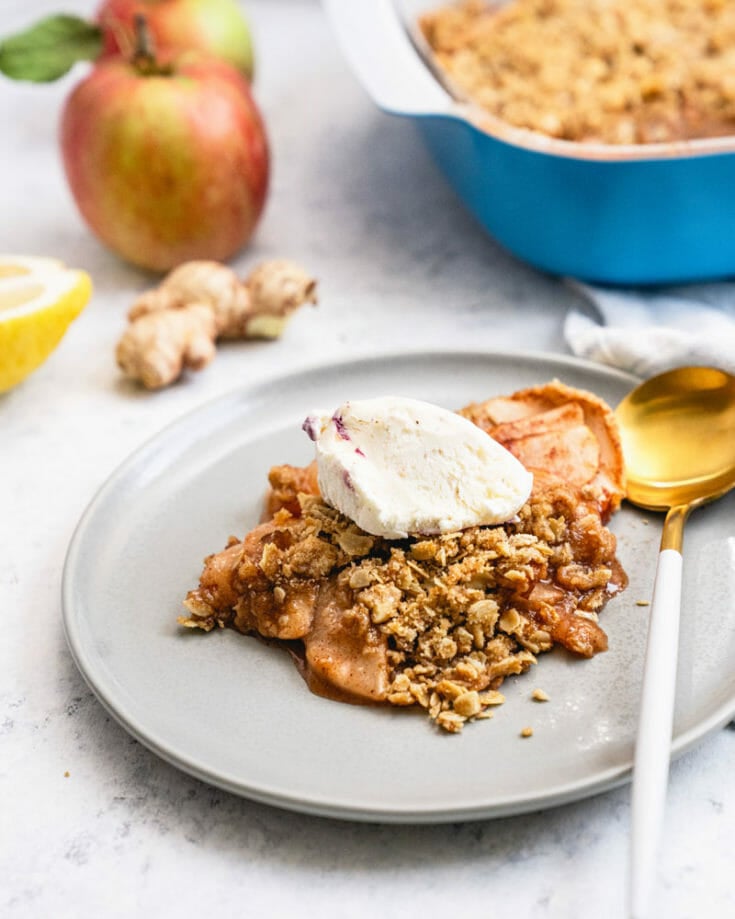 This almond flour recipe takes cozy apple crumble and makes it gluten free! The crumble topping is just as good (better, maybe?) with almonds standing in for flour. This is the best classic apple crumble: it's a big 9 x 13 pan to feed a crowd, and fresh ginger accentuates the gooey filling perfectly. 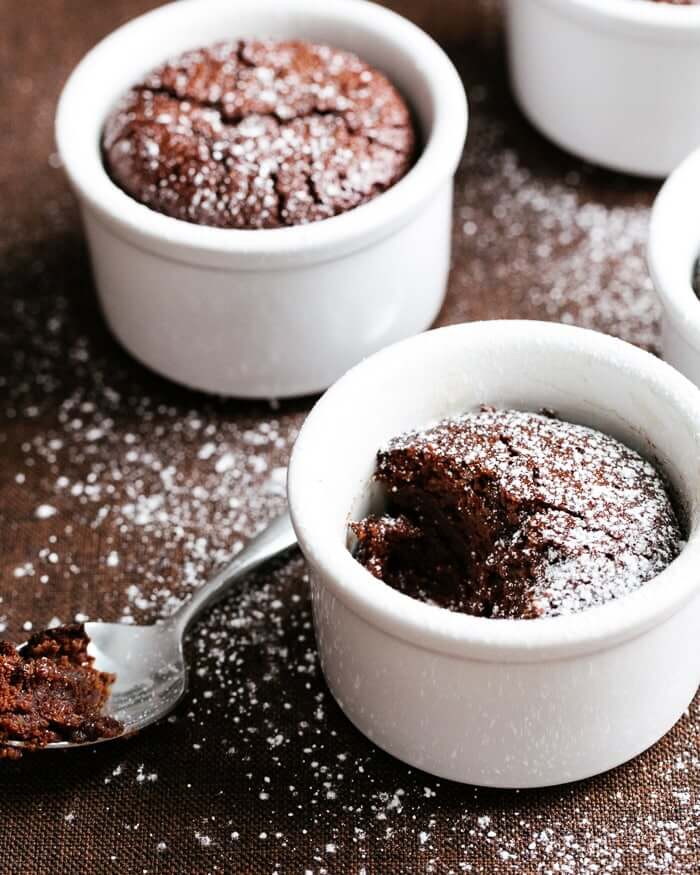 Here’s a chocolate cake that's made naturally gluten-free using almond flour! It’s rich, chocolatey and delicious: but made with almond flour and maple syrup. Oh and chocolate, of course! Here you can use either purchased almond flour or grind your own "almond meal" using a food processor. The decadent cakes are served in little ramekins for individual portions. 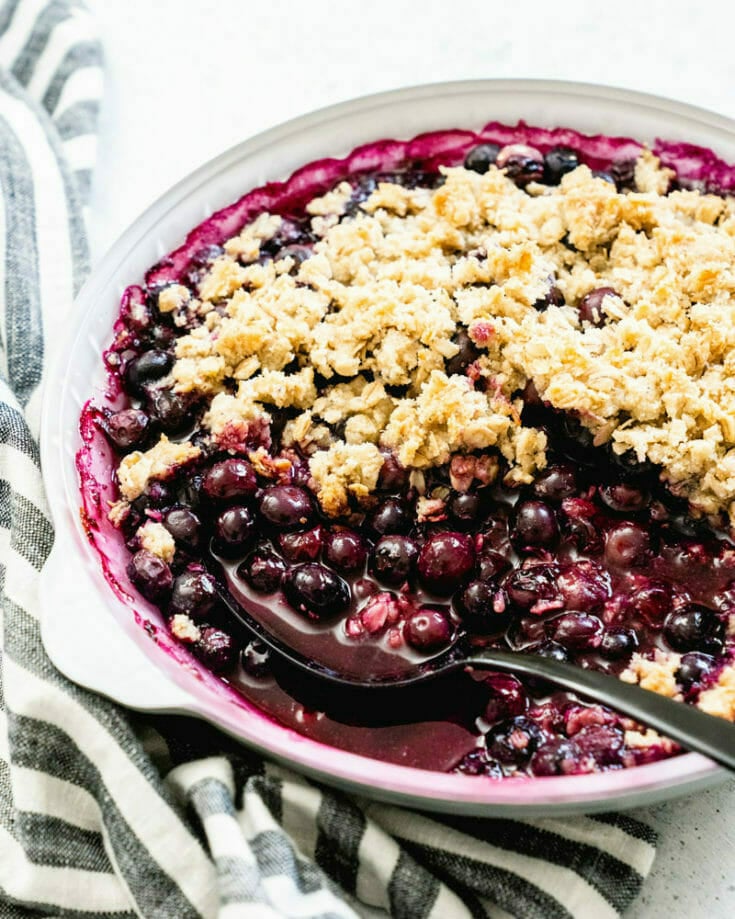 Crisp is an age old tradition, but this one has a modern spin. The blueberry filling is flavored with vanilla and lemon juice. Then the crisp topping combines almond flour, butter, oats and sugar into the perfect crumbly texture. While the blueberry filling has no sugar, somehow the crumble topping gives just the right amount of sweetness to the tangy berries. It's perfect served with homemade whipped cream or yogurt whipped cream. 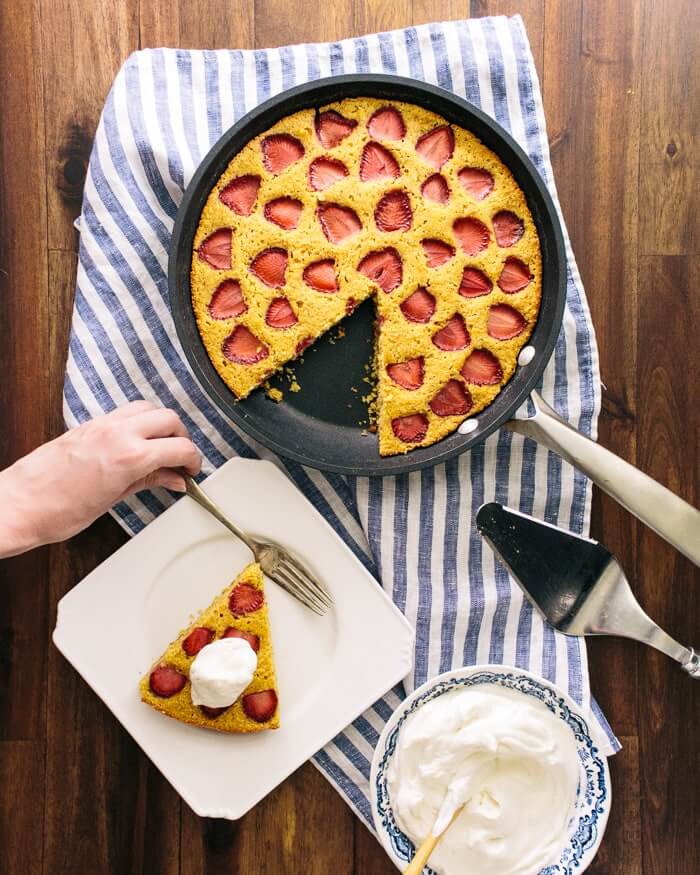 This strawberry cornbread cake uses almond flour along with oat flour to make a terrifically tasty breakfast or brunch recipe! Or, top it with whipped cream and serve it as a dessert. Sweetened with maple and naturally gluten free, it’s moist and hearty. The cake is perfectly moist and topped with strawberries, with fresh orange juice to give it a zing. 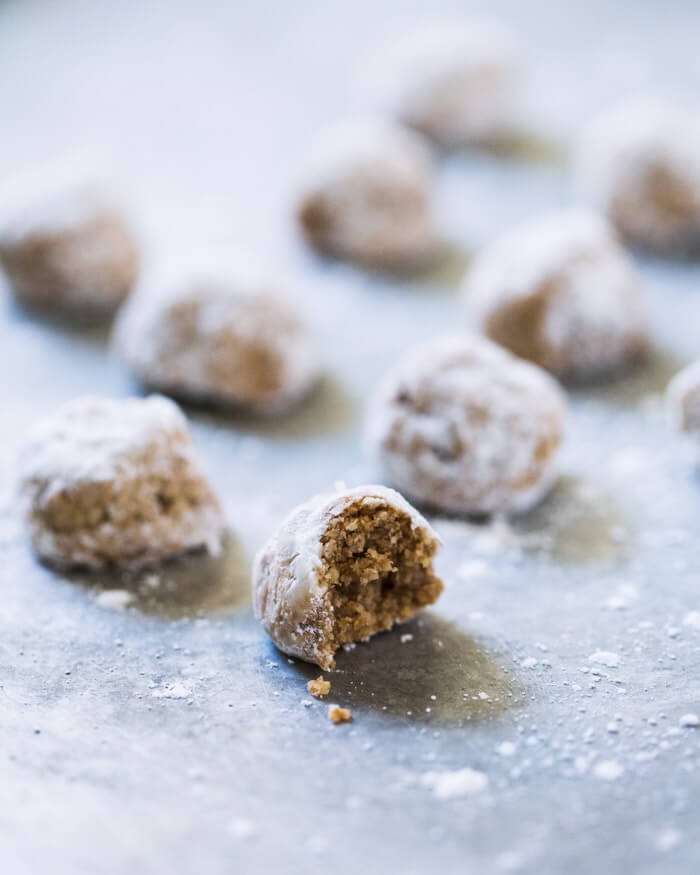 These Russian tea cakes have a twist: they're an almond flour recipe with cozy chai spices! The cardamom is the star of the show here; it’s what gives chai spice its familiar zing. Even though they’re made entirely of almond flour, these cookies are light and crumbly. Covered in a light dusting of powdered sugar, they're magical. 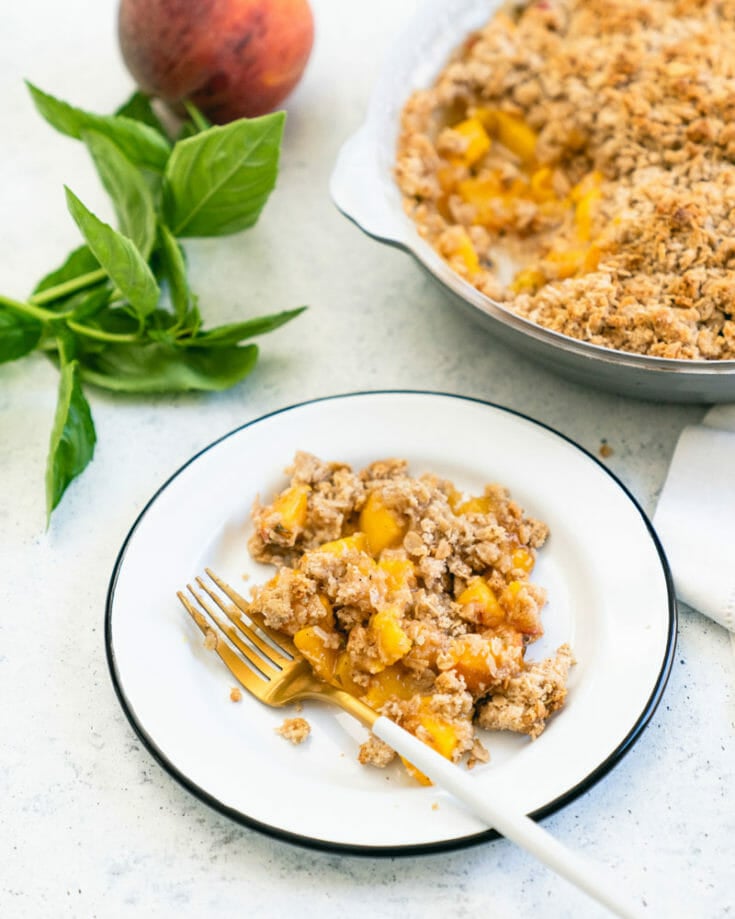 This peach crisp so satisfying and uses the almond flour trick for the topping! The filling perfectly highlights ripe peaches, scented with a hint of peppery basil. And the topping is delightfully crunchy, featuring oats and almond flour. It can also be easily made vegan, plant based or dairy free by using coconut oil instead of butter. Either way, it's a huge crowd pleaser. 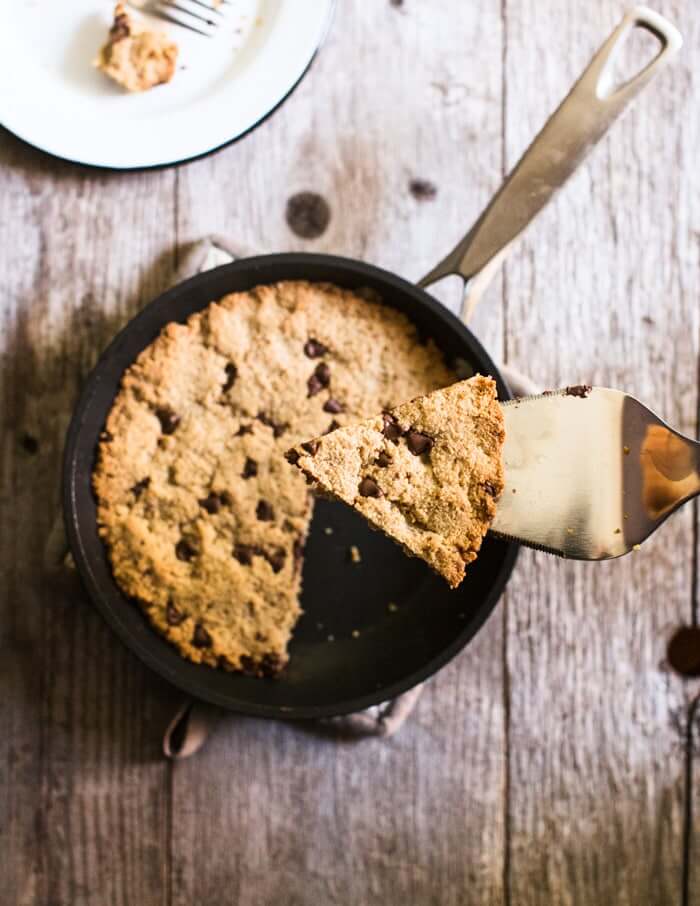 Last but certainly not least in our almond flour recipes: our famous chocolate chip skillet cookie! This one has been made and loved by many. The trick is (surprise!) almond flour, which makes the cookie turn out chewy and caramely, almost like a blondie. Since the dough base is primarily almonds, it’s got more nutrients than the typical refined white flour cookie. And it's easy to make: mix all ingredients in a bowl, dump it in a skillet, and bake. You can’t get much easier than that!

Try these almond flour pancakes: light, fluffy and so full of flavor they’ll become your go-to recipe. Everyone will ask for seconds!

Make sure to use almond flour in this recipe. Do not use almond meal, which is coarser and made from almonds with skins. Almond flour is ground more finely and is made with blanched almonds, which have no skins.