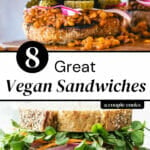 Looking for plant based sandwich recipes? Turns out, sandwiches don’t need meat or cheese to be hearty and satisfying. There are lots of ingredients and techniques to make incredibly delicious sandwiches…no meat required.

Here are all the best vegan sandwiches to try, full of irresistible flavor and healthy ingredients! There’s our fan favorite chickpea salad, like a vegan spin on chicken salad using chickpeas that takes just a few minutes to put together. Try vegan BBQ starring a special ingredient, or the most iconic vegan sandwich of all…the falafel sandwich. 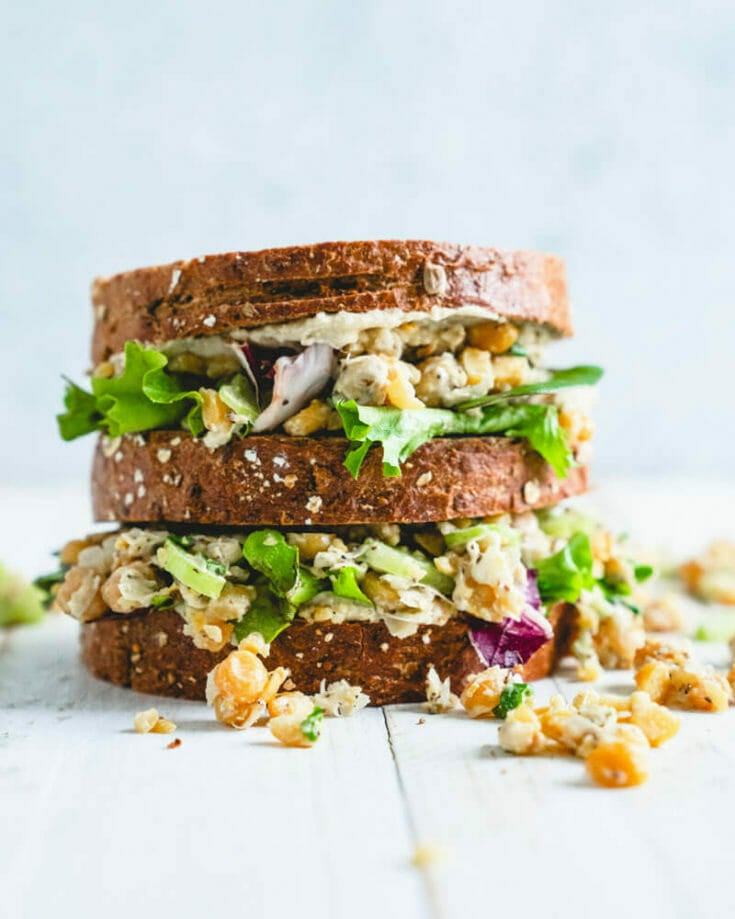 This vegan chickpea salad sandwich is a massive fan favorite! It's so quick, easy and flavorful. Essentially a vegan chicken salad sandwich, it features mashed chickpeas, celery, green onion, a little vegan mayo, and a pop of lemon. Serve it spread with hummus on both sides of the bread for an extra dimension. It’s one of our top vegan sandwiches. 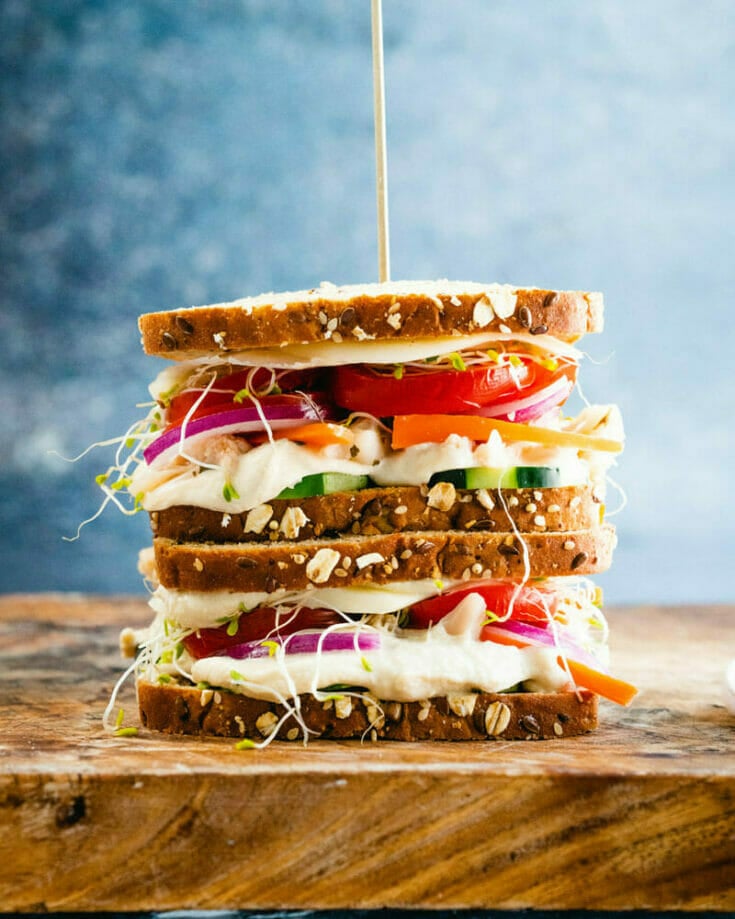 Here’s a genius vegan sandwich idea for busy days or even a lightening fast weeknight dinner. This ultimate hummus sandwich! That’s right: hummus on a sandwich. You don’t have to reserve hummus just for carrots and pita triangles! It works as a sandwich spread that’s full of plant-based protein to keep you full for hours. Throw it on bread with all your favorite crunchy veggies and it’s a lunch or snack that couldn’t be easier to whip up. 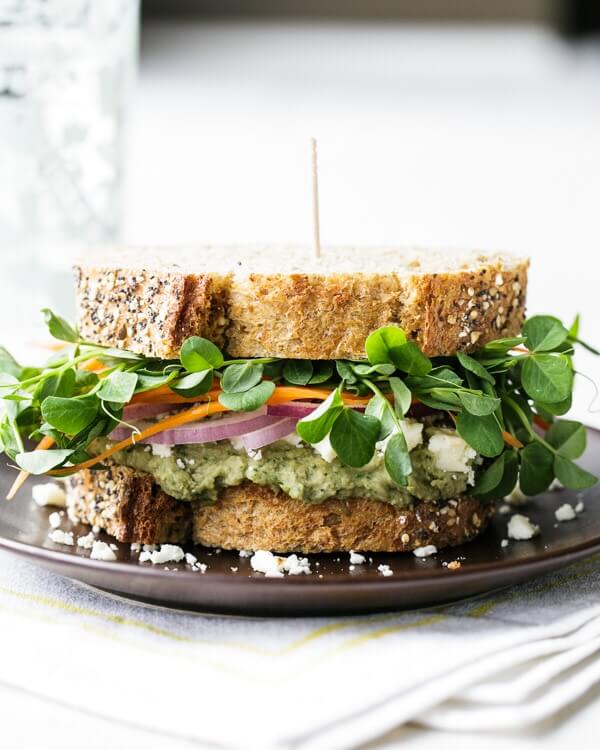 This Mediterranean veggie sandwich features our garlic herb white bean dip with tasty crunchy veggies. For a vegan version, replace the feta cheese with salty Kalamata olives: they work just as well! To top it all off, use sprouts or microgreens for a satisfying crunch. It’s super fast to put together and darn delicious. 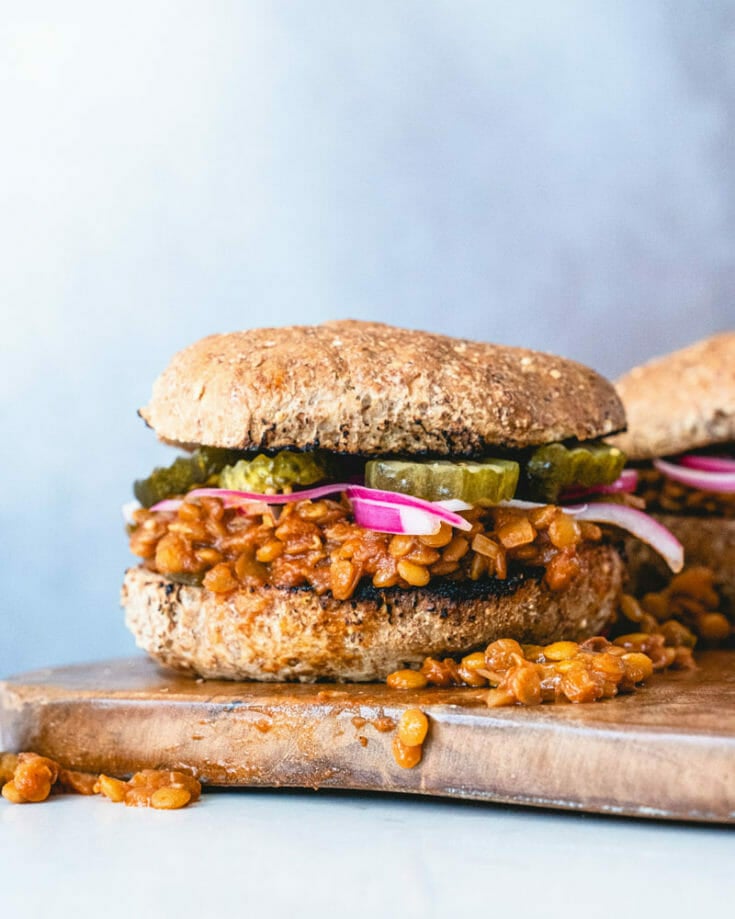 What better vegan sandwich to please a crowd than Sloppy Joes? These vegan Sloppy Joes have a zingy lentil filling that tastes just as good as the meaty version. Put it on a toasted bun with some bread and butter pickles, and WOW! You’re going to love this one (promise). 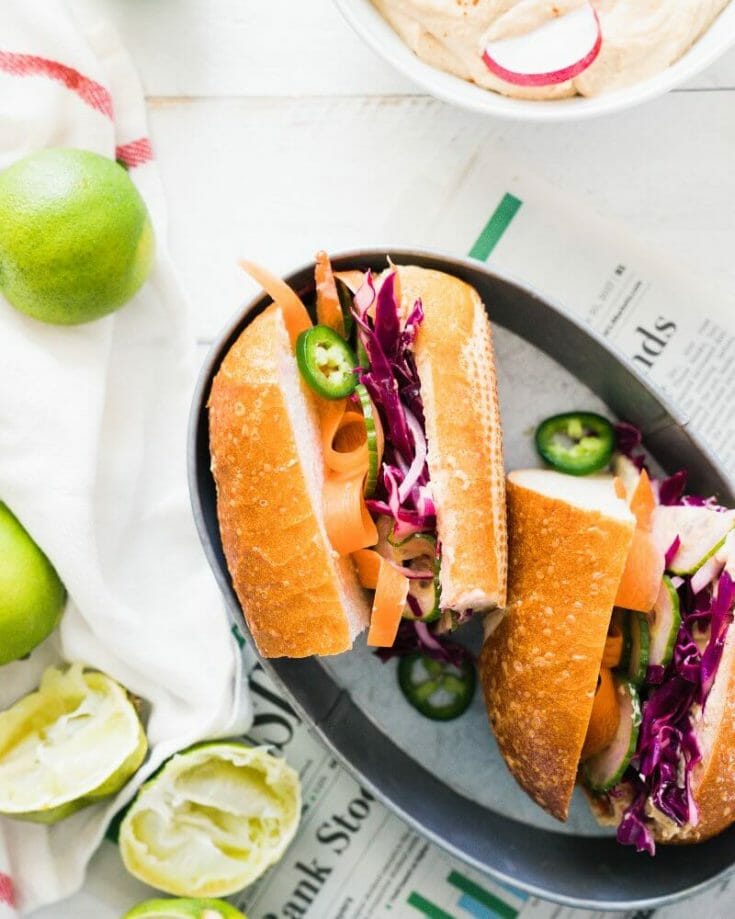 Banh mi is a Vietnamese sandwich served on a baguette, with a usually meat filling and pickled vegetables on top. This is a vegan sandwich spin is filled with ginger lime hummus, quick pickled red onion, cabbage and cucumber, and of course jalapeño peppers and cilantro! In just 20 minutes, you’ve got a vegan sandwich that’s bursting with flavor. 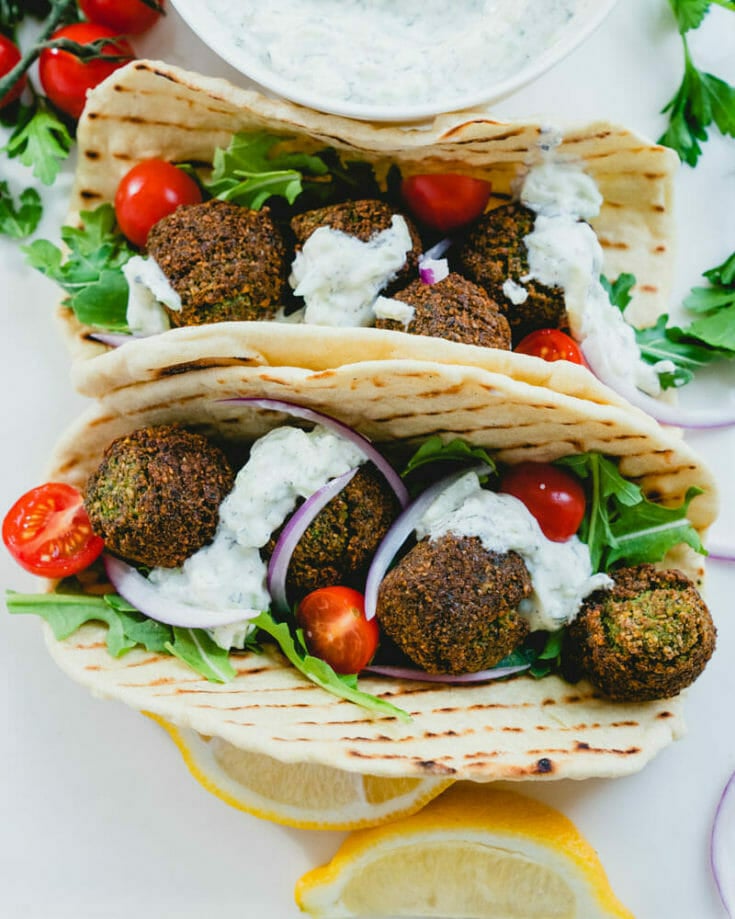 We'd be remiss without mentioning one of the most iconic vegan sandwiches eve: the falafel sandwich! The crunch of the fried chickpea fritters, the soft herby interior, and the sauces that dribble down your chin….it’s truly the ultimate vegan meal. This sandwich features crunchy fritters, ultra soft flatbread, crunchy veggies and creamy, garlicky sauces. For vegan, use Best Tahini Sauce.

Note: It does take some prep time to make the falafel, but you can make them in advance and reheat. Or, make the easier Baked Falafel Burger. 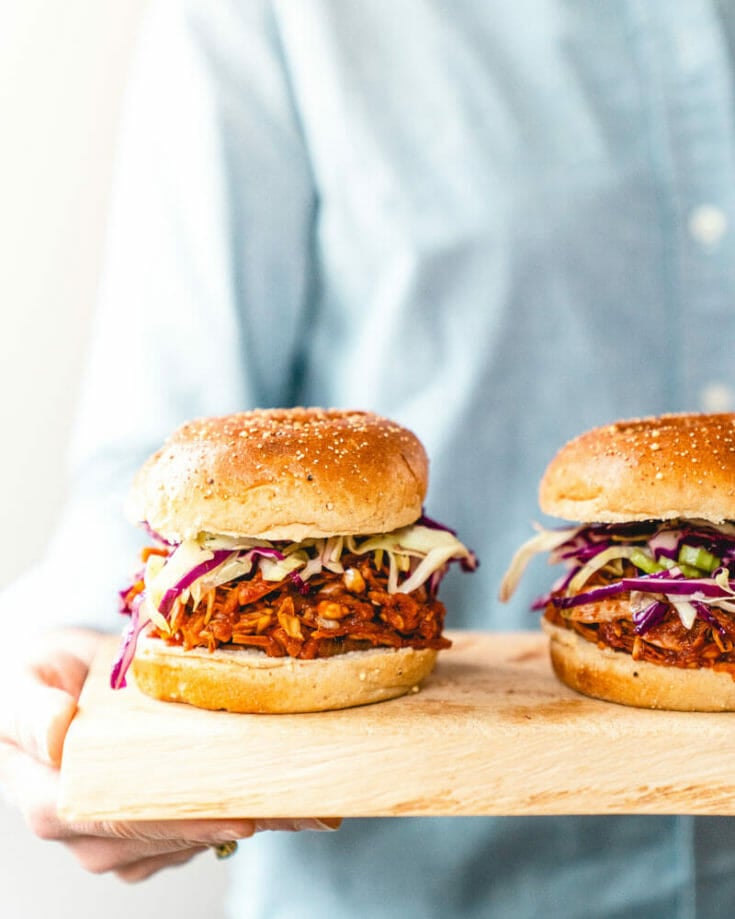 This vegan BBQ sandwich has barbecue sauce that’s perfectly balanced with sweet, tangy, savory, and a little boozy. What's the "meat"? Jackfruit is a tropical fruit that is used as a substitute for pulled pork. Sounds crazy, but it’s absolutely delicious. Place it on a bun with our easy vinegar coleslaw and enjoy: it's one of the most satisfying vegan sandwiches out there. 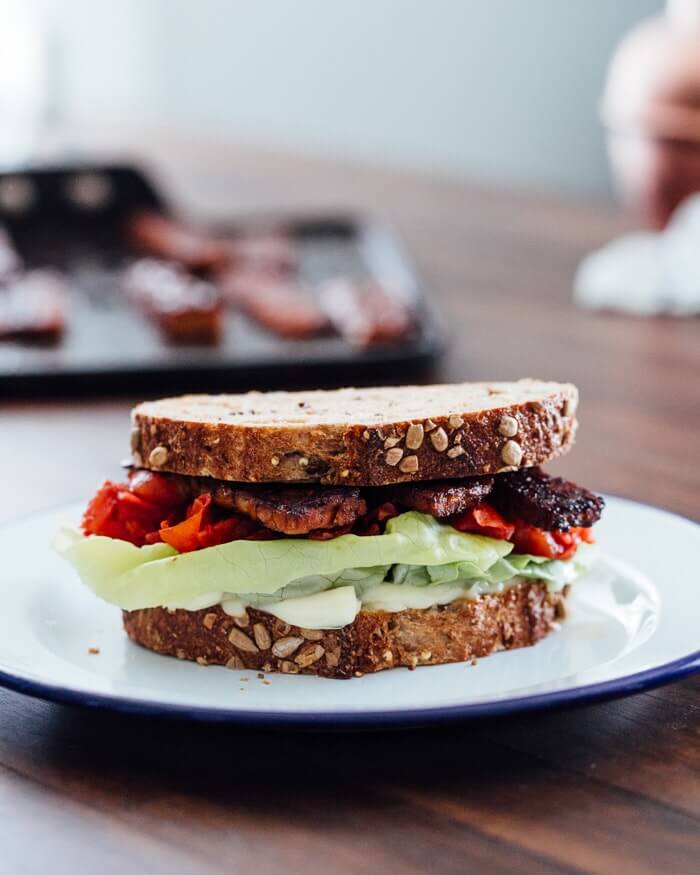 Last up in our vegan sandwiches: the Vegan BLT! Ever have a craving for a really good BLT? The smoky, salty bacon, crisp lettuce, and juicy tomatoes, with the toasted bread slathered in mayo? Make this vegan BLT sandwich, which features smoky tempeh bacon instead of the real stuff. It's just as satisfying!

Eating a mostly vegan or plant-based diet is now easier than ever! There are lots of recipes and resources for making vegetables taste incredible. Here are some great places to start: