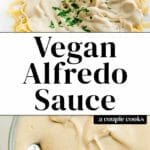 Do you eat whole food plant based (WFPB), but miss the creaminess of alfredo sauce? If so, this recipe is for you! More people than usual have been telling us lately that they’re trying to eat plant based more often. In fact, per the New York Times 40% of Americans want to eat more plant based foods. WOW! Alex and I have been eating mainly plant based for years, and we can confirm: it’s an incredibly delicious and energizing way to eat. This vegan alfredo sauce recipe is the perfect example. It’s creamy and luscious, yet full of nutrient-rich cauliflower and protein-packed cashews. Ready to get cooking?

What’s in this vegan alfredo sauce?

There are lots of ways to make a vegan alfredo sauce. The more you eat vegan recipes, the more tricks you’ll learn! This sauce uses a couple tricks to make a creamy white sauce that tricks your brain into thinking it’s alfredo sauce. Here’s what we’ve got:

Alex and I sent this recipe to some friends and family who are close enough to us that they tell us their true opinion! Here’s what they had to say about this vegan alfredo sauce:

How to make the sauce: simmer then blend!

This vegan alfredo recipe is so easy to make! Here are the basic steps you’ll follow (see below for the entire recipe):

For the blending, you’ll want a good quality blender. If you don’t have one, you may want to invest in one (a friend of mine had one that was so bad, you didn’t even have to put the top on when you blended!). Alex and I have a high speed blender (we use this Vitamix blender), and it makes quick work of this vegan alfredo sauce.

How much does this vegan alfredo sauce make?

This vegan alfredo sauce makes 6 cups total. Alex and I measured, and for our taste we liked using about 5 cups of alfredo sauce for 1 pound of pasta. So, if you make fettuccine alfredo with a pound you’ll have about 1 cup left over. Usually we calculate that 1 pound of pasta is 8 modest servings, so that would be just over ½ cup sauce per serving of pasta. Of course, you can use as much as you’d like on a serving!

Top vegan recipes that are creamy with cashews!

You’ll be amazed at how cashews blend into a rich, creamy body for this vegan alfredo sauce! Unless of course, you already know this trick: it’s pretty widely used in vegan recipes. Alex and I use it often in our plant based recipes here on A Couple Cooks! Here are some of our favorite recipes that also use cashews to make them creamy without the use of dairy:

Cauliflower is one of the 20 best vegetables you can eat! Cauliflower has only 25 calories per cup of florets, making it a low-calorie way to get vitamins and nutrients into your diet. It’s high in vitamin C, potassium and omega 3’s. It’s also is high in fiber (1 cup has about 10% of your daily needs).

Are you searching for the most delicious cauliflower recipes on the internet? You’re in luck: we’ve compiled our Top Cauliflower Recipes that highlight the glamorous vegetable that it is.

This vegan alfredo sauce recipe is…