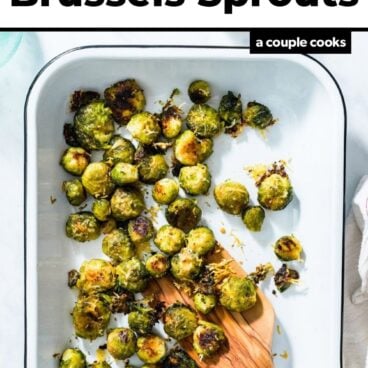 Have you tried smashed Brussels sprouts? This recipe is truly special: they come out crispy on the outside and tender on the inside.

You’ve cooked your Brussels sprouts every which way: roasted, boiled, sauteed, and raw. But have you tried Smashed Brussels Sprouts? If you’re a Brussels lover, this recipe is a must-try. Boil them, smash them, then roast them with Parmesan cheese until they’re crispy at the edges. It’s like roasted Brussels sprouts taken up two notches, because the interior is creamy and smooth. Here’s how to make them!

Smashed Brussels sprouts are boiled then smashed and roasted in the oven until crispy, much like a smashed potato. It makes them extremely tender and smooth on the inside, and crispy on the outside. Parmesan cheese helps to get even more crisp exterior, and makes little roasty bits where it falls onto the baking sheet. We think it’s a must! Here’s what you’ll need for this recipe:

How to make smashed Brussels sprouts: a few tips!

This smashed Brussels sprouts recipe requires two major steps, so you’ll want to save it for when you have a little extra time. If desired, you can do the boiling step in advance, then roast them when you’re ready to serve (more on that below). Because we’re all about simple cooking, we tried to find a way to get around the boiling step: but it’s required so that the sprouts are smashable. Here are a few tips:

A note on the Parmesan cheese

You can make smashed Brussels sprouts without cheese for a dairy-free or vegan spin: they’ll still taste good! But the Parmesan cheese really adds to the crispy texture and savory flavor. If you’re trying to go without, we recommend sprinkling with something savory: nutritional yeast or a vegan Parmesan cheese brand of your choice (or homemade vegan Parmesan).

Also we like shredded Parmesan: the kind that is long shreds! Grated Parmesan is the kind with the powdery texture: it works here, but it doesn’t get as crispy.

These smashed Brussels sprouts are so delicious, and worth every minute of the prep time. But just like smashed potatoes, they’re a little labor intensive. They’re perfect for holidays like Thanksgiving or Christmas, but they take a bit of prep time. Here are a few notes on make ahead info and how to serve them to a crowd: 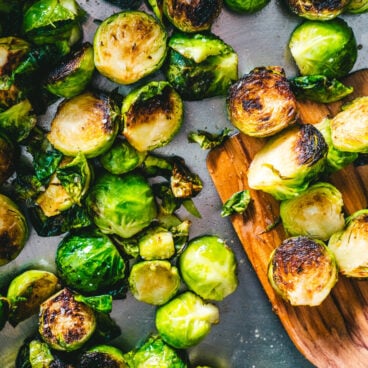 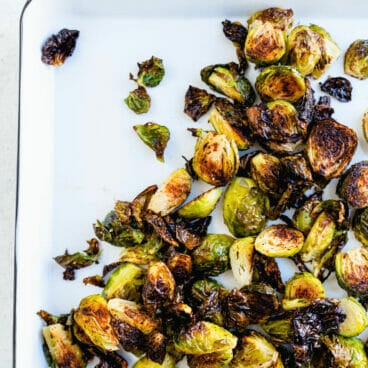 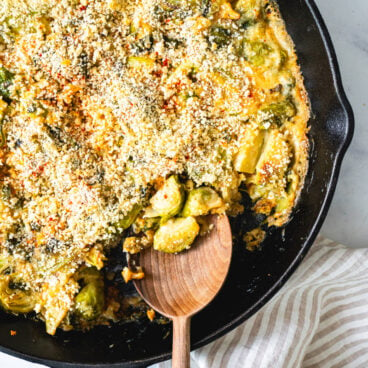 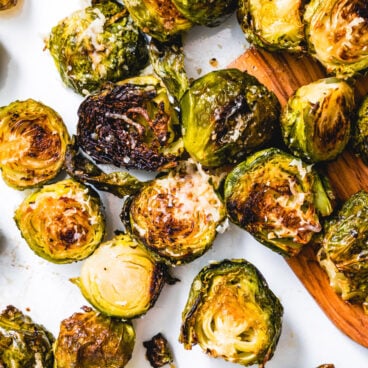 This smashed Brussels sprouts recipe is…

Have you tried smashed Brussels sprouts? This recipe is truly special: they come out crispy on the outside and tender on the inside.

*If you double the recipe for entertaining, keep in mind it will take longer in the oven to get browned and crispy since there’s more surface area and moisture with two trays.

**Make ahead tip: you can boil the Brussels sprouts in advance and refrigerate until roasting. Make sure to pat dry before adding the oil and seasonings in Step 4.