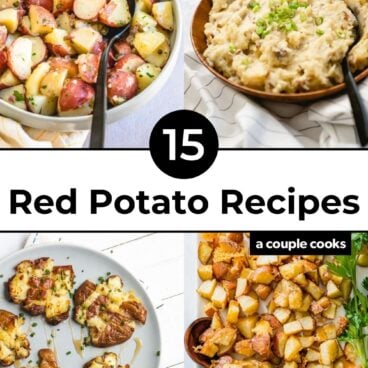 Red potatoes are not only delicious, they’re good for you too! Here are our top red potato recipes for the best ways to eat them.

All hail the potato! Potatoes are super versatile ingredients that have gotten a bad rap for only being served fried. But are potatoes good for you? Turns out they are! Potatoes are an excellent source of vitamin C, a good source of potassium (more than a banana!), and a good source of vitamin B6. They’re also fat free and cholesterol free, and a good source of fiber with the skin. So what are you waiting for? Let’s get eating with some red potato recipes! In all of the recipes below, we’ve kept the red skin on for maximum nutrients. And you won’t believe some of the ways you can eat potatoes (like vegetarian meatballs). 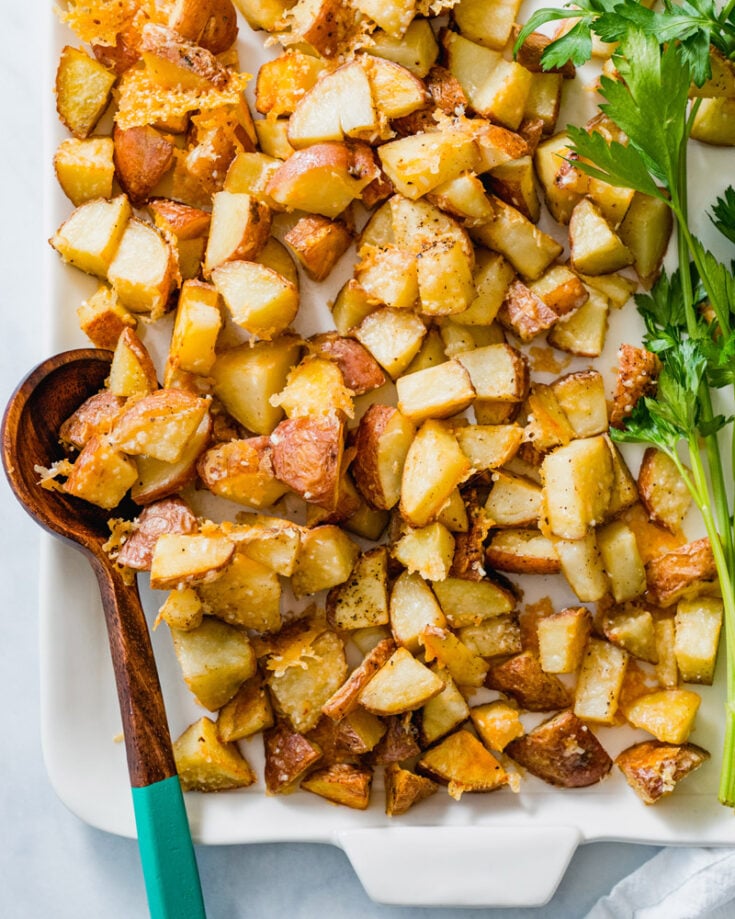 Here’s a simple side dish that’s always satisfying: Roasted Red Potatoes! These spuds come out crispy and savory, seasoned with garlic powder and salt. A bit of Parmesan cheese gives them even crispier roasty bits. Bake up a sheet pan of these little spuds, and each bite is a little bit of heaven! These disappeared in an instant over here. 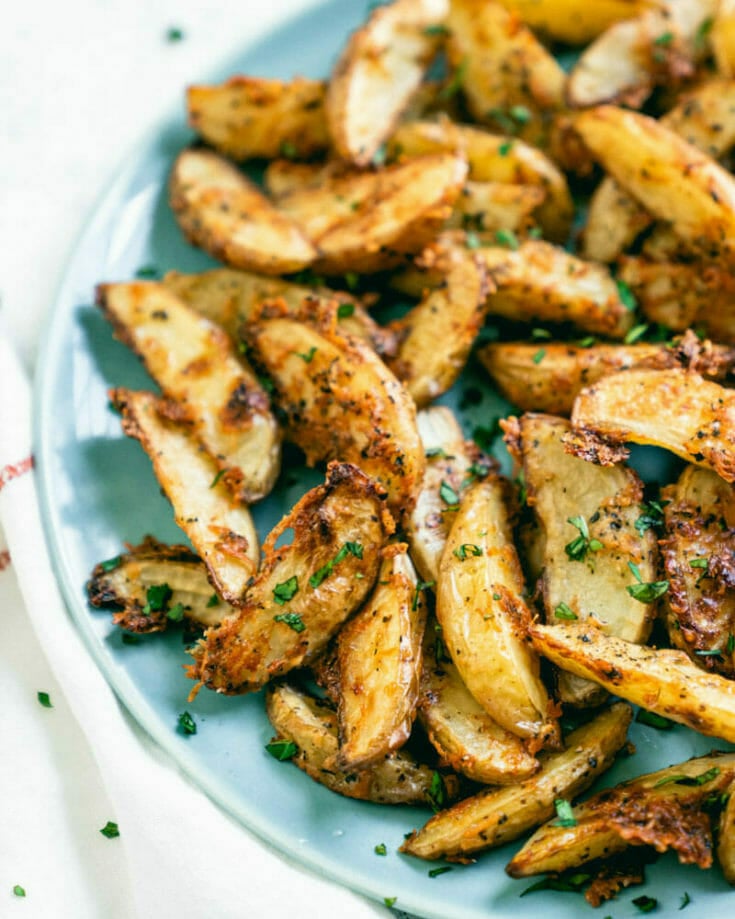 These Parmesan potatoes are truly extraordinary. There’s the crunchy exterior, oven roasted to perfection. Of course the interior is velvety and tender. And you know how Parmesan cheese gets all crunchy and savory when you heat it up? Yeah, those little crunchy bits are all over these potatoes, making them all the more irresistible. 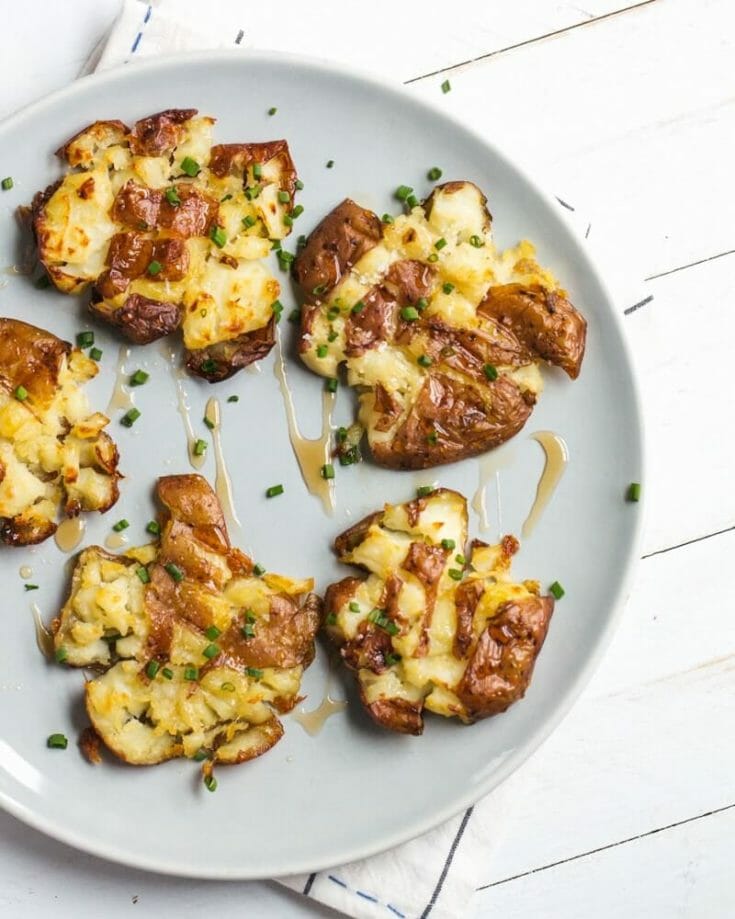 Next up in our red potato recipes: smashed potatoes! A beautiful way to serve red potatoes, first you boil them, then you smash them and bake them until they’re crisp! Here the crunchy, salty roasted smashed potatoes are paired with the fruity, nuanced sweet drizzle of balsamic reduction. Not only are the smashed red potatoes visually stunning, they’re seriously tasty. 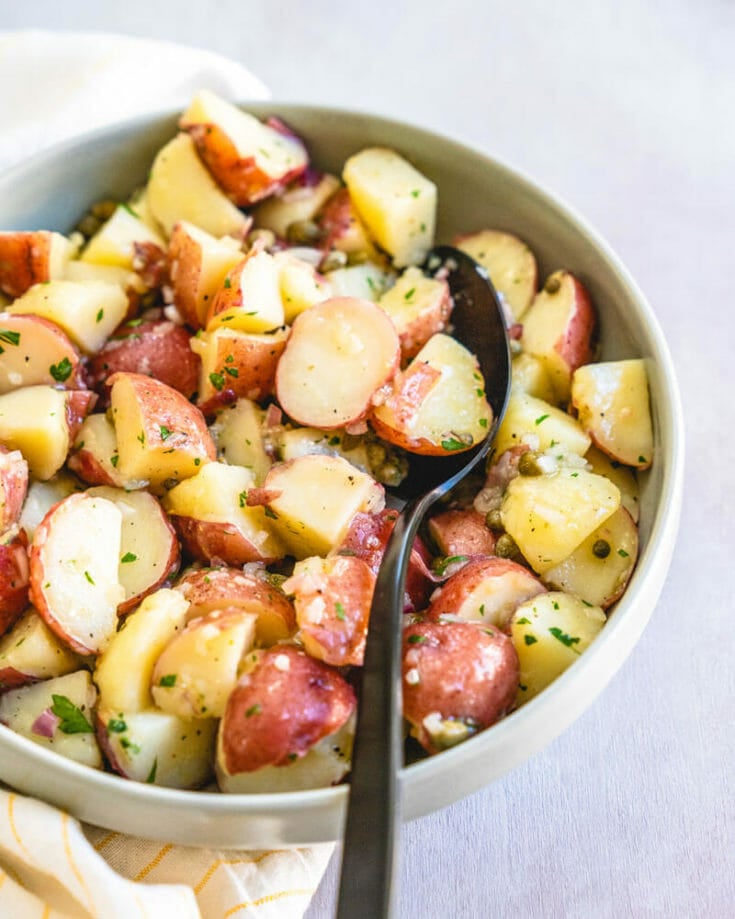 This French red potato salad is incredibly tasty: the sum of its parts equal something much greater than the whole. The red potatoes are salty, tangy, and moist, mixed with just the right amount of salty capers and savory minced shallot. It’s one of those salad recipes where you can’t help but sneak bites while you’re making it: it’s just that good! 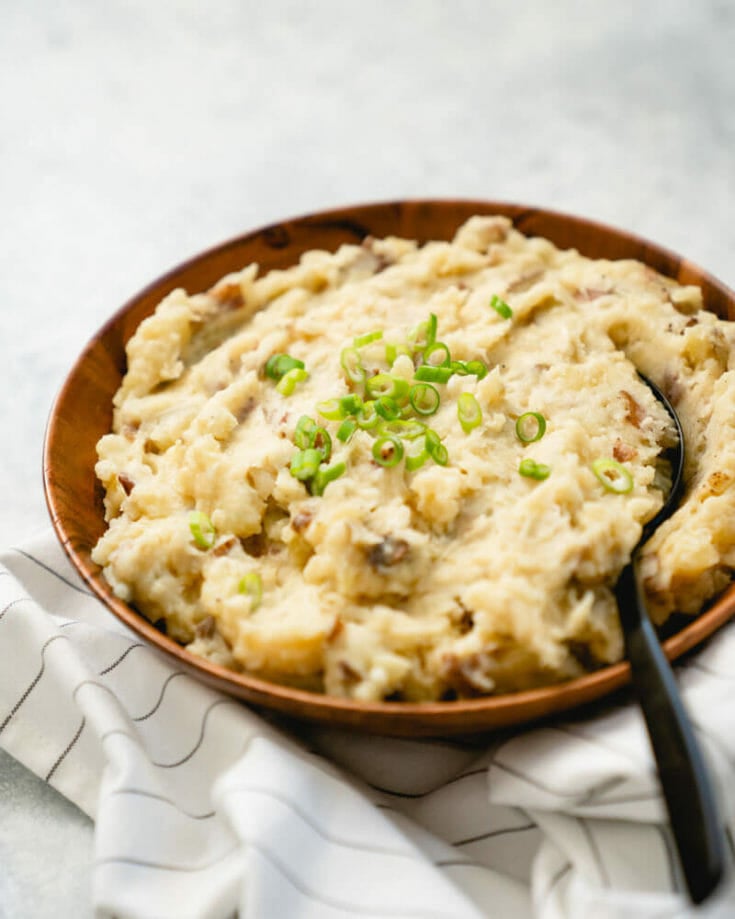 Next up in our red potato recipes, a straightforward take: mashed red potatoes! Instead of watering the potatoes down to a lifeless puree, this mashed red potatoes recipe is flavored to perfection! The potato skins are kept on to add nutrients and texture. It also means you don’t need to waste time peeling them! 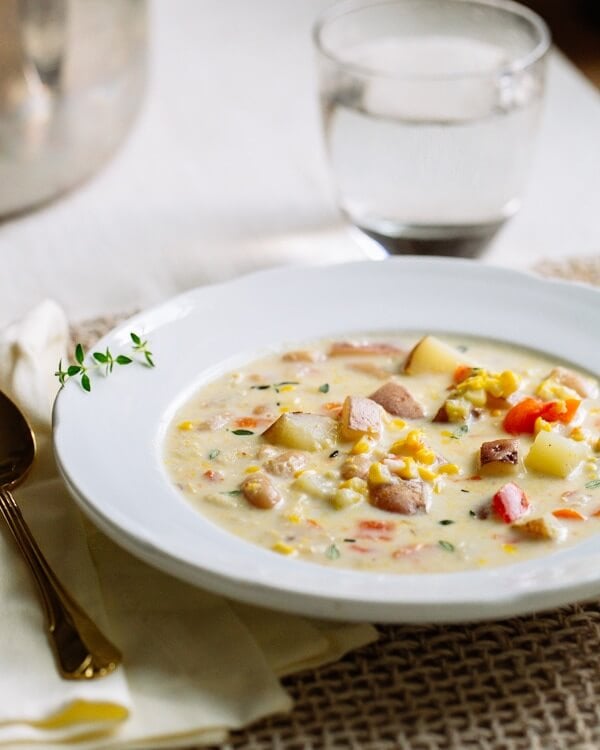 One of our favorite red potato recipes is this delicious potato corn chowder. White beans blend in with the other vegetables, at the same time adding some plant based protein and making the soup more filling. It’s a fantastic potato corn chowder that’s bursting with flavor and not too heavy. 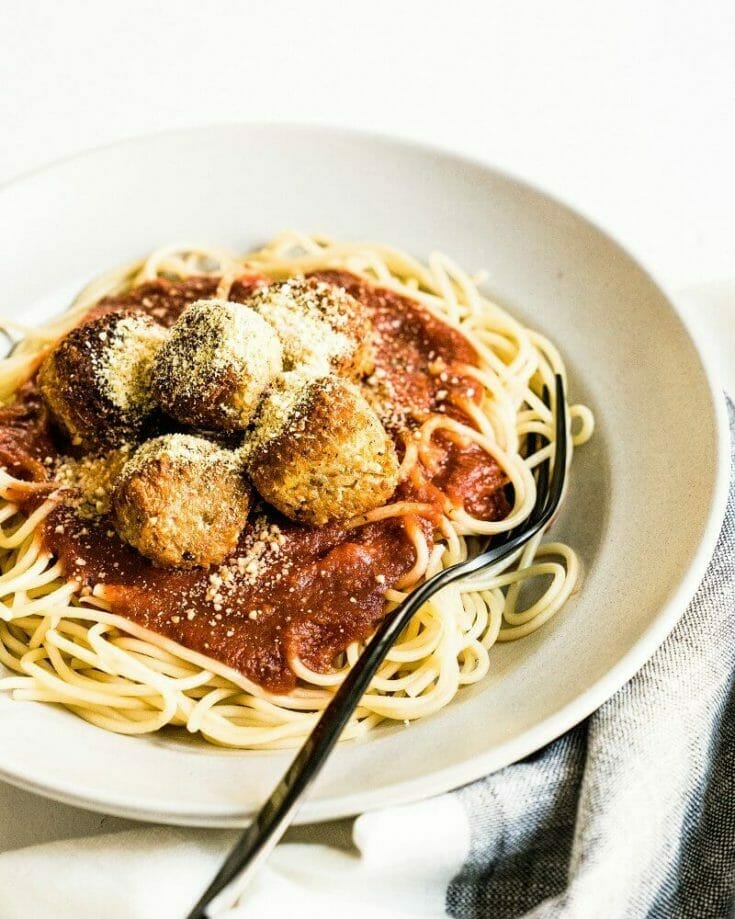 Here’s a recipe you’d never know is one of our red potato recipes: meatballs! Vegan meatballs, to be exact. The ingredients for the vegan meatballs are simple: just oats, red potatoes, cashews, garlic and spices! They’re best when pan fried in a bit of oil, but we’ve added a baked option below as well. High-quality marinara sauce is key here: it brings in the flavorful, savory component even more. 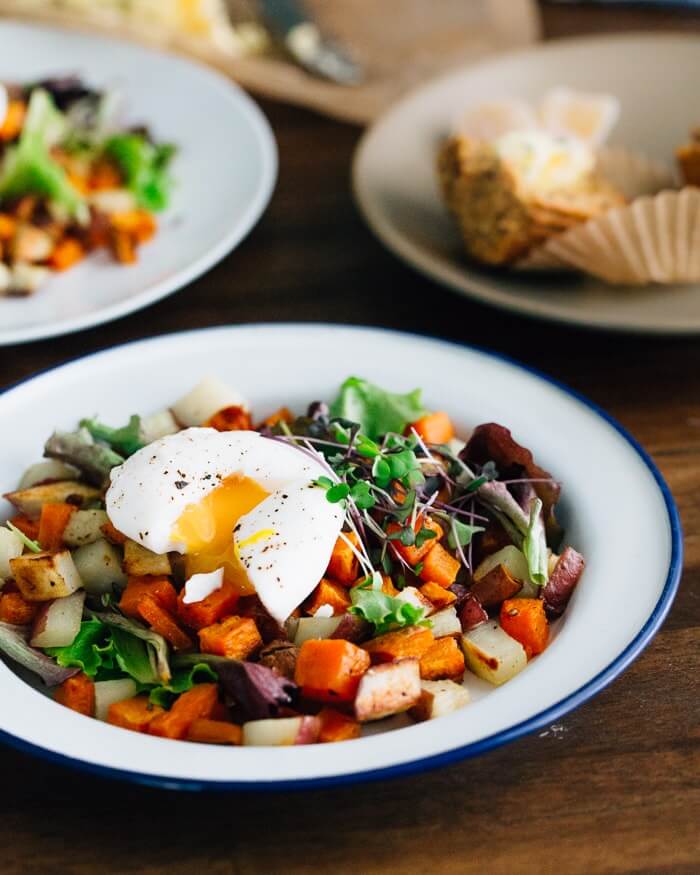 What’s a list of red potato recipes without a good breakfast hash? This eggs and potatoes recipe is exactly what we crave: sweet potatoes and red potatoes that are roasted until crisp, then topped with an ooey gooey egg yolk. The yellow yolk spills out of the white, creating a sort of sauce for the entire dish. It’s so, so good: and of course it’s perfect for brunch too! 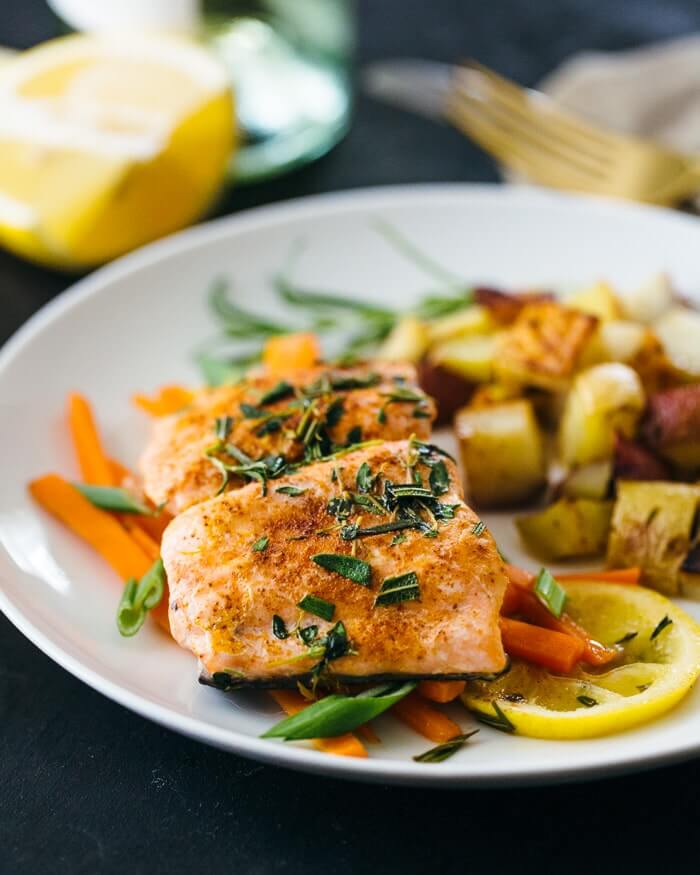 Red potatoes are the perfect side dish, and why not accessorize them with salmon? Salmon en papillote is a fancy French way of saying “salmon in paper.” The fish is cooked in a parchment paper packet for just under 10 minutes until it’s moist and delicious. We’ve added lemon, thyme, and rosemary for flavor, and cooked it with thinly sliced carrots. Some added roasted red potatoes make it a meal. 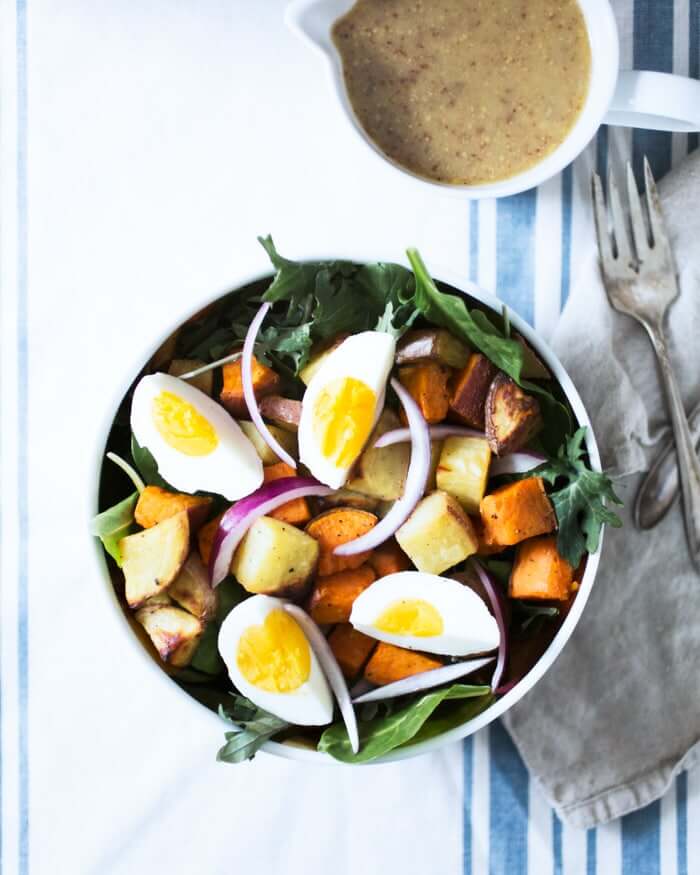 In our red potato recipes, salads feature prominently. This salad isn’t the typical potato salad! It’s a mix of roasted potatoes served over greens instead of with mayo. It can be either a main or a side salad featuring roasted red potatoes, sweet potatoes, hard-boiled eggs and greens with our very favorite honey mustard dressing. And it’s so, so delicious! 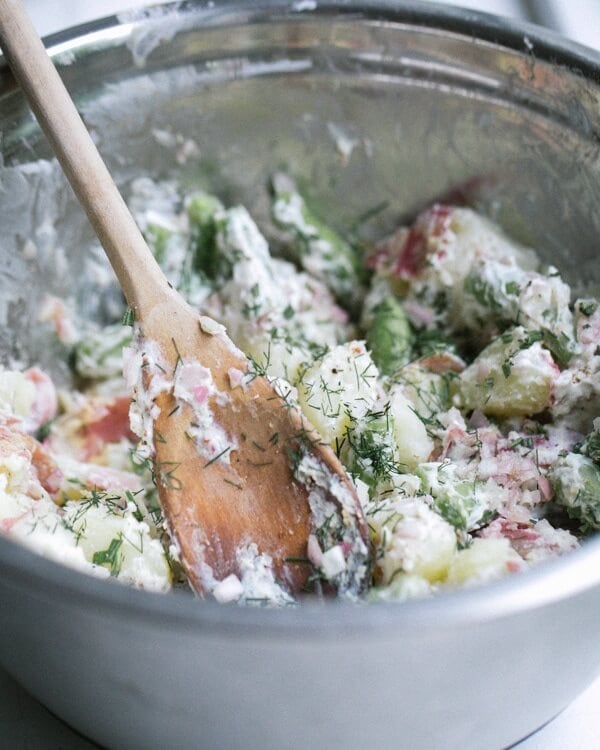 And now for a more traditional potato salad in our red potato recipes! This one is an herby red potato salad with a creamy Greek yogurt sauce, mixed with fresh dill and rosemary. It’s also filled with fresh green snap peas! The salad is simple, delicious, and still incredibly tasty after several days in the refrigerator. It’s a great way to use any fresh herbs you have on hand. 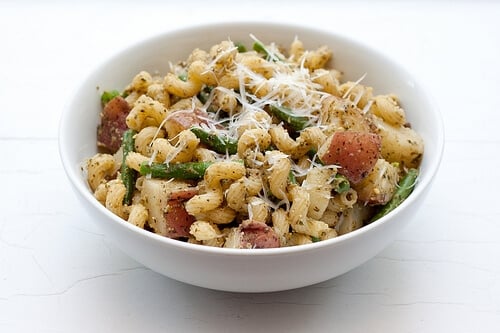 Red potatoes in pasta? Yes, and it’s very tasty too. Pasta and potatoes may sound like an unusual combination, but it’s actually a traditional way of serving pesto in northern Italy. In Genoa, pesto’s birthplace, Italians boil green beans, potatoes, and pasta (sometimes all in the same pot) and serve it with a pesto sauce. It's incredibly tasty and one of our favorite red potato recipes to date. 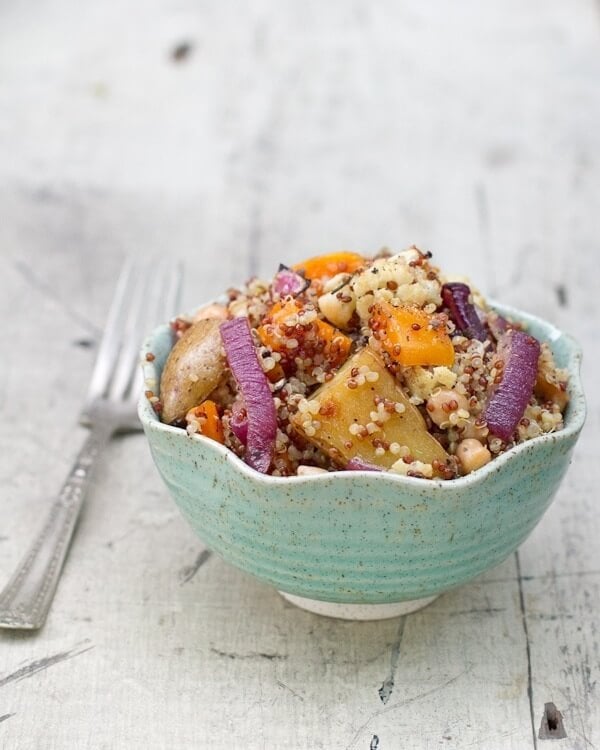 Here’s a lovely idea for red potatoes: combining them with lots of roasted veggies and quinoa! The basic idea is to roasted vegetables in your oven with some herbs and seasonings, and then combine them with a grain. This recipe uses a combination of butternut squash, fingerling potatoes, red onions, and cauliflower, as well as fresh rosemary. 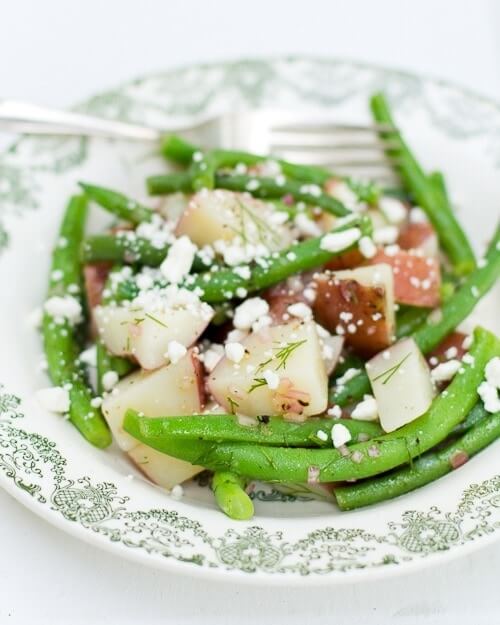 This could be one of the most perfect red potato recipes: the beautiful combination of boiled red potatoes, crunchy bright green beans, and fresh dill. They’re dressed with a combination of sherry vinegar, olive oil, and shallot, which mesh together into an understated but delicious meld. 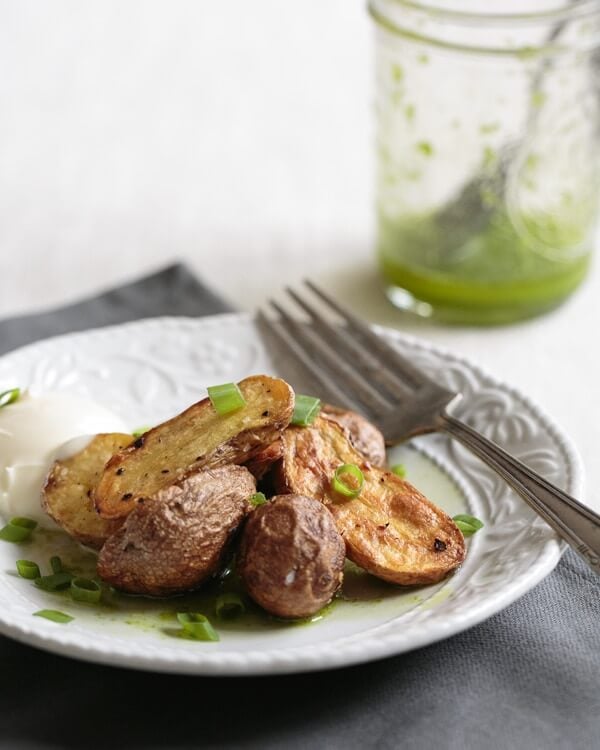 Looking for more recipes with potatoes?

Outside of these red potato recipes, here are a few more recipes with potatoes we love: