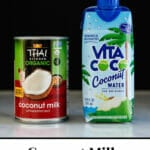 The difference between coconut milk vs coconut water? Here’s how to make sure you get the right ingredient for your recipe.

What’s the difference between these coconut products? Here’s a breakdown:

What is coconut milk? Coconut milk is a milk extracted from the pulp of coconuts. It is very rich and has a high fat content. Coconut milk is a traditional ingredient used in Southeast Asian and East African cuisine, as well as Latin American and Caribbean foods. You can also buy coconut milk as a non-dairy beverage in a refrigerated carton, which is essentially canned coconut milk with added water (read more here).

What is coconut water? Coconut water is the water that comes from inside a coconut that’s not yet ripe. It’s marketed as a sports drink because it’s high in potassium and good for hydration.

Well, it’s not unhealthy! But claims you may have heard about it promoting weight loss or healing disease are just not evidence based. Coconut water is high in potassium, but it’s also high in sodium. Per Mayo Clinic, if you’re worried about hydration, stick with plain old water.

You cannot substitute one for the other!

Did you buy coconut water instead of coconut milk, or vice versa? Sorry to break it to you, but they’re not the same! You cannot substitute one for the other. Why?

What can you make with coconut milk?

Coconut milk works as a non-dairy milk substitute (just don’t use too much of it!). It’s great in curries and smoothies. Here are some coconut milk recipes to try: