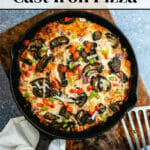 Want the best homemade deep dish pizza of your life? Try this epic Cast Iron Pizza recipe! Your heavy cast iron skillet is one of the easiest ways to make epically tasty American-style pizza. The crust comes out beautifully puffed and golden, topped with gooey cheese that gets crispy towards the edges. Cast iron skillet pizza is one of the best uses for this heavy pan: in our opinion, at least! This recipe is no-fail: we’ve made it dozens of times with great results. Use our topping ideas below or any toppings you like! Let’s go.

Here’s the thing about cast iron pizza: it takes a little longer than traditional Italian-style pizza, but it’s loads easier. Here at A Couple Cooks, we’ve years honing the art of Italian-style artisan pizza and the perfect Margherita. But this American-style cast iron skillet pizza also has a place in our kitchen: because it’s so easy to do. You’ll need to set aside 2 hours for prep, but most of the time is hands off. Here’s an overview of the process for this cast iron deep dish pizza recipe, in words and photos:

The only equipment you’ll need to make pan pizza is a cast iron skillet! Here’s what to know about the sizing:

What’s the trick to the best cast iron deep dish pizza crust? Two proof times. If you’re an experienced baker (or watch the Great British Baking Show!), you’ll know this refers to resting the pizza dough. Proofing is when you let bread dough rest after you’ve added yeast, so that it rises.

The trick to getting the extra thick crust in this recipe is proofing the dough twice. Now, this means you’ll need to wait for 45 minutes not once but twice. The up-side is that you’ll get super thick, pillowy crust.

One more pro to the cast iron pan pizza method is that you don’t have to worry about shaping the dough, which is the hardest part of Italian-style pizza. Once it’s proofed twice, just press it out into the skillet and you’re ready to bake. Easy as pie! Pizza pie, that is.

One last note about the technique for a cast iron skillet pizza. Once you’ve topped your pizza, you don’t slide it into the oven. Nope, you’ll put it on a stovetop burner first and cook for 2 minutes. This quickly heats up the cast iron skillet so you don’t need to wait for that to happen during baking. So, you’ll get a blazing hot sear on the pizza from the moment it enters the oven!

Bake only one cast iron pizza at a time!

Here’s another thing to note about cast iron pizza. You can only cook one pizza at a time. Unless of course, you have two 10-inch cast iron skillets laying about. Typically one pizza might not sound like enough to feed a family. Here’s what to know:

Last thing to note about this cast iron skillet pizza. You can use our topping ideas in the recipe below OR make your own toppings! The toppings in the recipe are based on our Veggie Supreme pizza and they make your kitchen smell like a Pizza Hut. Really, we can’t speak more highly of them! But there are lots of ideas for other ways to top this pizza. Here are our favorites, in approximate order of deliciousness:

And that’s it! Let us know in the comments below how it goes, and what other questions you might have. Bon appetit!

This cast iron pizza recipe is…

For the pizza dough (for a 10-inch cast iron skillet*)

*Or, use any pizza toppings you like! Go to our Pizza Recipes for inspiration.