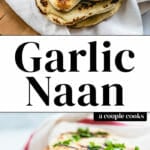 This fast and easy homemade garlic naan is brushed with garlic butter and perfectly chewy! It’s such a treat, you’ll never go back to storebought.

What’s better alongside a steaming bowl of curry than warm garlic naan? This Indian skillet flatbread is always a crowd pleaser: it’s soft, supple, warm and garlic-scented. There’s not much better to sop up savory broth! There are all sorts of creative ways to turn naan into dinner too: like naan pizza! It’s easy to find this famous bread at the store, but the very best way to eat it: homemade, right off the skillet. Here’s our very best naan recipe: it’s chewy, full of flavor, and quicker than most recipes. Here are all our secrets!

Why make this garlic naan?

With loads of naan bread recipes out there, why make this specific garlic naan? Here’s what makes it stand out from the rest:

Fastest way to make naan: with no yeast!

There are two basic ways to make a naan dough: with yeast and with baking powder. Most traditional Indian naan recipes use yeast as the leavener: it’s what makes the bread rise. Yeasted breads require longer proofing times. What’s proofing? Proofing is when you let bread dough rest after you’ve added yeast so that it rises. A yeasted naan recipe requires 1 to 2 hours of proofing time, depending on the recipe.

Some more modern takes on naan bread use baking powder as the leavener instead of yeast (for example, the naan recipe in Indian chef Vivek Singh’s book Curry). Baking powder cuts down the proofing time to just 30 minutes. The texture is slightly more biscuit-y than bread-y, but to us this trade-off was absolutely worth it!

Use a cast iron skillet (if you have it!)

Tip: Whatever skillet you use, heat it until it’s very hot before you add the first piece of dough. If you add the dough before its roaring hot, it won’t cook correctly.

Making naan is easiest with a buddy!

Alex and I have honed our expertise in homemade bread recipes over the past few years. Our sourdough bread is the most popular and has been made by people around the world. (See below for more of our favorite breads.) Here are a few tips we recommend for making this easy homemade naan bread:

After you’ve made this garlic naan, what’s the best way to store it? Here are some tips:

Recipes to eat with garlic naan

There are lots of ways to eat this garlic naan bread! It’s most natural with curry, but we have several naan pizza recipes as well. Here are our favorites in both categories:

This garlic naan recipe is…

Vegetarian. For vegan, plant-based, and dairy-free, see the substitutions listed in the recipe.

This fast and easy homemade garlic naan is brushed with garlic butter and perfectly chewy! It’s such a treat, you’ll never go back to storebought. (Vegan substitutions listed, or go to Vegan Naan.)

*A cast iron skillet is the best option, since it gives the signature blackened spots. A skillet works too, but won’t get as blackened.

If you love to make bread, we’ve got lots of resources for you! Here are our favorite bread recipes: