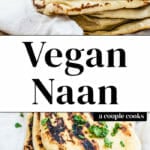 This easy homemade vegan naan bread is quick to make and perfectly soft and chewy! Serve this Indian skillet flatbread with curry or as a quick pizza crust.

The perfect pair to a steaming bowl of curry? Soft, fluffy naan bread. This Indian skillet bread is so delicious, it’s easy to get distracted by this traditional side dish. Alex and I love recommending an Indian or Southeast Asian style vegetable curry as an easy plant-based meal. But most traditional naan recipes have butter and/or Greek yogurt. Enter: this vegan naan recipe! It’s easy to make, perfectly fluffy, and tastes just as good as our traditional buttery garlic naan. Here’s how to make it!

Why make this vegan naan?

This vegan naan bread recipe is a little different than most: and even more delicious, we’d contend! Here’s why to make it:

The quick way: use baking powder, not yeast!

Our researched showed that modern Indian chefs are experimenting with baking powder naan: for example, the naan recipe in Indian chef Vivek Singh’s book Curry. The texture is very slightly more biscuit-y than bread-y, but most people wouldn’t notice a difference. To us, this is absolutely worth it to be able to make naan in under 1 hour!

The secrets to vegan naan

To create this vegan naan recipe, we based it on our Garlic Naan, which also uses baking powder and not yeast. We had several non-vegan ingredients to contend with to adapt this to a vegan bread. Here’s how we did it:

What is coconut cream?

Important note: Coconut cream is not coconut milk! It’s richer and creamier, almost the texture of coconut oil. When you’re shopping, look for cans marked “Coconut Cream.” What if you can’t find coconut cream, but you can find coconut milk? Well, there’s actually a way to separate out the coconut cream. Here’s what to do:

Use a cast iron skillet, if you have it!

Tip: Make sure you heat whatever skillet you use until it’s very hot before you add the first piece of dough. If you add the dough before its roaring hot, it won’t cook correctly.

After you’ve made this vegan naan, what’s the best way to store it? And how to quickly reheat it? Here are some tips:

Recipes to eat with vegan naan

Here are a few of our favorite plant based and vegan recipes that pair well with naan!

This vegan naan recipe is…

This easy homemade vegan naan bread is quick to make and perfectly soft and chewy! Serve this Indian skillet flatbread with curry or as a quick pizza crust.

*Coconut cream is not coconut milk! It’s richer and creamier, almost the texture of coconut oil. Look for cans marked “Coconut Cream.” If you can’t find coconut cream, you can also buy a can of full fat coconut milk and refrigerate overnight; then open it and use only the coconut cream that has hardened on top. (Some coconut milk brands come already separated, so refrigeration may or may not be necessary.)

**A cast iron skillet is the best option, since it gives the signature blackened spots. A skillet works too, but won’t get as blackened.