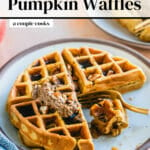 Pumpkin waffles are perfect for fall! They’re lightly spiced and made with real pumpkin puree for a cozy special breakfast.

It’s fall and that means: cue the pumpkin recipes! It’s our goal to turn just about everything imaginable into a pumpkin flavored version of itself. Of course, that extends to hummus, pasta, coffee, pancakes, soup, oatmeal…and waffles! These Pumpkin Waffles are the ideal fall breakfast, featuring cozy spices and pumpkin puree. They’re just sweet enough and topped with a little pure maple syrup…let’s just say they went over like a charm over here.

Here’s the thing. Pumpkin is very dense, so adding the stuff to waffles can make them thick and weighty. This pumpkin waffles recipe uses just enough pumpkin to bring in a light orange hue, but not so much that each bite is weighed down with vegetable puree. Here are the ingredients you’ll need for these pumpkin waffles:

As you probably know, most of what people love about pumpkin are the spices: not the actual pumpkin itself! Pumpkin is pretty bland and bitter right out of the can. Our favorite way to flavor it is with our homemaker spice blend, which makes a large batch. But you can also mix up the individual spices just for this recipe. Here’s what to do:

You can make these pumpkin waffles two ways: using a standard waffle maker or make them into Belgian waffles. Our top choice? Belgian. They’re taller and fluffier than standard waffles, and just plain more fun to eat. Here are the differences between the two:

Looking for a waffle iron? Here’s a Belgian waffle iron we use and love!

Make ahead instructions for pumpkin waffles

Don’t want to do all the work every time? Make a double batch of these pumpkin waffles and save more for later!Here’s what to do:

Once you’ve whipped up a batch of pumpkin waffles, the fun begins! Top them up to make them into a healthy or no so healthy breakfast. Here’s what we used, and a few more ideas:

There are so many ways to eat pumpkin as a fall breakfast idea! After you make these pumpkin waffles, you absolutely must try:

This pumpkin waffles recipe is…

Pumpkin waffles are perfect for fall! They’re lightly spiced and made with real pumpkin puree for a cozy special breakfast.

Waffles we reserve for special occasions…they’re the best breakfast treat! Here are a few more waffles recipes to try: