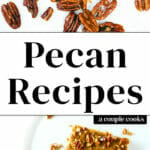 Here are all the best pecan recipes to use this super nut (that aren’t pecan pie)! From glazed to energy bars to granola, there’s no end the tasty options.

Looking for tasty recipes that use pecans? This tasty super nut is so delicious, and there are so many ways to use it outside of the traditional pecan pie. Use it to top your salads, grind it up and put it in energy bars, or use it for maple pecan flavored healthy granola (yum)! You can even use it in savory dishes like stuffed squash, pizza, and frittatas. Is there anything a pecan can’t do? Not really.

Here are all our best pecan recipes to use up the last of your bag! Here’s how to use this nutrient dense and protein-packed nut to the best of its potential. 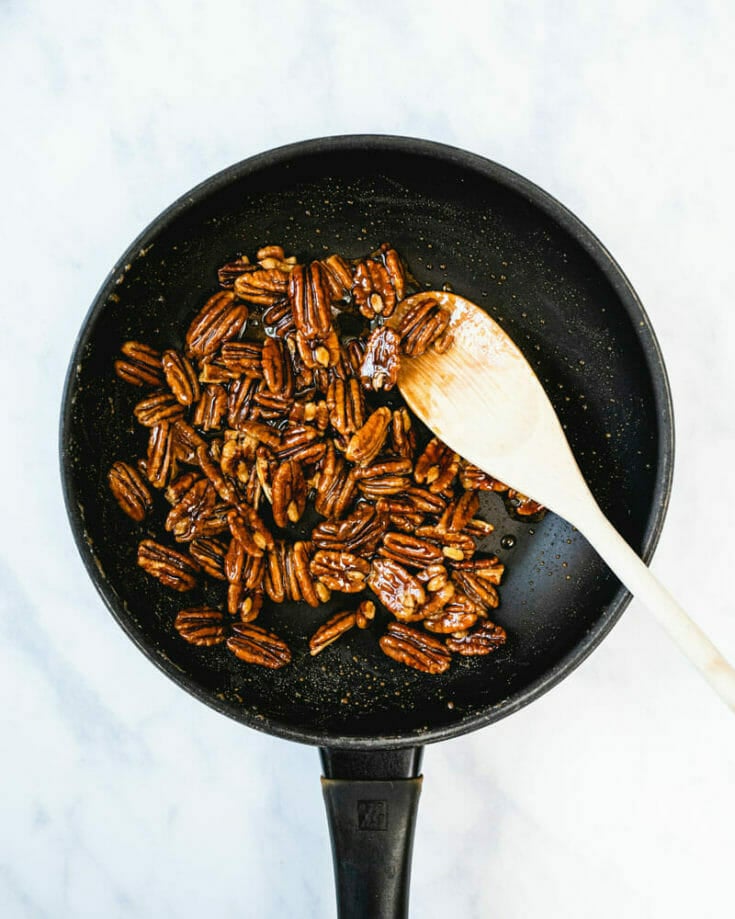 They’re sweet, a little salty, and have the perfect crunch! This glazed pecans recipe is so tasty, you’ll want to make up a batch immediately for topping all your salads. Funny enough, they’re also the perfect little treat for when you’re craving sweets. Use them to top this Spinach Apple Salad, or snack on them right out of the container. 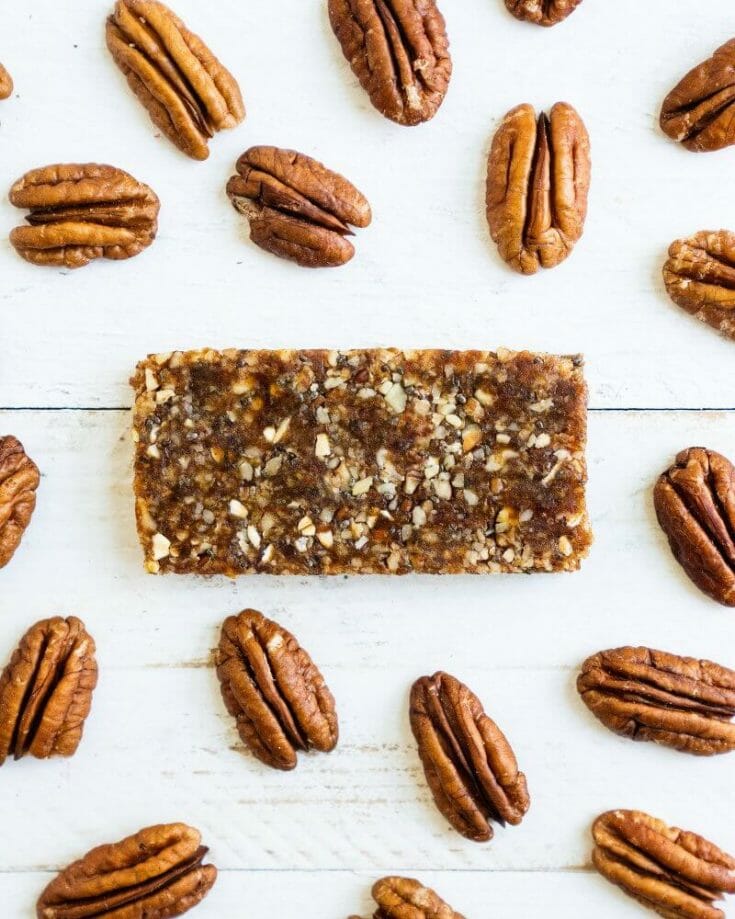 This homemade pecan energy bar recipe is perfect for healthy snacks. And let me tell you, our son Larson is OBSESSED with them, too! Not only are these kid approved, they’re perfect for adult snacking too. The sweet flavor is reminiscent of pecan pie, and they’re full of superfoods like pecans and chia seeds. 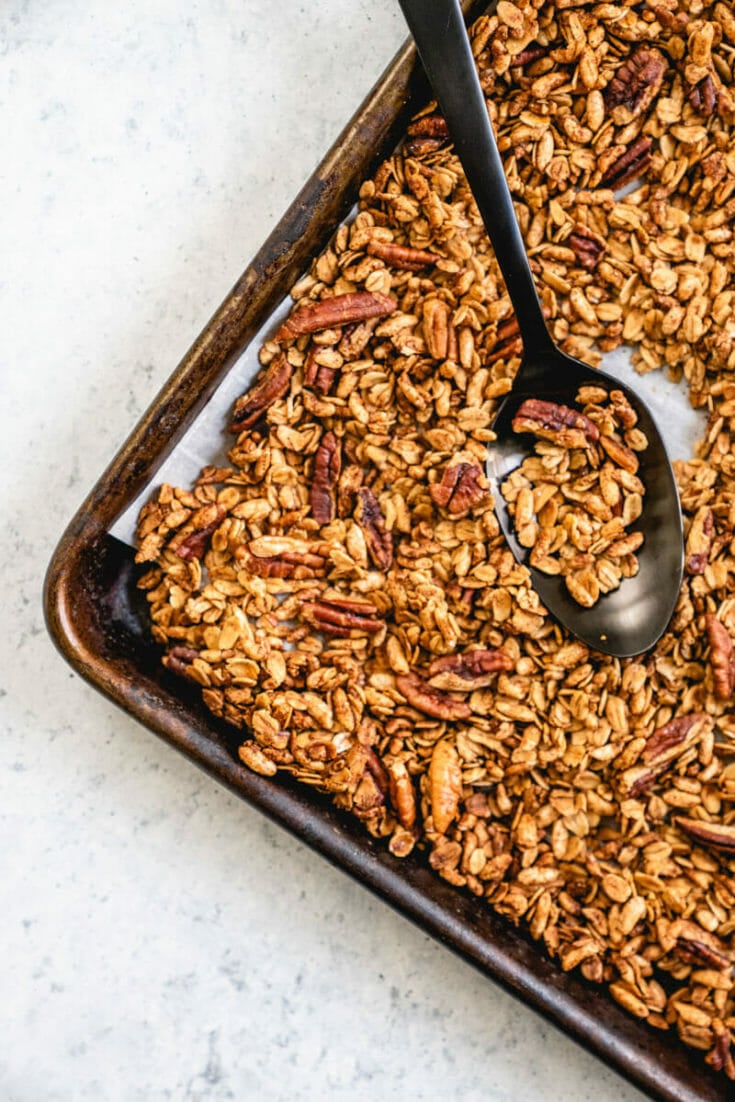 Want a healthy granola recipe that’s actually good for you? Here’s the only recipe you need! This maple pecan granola recipe is nutrient rich and 100% delicious, featuring oats, puffed rice, pecans, and maple syrup. It's warm scented with cinnamon and allspice, perfectly crunchy, and has just the right amount of sweetness. 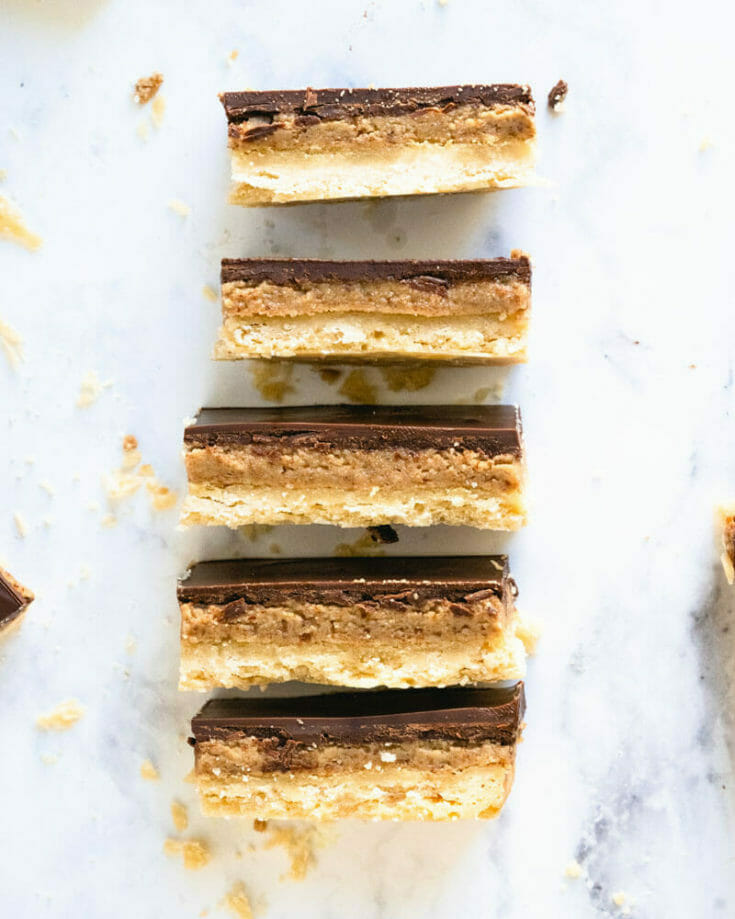 Ever had Millionaire bars? Sometimes called Millionaire’s shortbread, they’re a layered bar of shortbread, caramel, and chocolate: like Twix candy! But this cookie originates from the British Isles and it’s a delicious homemade treat. This rendition of this famous bar replaces the caramel layer with pecan butter. It's rich and decadent, but brings in all the nutrients and plant based protein of pecans! 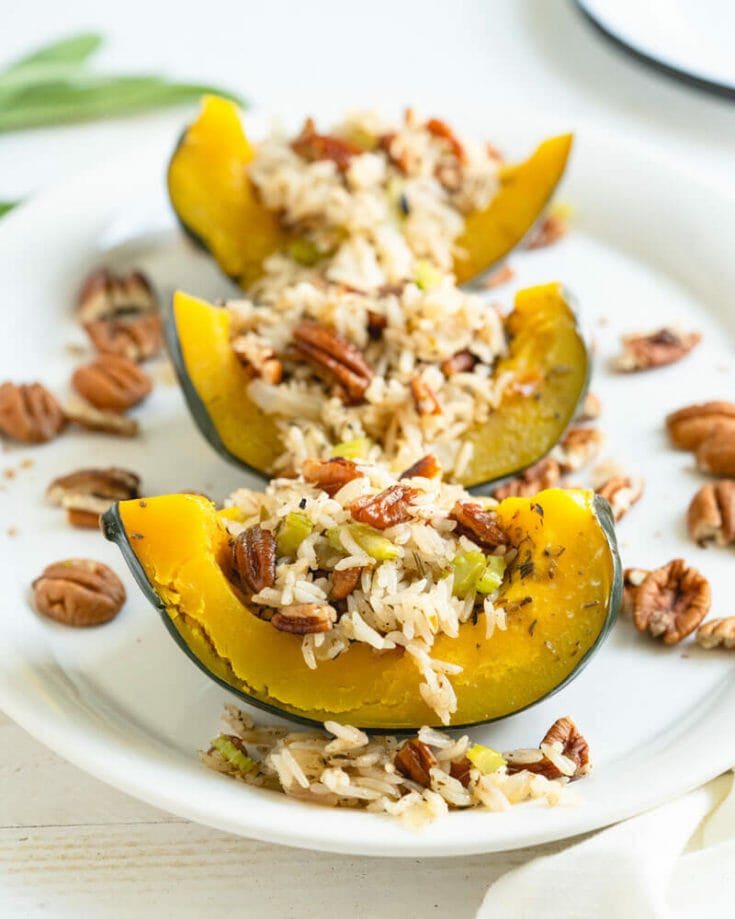 Want a main dish pecan recipe? This stuffed squash is roasted until it's tender, then draped in a toasted pecan rice stuffing that makes your kitchen smell like a fall paradise! You know that scent of onions, celery and leeks cooking in butter? Well, this recipe delivers it in spades. It’s seriously crowd pleasing. Everyone we’ve served it to becomes a believer…and then immediately asks for the recipe. 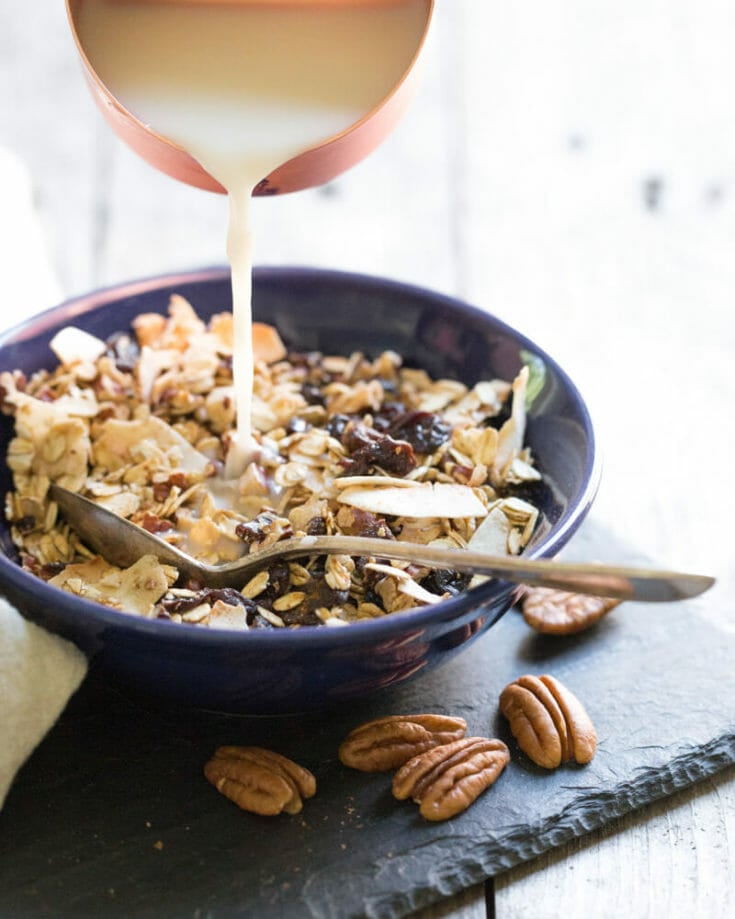 Here's a recipe for homemade breakfast cereal with pecans, called muesli! Muesli is basically a healthy version of granola: a mixture of rolled oats, dried fruits and nuts that’s traditionally eaten with milk for breakfast. This one stars toasted pecans and coconut, which add a delightful crunch, along with oats, cinnamon and dried cherries. There's so much flavor going on, you won't be able to put it down! 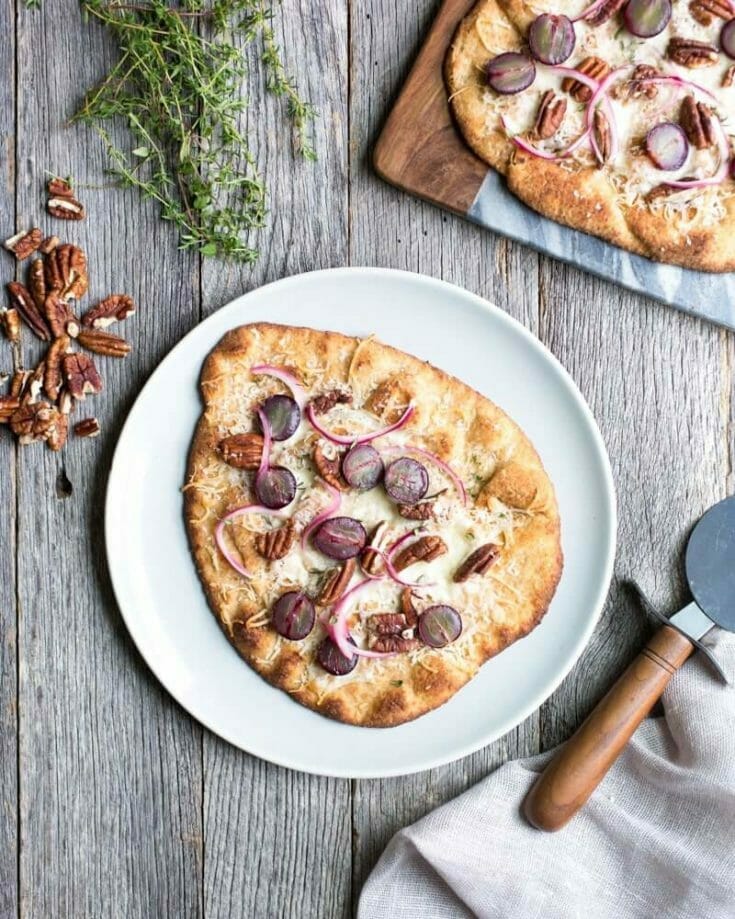 Here's a way to use pecans in an easy dinner recipe: as a pizza topping! It’s a bit outside the box, but adding pecans gives a satisfying crunch and texture that can’t be beat. These pizzas are made with naan bread to make for quick assembly. Then they're topped with mozzarella, fresh thyme, grapes and pecans, which combine sweet and savory to make a uniquely delicious pizza! 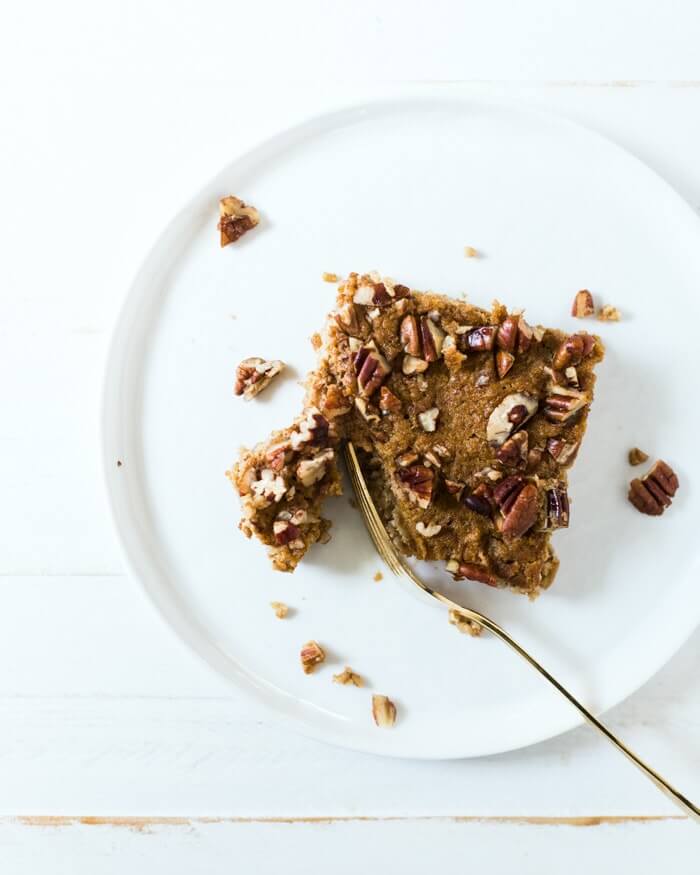 This pumpkin pecan oatmeal tastes like pumpkin pie—really!—but is made of steel cut oats. Who doesn’t want to eat pumpkin pie for breakfast? It’s also fairly healthy: with a minimal amount of maple syrup as a natural sweetener, it’s a nice whole grain option for mornings. Top with crunchy pecans and it's irresistibly delicious. 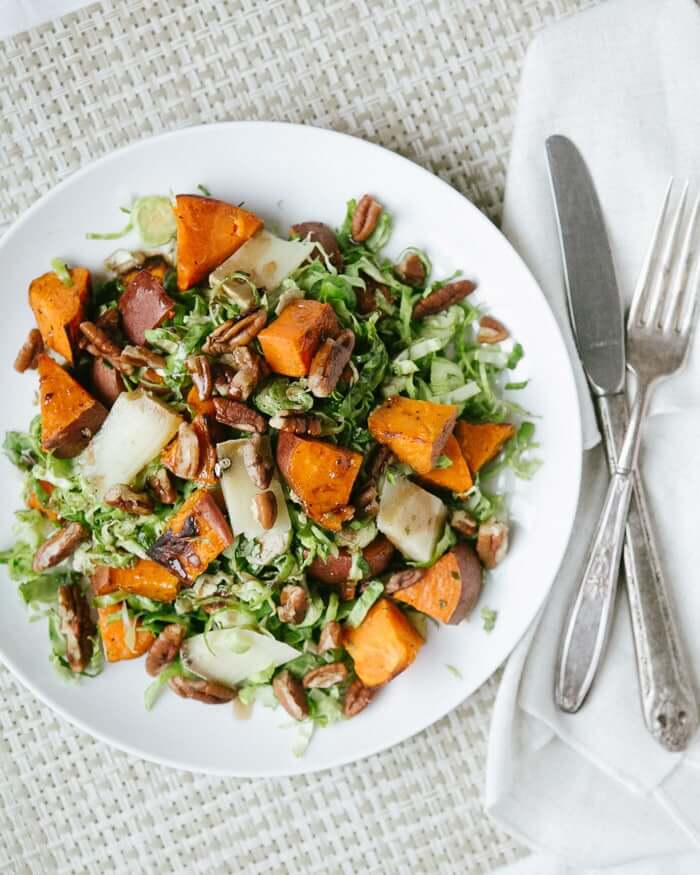 Raw Brussels sprouts, thinly sliced into feathery ribbons, form the bed of this tasty salad! They're combined with tender sweet potato and crunchy pecans into a hearty main dish salad. It's filling and could be eaten either as a side dish or a vegetarian main dish salad. Top with Parmesan cheese or Manchego cheese for a sophisticated addition.

Here are a few interesting things about this tasty nut that mayinspire you to make even more pecan recipes. Pecans are:

Glazed pecans add the perfect crunch to salads, or snack on them by the handful! These sweet and salty nuts are covered in a coating of maple syrup.

*If this happens, don’t worry! They still taste great, they just look more like sugared pecans.