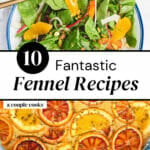 Here are all the best fennel recipes to make the most of this star ingredient: fresh and dried! Salads, soups and more are all better fennel.

Got fennel? This unique ingredient is an incredible treat in the kitchen. Fennel is a vegetable that’s a member of the carrot family, but it looks more like a cross between an onion, celery and dill! It has a large root, stalks, and leafy fronds at the top. Fresh fennel has a black licorice or anise flavor. But you can also cook with the dried fennel seeds: they’re fantastic for adding savory, hearty flavor.

Here are all the best fennel recipes to make with fresh fennel or the dried seeds! Try stunning and refreshing fennel salad, or sweet and caramelized roasted fennel. Or use the seeds to add hearty and savory flavor to pasta sauces and pizza toppings. We’re getting hungry so…let’s get cooking! 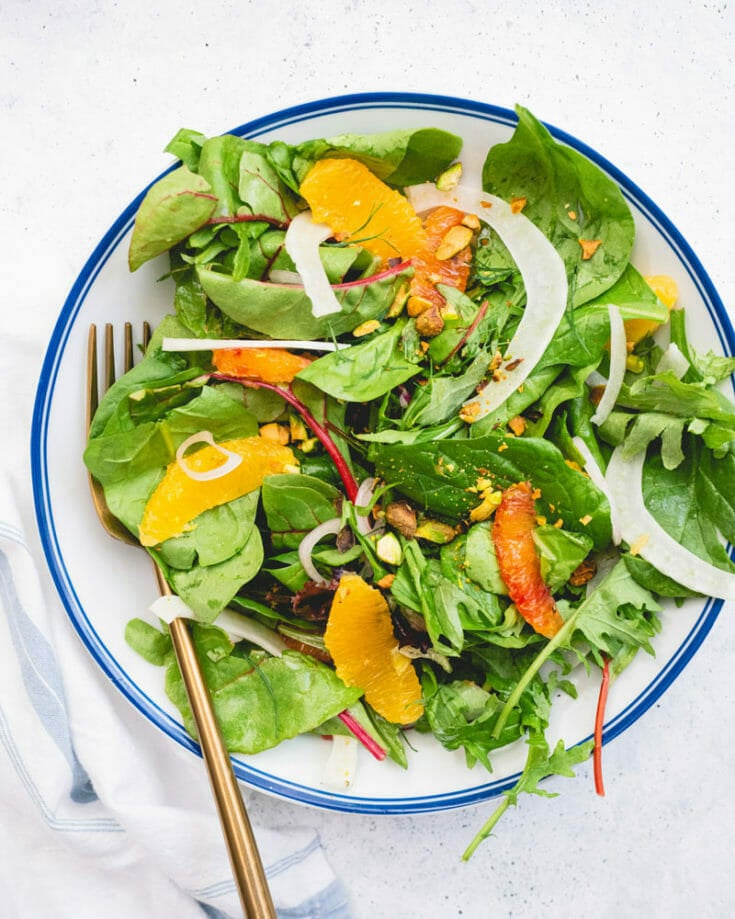 One of the best fennel recipes around? Fennel orange salad! It highlights all the beauty of sliced raw fennel and its subtle licorice essence. Add to that a famous pairing: juicy oranges, with their vibrant color and citrusy flavor! Throw it over greens with a zingy homemade citrus vinaigrette, and wow! It’s one of the most unexpectedly delicious salads you'll have. 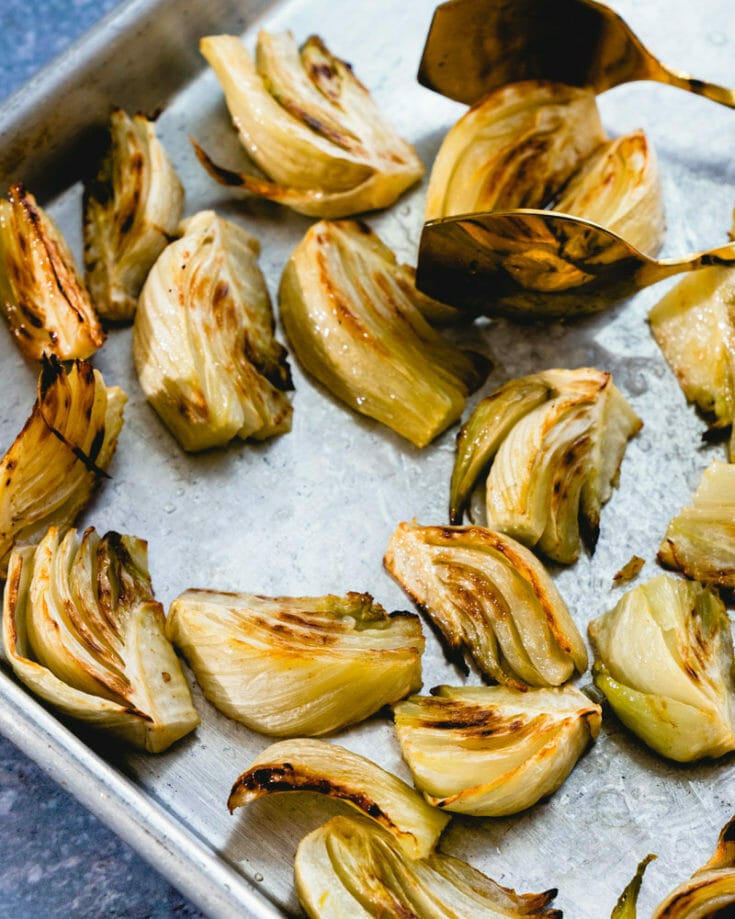 Stop right now and make yourself a pan of roasted fennel! Roasting this vegetable is our other go-to fennel recipe along with salad. Raw fennel has a crunch and black licorice flavor, but its roasted self is something different altogether. It becomes sweet and caramelized: almost like roasted onions but even more irresistible! Baked fennel makes easy and elegant side dish, especially for a Mediterranean or Italian-style meal.

What makes the best lentil soup? Fennel! Here you'll use a fennel bulb like an onion, sauteing along with onion and garlic at the beginning of the recipe. Let’s just say that everyone we’ve served it to immediately asks for the recipe…and seconds. This one is so full of hearty flavor, you’ll feel like you’re wrapped in a cozy hug. 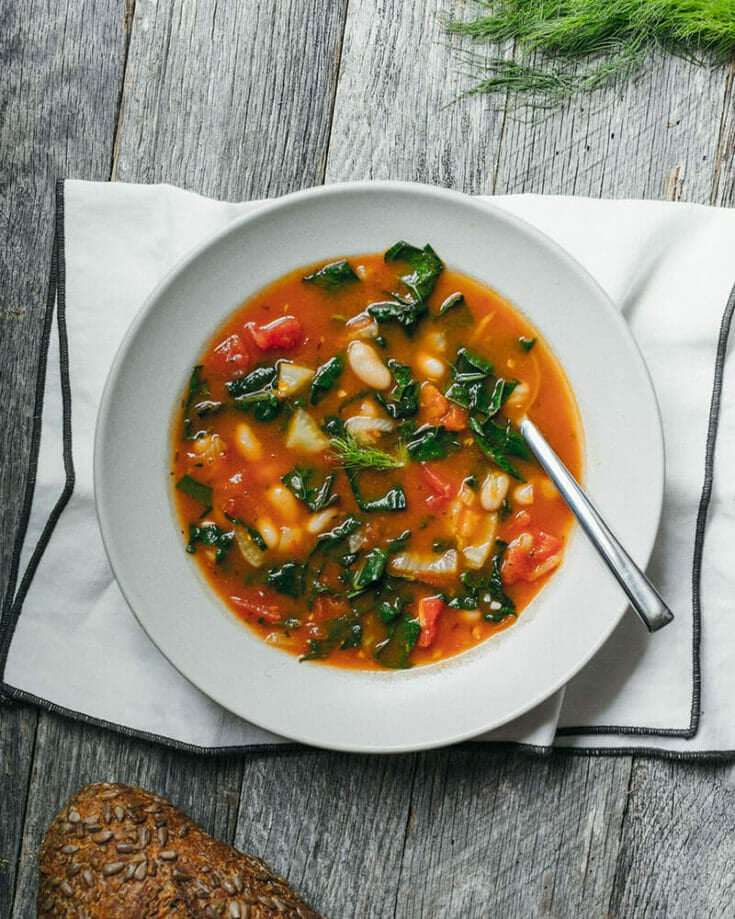 Another great soup with fresh fennel? This Tuscan white bean soup recipe! This Italian-style soup is over the top delicious: and people tell us is tastes like liquid pizza! The flavor has intrigue from the sautéed fennel used in place of onion and smoked paprika: they give the soup a subtly smoky and hearty flavor. 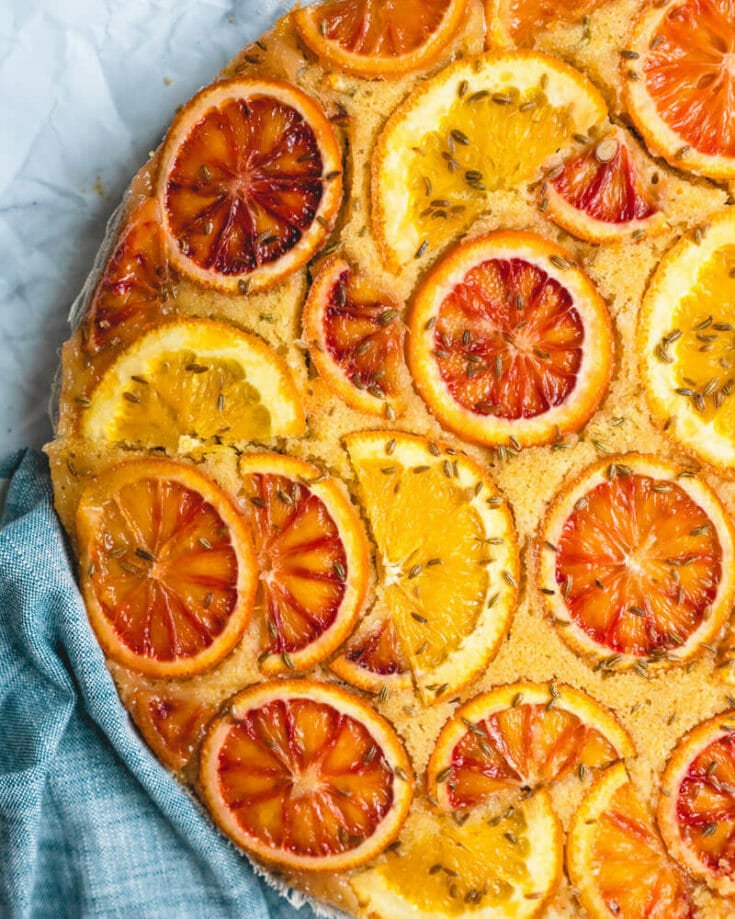 Let's move on to recipes with dried fennel seed, shall we? Here's a fennel recipe that's a unique way to use the seeds: cake! Fennel and orange are a natural pairing, and here they're featured in an upside down cornmeal cake. The savory, herbal fennel adds just the right amount of complexity and pairs well with the lightly moist cake. And the thin orange slices come out beautifully sweet, almost like a candied orange. 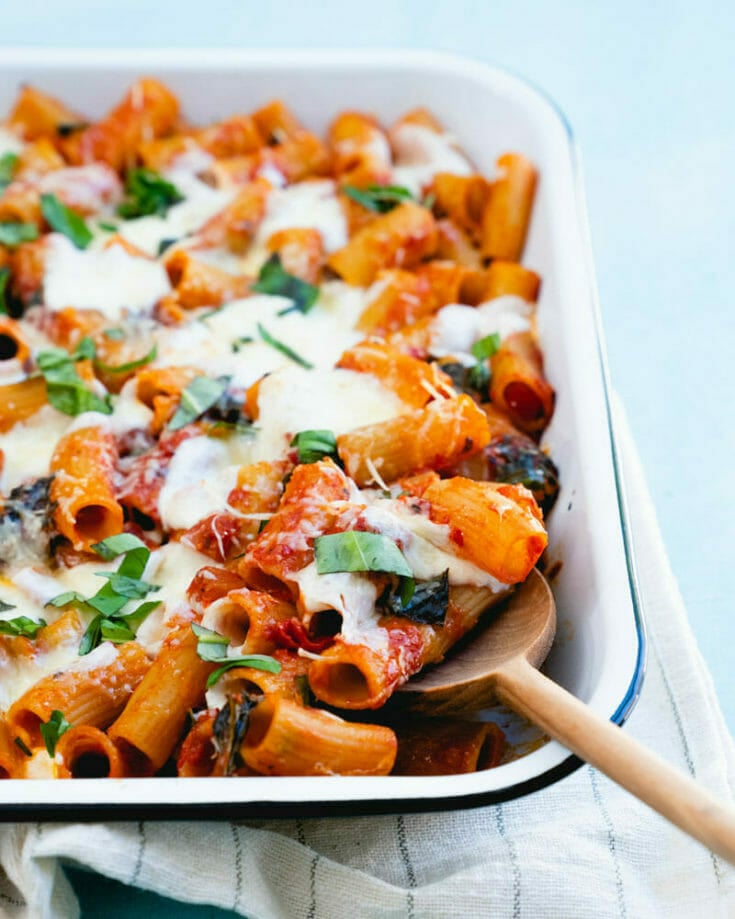 Another great way to use fennel seeds? Pasta sauce! This baked rigatoni recipe marries basic Italian flavors into a mess of garlicky, savory goodness. The tomato sauce is full of garlic and fennel seed for meatiness, and it’s got lots of fresh peppery basil for a herbaceous kick. Cover it in gooey mozzarella and you’ve got a dish that’s hearty enough to please any eater. 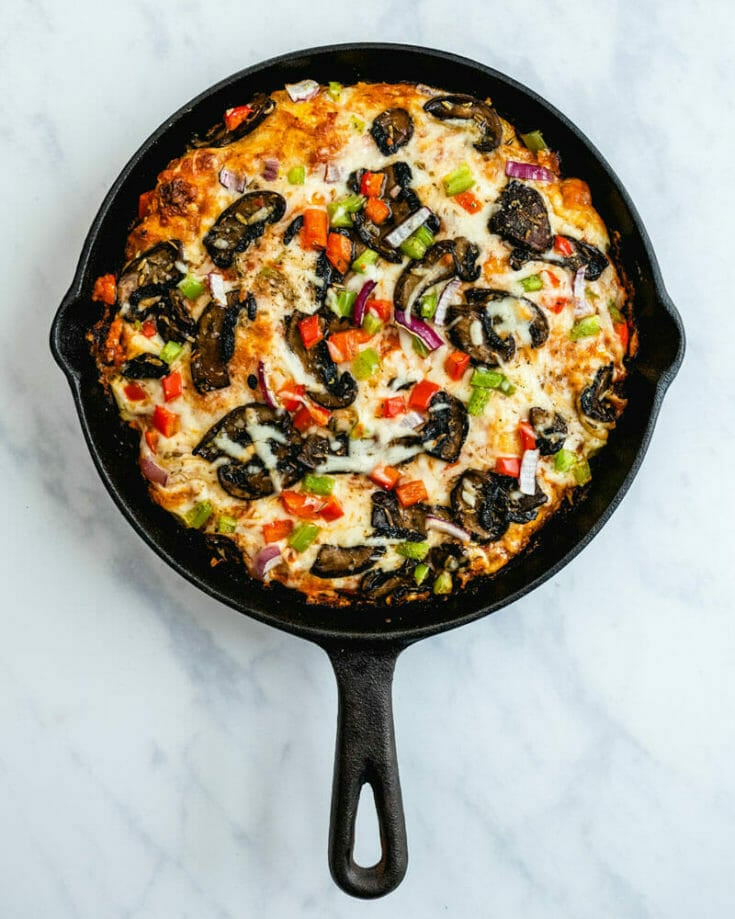 Another way to use fennel seed in recipes? As a pizza topping! This epic homemade pan pizza tastes just like the thick crust pizza from your favorite pizzeria. Cooking it in a cast iron skillet makes the crust crispy on the outside and soft on the inside. The supreme-style toppings are cooked with fennel seed to make them taste meaty and irresistible. 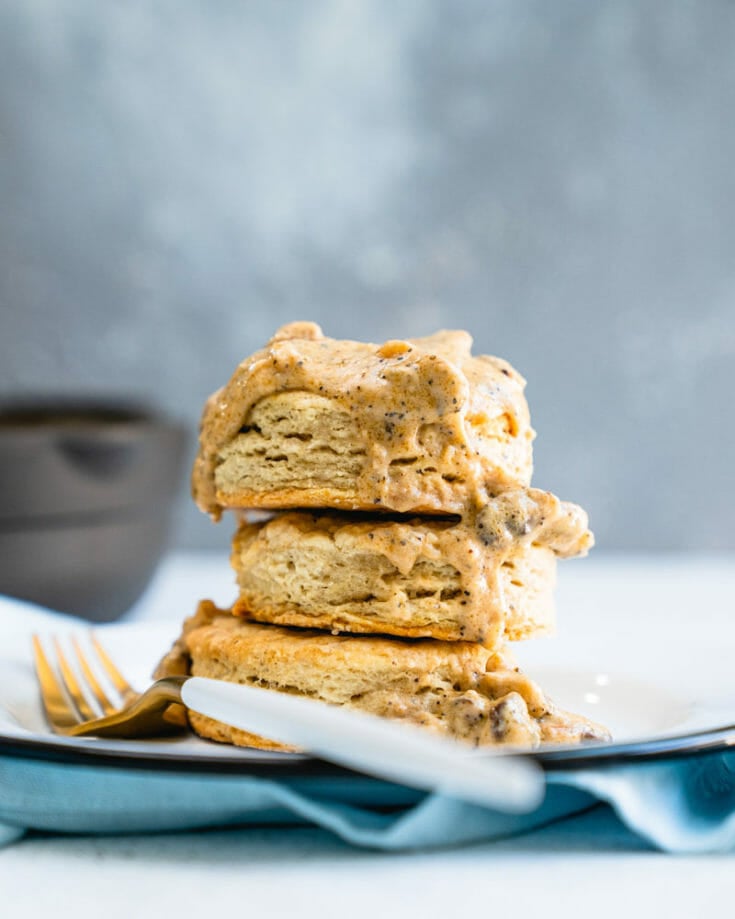 Fennel seed is great for adding meaty flavor to vegan recipes: especially when trying to mimic sausage! If you love this hearty Southern-style breakfast but also want to cut back on meat, this is the perfect way to indulge. The creamy, savory mushroom gravy is every bit as comforting and cozy as a sausage country gravy: the meaty flavor comes from the fennel! 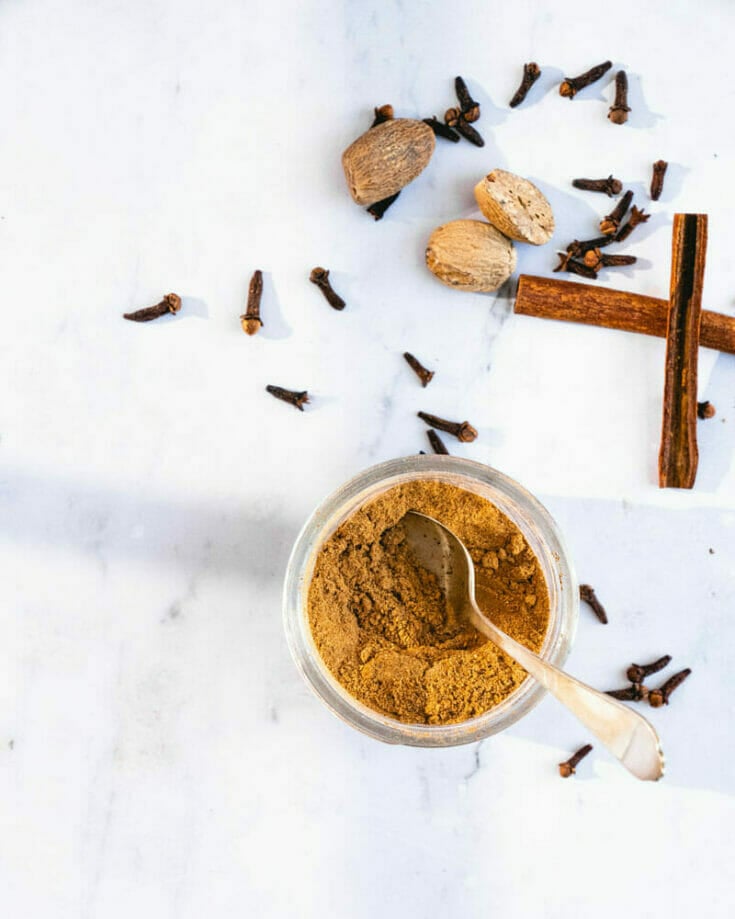 Another great way to use fennel seed in recipes? In spice blends! Here’s how to make an easy DIY blend of these chai spices! There’s a myriad of variations on the spices used in this classic Indian recipe: but fennel adds a lot of complexity to the mix. This recipe is a quick and easy mix that works for beverages like masala chai or for throwing into baked goods like cookies and muffins.

Last up in our fennel recipes: Shepherd's Pie! This rustic savory pie has only veggies, but you don't miss it because of the fennel seed. It’s cozy comfort food to the max! Imagine: a creamy gravy filled with tender vegetables, lentils and scented with fennel and sage. Then a fluffy layer of Yukon gold potatoes, topped with fresh rosemary. It’s layered together in a baking dish and then baked until golden.

How to cut fennel!

Using fresh fennel in these recipes? You’ll need to learn how to cut this unique veggie. It’s not hard at all, once you’ve tried it once! Here’s our master method for how to cut fennel:

Here’s a refreshing and easy side dish: fennel orange salad! It pairs juicy orange and the subtle licorice essence of fennel with a citrus vinaigrette.

*Use whatever type you’d like! It’s nice to use a mixture of greens to vary texture and flavor. If you’re using baby kale, arugula or spinach, make sure they’re mixed with some other milder greens. Mixed lettuces are also nice, as they add a refreshing crunch.