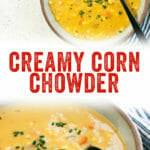 When sweet corn starts to appear at farmers markets, Alex and I crave corn chowder—no matter how hot it is outside! There’s something about potato corn chowder that makes it work both in the heat of summer and on cozy fall days, too. This one if our best ever corn chowder recipe, if we must say ourselves. It’s based on a vegan corn chowder recipe from our cookbook, Pretty Simple Cooking. But for this one we wanted to try a classic corn chowder: with milk and butter! It turned out seriously creamy, with a savory, salty, and sweet flavor from simmering the corn cobs directly in the pot. (And it’s seriously satisfying paired with a side of Flaky Buttermilk Biscuits.)

How to make corn chowder

Corn chowder is a simple concept: chop veggies, then simmer in milk and broth to perfection. This recipe takes a bit of prep time because of all the chopping. Depending on your prowess with knife skills, it can take a range of time to prepare. Even better: grab your wife, husband, girlfriend, boyfriend or kids (if they’re old enough), to help with all the prep! Here are all the vegetables you’ll have to chop:

Another way to eat corn as a soup? Try light and healthy Fresh Corn Soup!

Secrets to the creamiest corn chowder (with a healthy spin)

After the vegetable chopping, the remainder of making this potato corn chowder recipe is a breeze! You’ll saute the veggies, then add milk and veggie broth and simmer. Here are a few tricks we’ve used in this recipe to make it ultra creamy and flavorful, yet still have a little bit of a healthy spin:

Alex and I love sweet corn recipes. However, every time I see a recipe that calls for cutting corn off the cob, I wince a little imagining the spray of flying yellow specks all over our kitchen. Cutting corn off of the cob can be a little messy, and this potato corn chowder calls for 6 ears of corn! Here are a few ways we like to cut corn without making a mess:

Another great way to cook corn? If you’re planning to make it on the cob, try our Oven Roasted Corn on the Cob. It’s the easiest way to cook it! Or try some of our Best Corn Recipes or How to Cook Corn.

This corn chowder recipe is…

*If desired, you can use 3 cups frozen corn kernels in the corn off-season.

This classic corn chowder is one of our favorite soups; here are a few more we love: