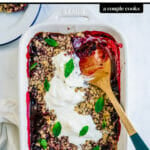 This blackberry crisp recipe (aka blackberry crumble) has a crunchy oat topping and sweet berry filling. It’s the best way to end a summer meal!

What’s better than a sweet berry crisp on a summer evening? There’s something this simple dessert that’s quintessential summer, the perfect ending to a shrimp boil or grilled meal. Here’s our best nostalgic Blackberry Crisp recipe, aka the Blackberry Crumble! It’s just sweet enough, filled with sweet berries with a hint of orange and vanilla, and a crunchy oat crumble topping. Even better: you can make it with fresh or frozen berries! Use it with fresh summer berries from the market, or try it with the frozen variety. Ready to get baking?

Elements in this blackberry crisp (aka crumble)

This blackberry crisp (aka blackberry crumble) is easy to make, and it has several great features that take it from good to great. Here’s what to know about baking up this sweet berry dessert:

What’s the difference between a crisp and crumble, anyway?

Well, it’s matter of terminology. There was originally a difference between a blackberry crisp and a blackberry crumble. A crisp had oats, whereas a crumble did not (per The Kitchn). So, the crisp topping was crunchier because of the oats!

Today sometimes in the US people are specific about terms, but the difference has really faded over time. You can use either one interchangeably! In the UK, Australia and New Zealand, the term “crumble” is used to encompass both types of desserts.

Mix the layers, then bake until golden brown

The great thing about a blackberry crumble or crisp? There’s no technique involved. Mix the berries and filling ingredients, mix the topping, layer and bake! Easy as that. Here are a few tips to this process:

This recipe is very customizable to various diets and preferences. Here are a few substitutes that work just as well as the original recipe:

Other ways to vary a blackberry crumble: change up the berries! There are lots of ways to flex this recipe, depending on the fruit you have on hand. Here are some ideas:

You can eat this blackberry crisp plain, but it’s even tastier with a little topping! Here are some of our favorite ideas:

Got leftovers? Freeze them! You can freeze this blackberry crisp for up to 3 months in a sealed container. Reheat it in a 350 degree oven until bubbly and the topping is crispy. It’s not quite as good as fresh, but it’s close!

This blackberry crisp recipe is…

Vegetarian. For gluten-free, vegan, plant-based, and dairy-free, see the recipe below.

This blackberry crisp (aka blackberry crumble) has a crunchy oat topping and sweet berry filling. It’s the best way to end a summer meal!

For the crumble / crisp topping

*For a very forward orange flavor, use ⅓ to ½ teaspoon orange zest.