These irresistible apple recipes are the best ways to use this crisp fruit! There’s something for everyone, from salad to apple pie.

Got apples? Here’s a collection of deliciously fun apple recipes for using this popular super fruit! There’s all the standards like apple pie, apple crisp, and applesauce. But there are so many more creative ways to use apples in your cooking. Throw them into salads, roast them with cauliflower, or add them to pancakes or smoothies for a healthy breakfast. The sky is the limit with apples, so…why don’t we get started? 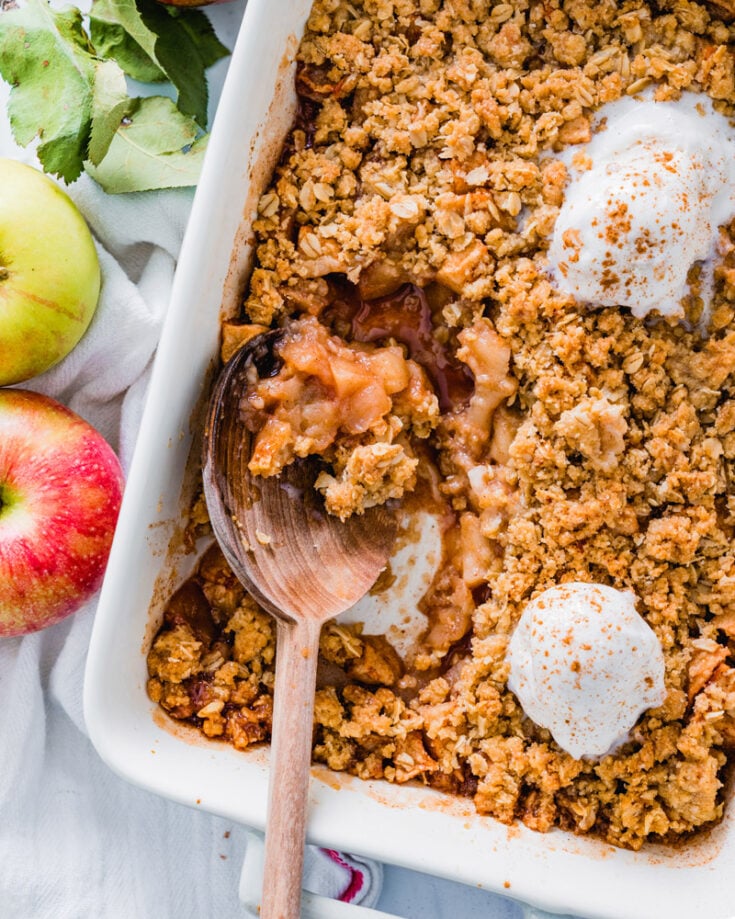 At the top of our apple recipes: apple crisp! This recipe is absolutely classic, harnessing all that cozy nostalgia of the season. The crumble topping is the ideal texture: crispy but not crunchy, and buttery but not soft. The fruit layer below will make your heart sing: cinnamon, a hint of ginger and allspice set off just a hint of orange and lemon zest. 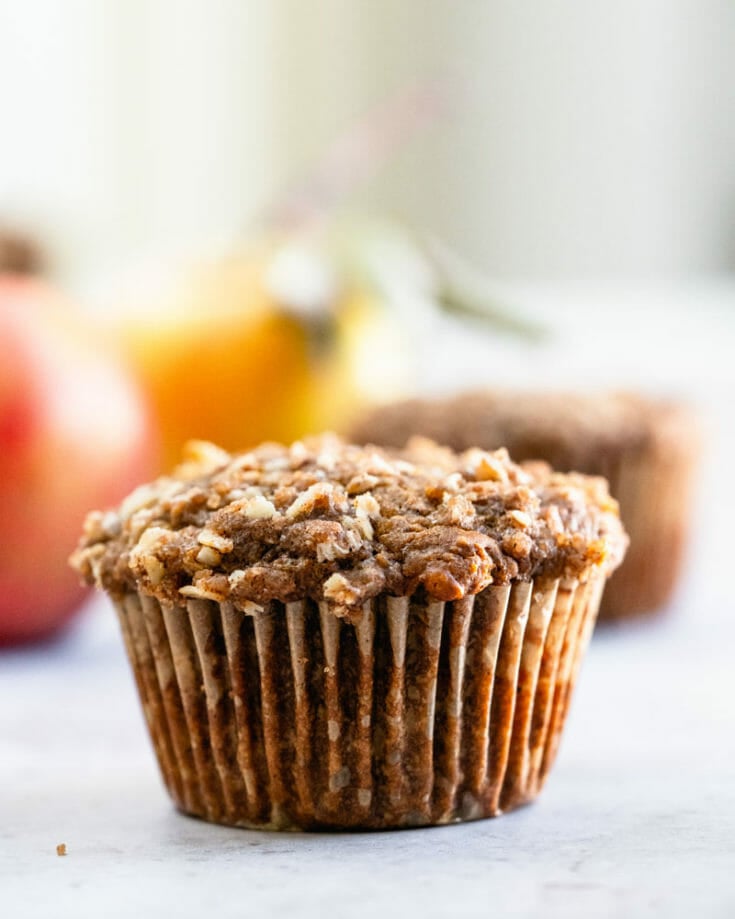 These incredible apple muffins have a a crunchy streusel topping made of glittery turbinado sugar and a little butter and oats, which adds just the right sweetness and crunch to each bite. The muffin is flavored with cinnamon, ginger and allspice, and features both applesauce in the batter and chunks of diced apple. 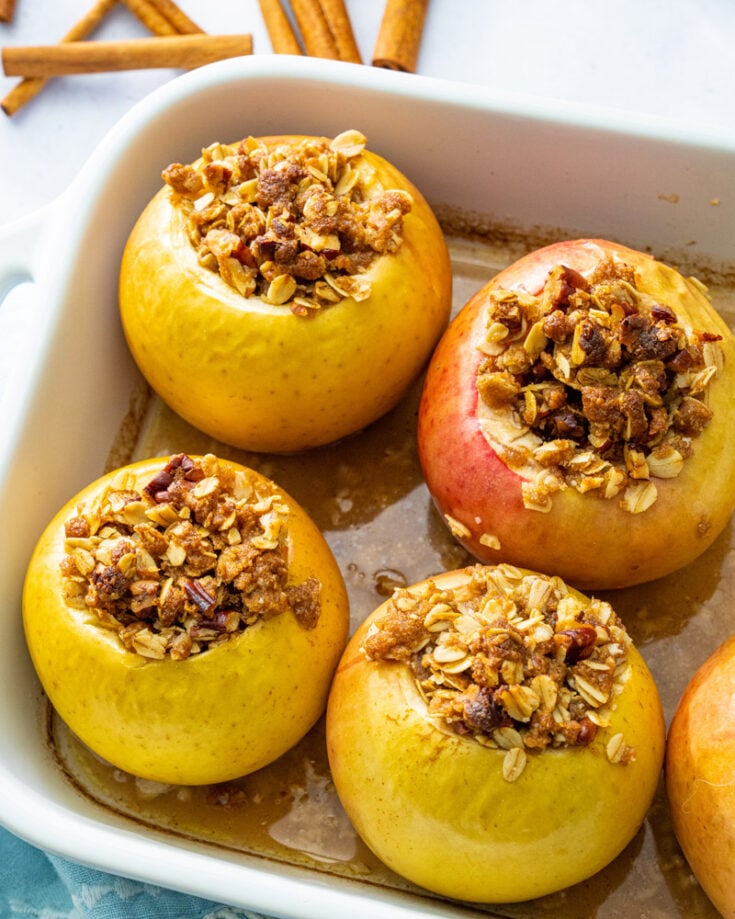 Got a craving for a cozy fall dessert? Try Baked Apples! It’s like a short-cut apple crumble, but lighter, easier and tastier. Stuff the sweet tart fruit with oats, brown sugar, cinnamon, ginger and allspice, then bake until sweet and tender. The tart tang of the apple against the spiced crumbles is a bit of a revelation! 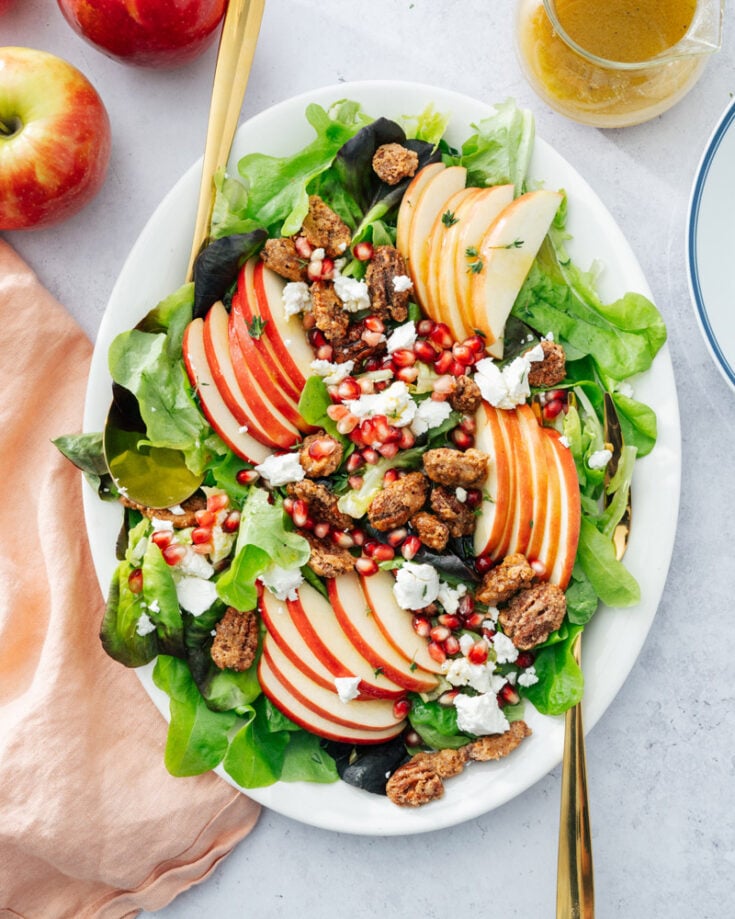 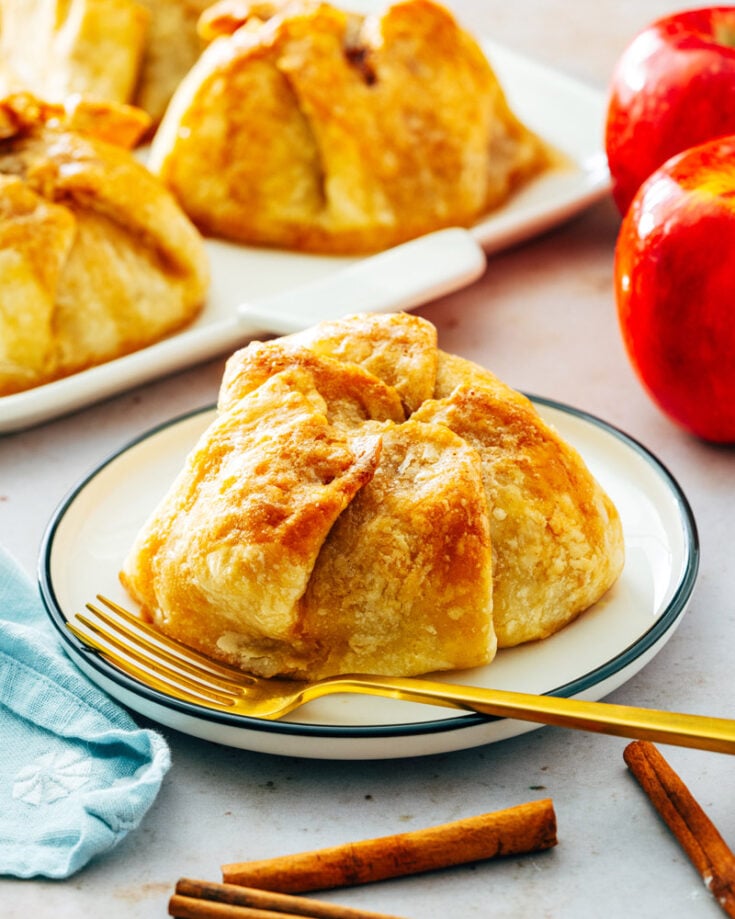 Introducing…Grandma’s Old Fashioned apple dumplings recipe! Yes, this really is Grandma’s recipe: we worked with Alex’s mom to adapt her famous fall favorite for your home kitchen. Tender, cozy-spiced apples are baked up in a flaky pasty crust with a spiced brown sugar syrup. 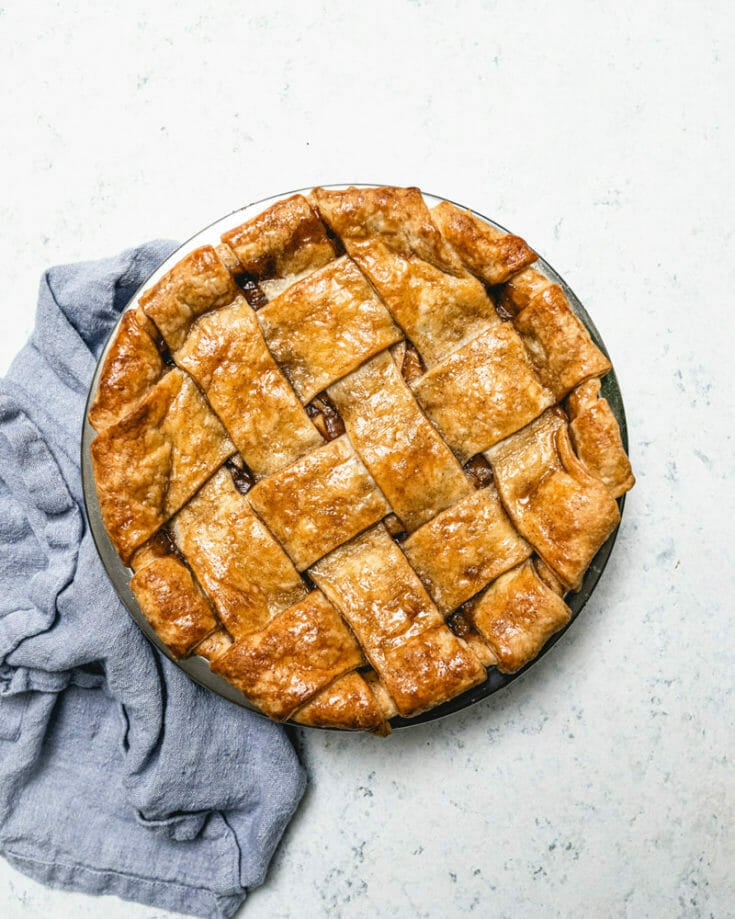 Next up in our apple recipes: the very best apple pie. Really. This one has the perfect buttery crust, woven into a rustic lattice and painted with a sparkly maple glaze. The interior is gooey, sweet apples, spiced with cinnamon, cloves and fresh ginger. It's so, so flavorful and looks positively stunning. Head to the post for tutorials on how to cut apples fast and how to weave a lattice crust. 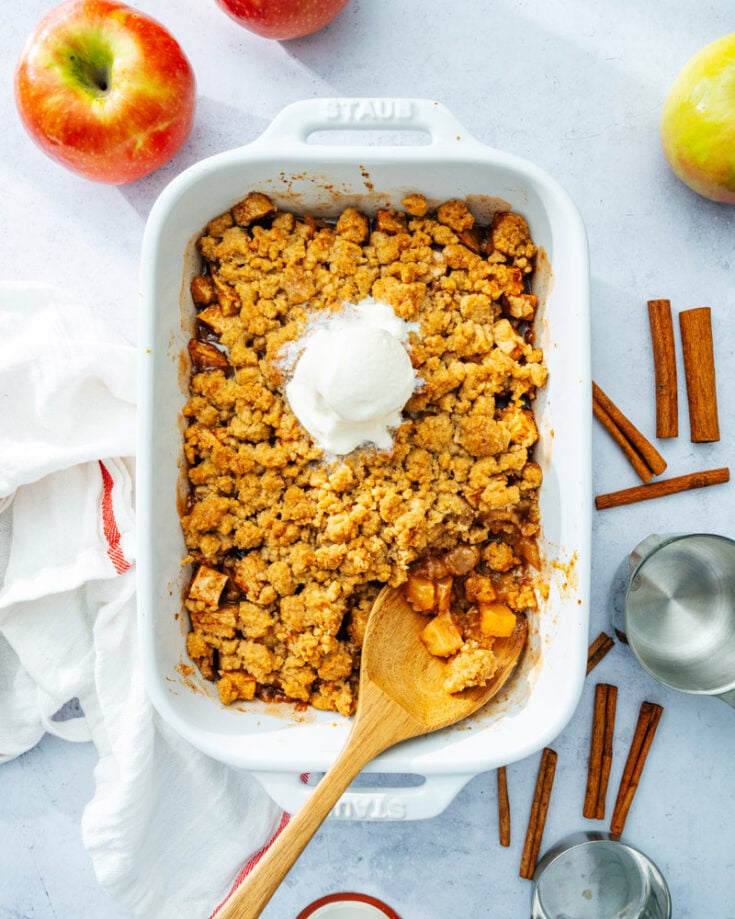 No need to find that recipe card Grandma scribbled down: this one is just as classic. Golden, crunchy brown sugar crumbles top a sweet tart filling of warm spiced fruit, seasoned with cinnamon, allspice and ginger. Bake this one on repeat all fall and winter, and you’ll never tire of it.

Here’s an apple recipe for cozy mornings that’s got a secret…it’s a healthy breakfast idea, too. Meet these apple cinnamon pancakes! They’re fluffy, cinnamon-spiced, and guess what? They’re made of 100% oats, no flour! Using oats lends a warm, homey flavor and makes them more filling and nutrient-dense than the traditional pancake. 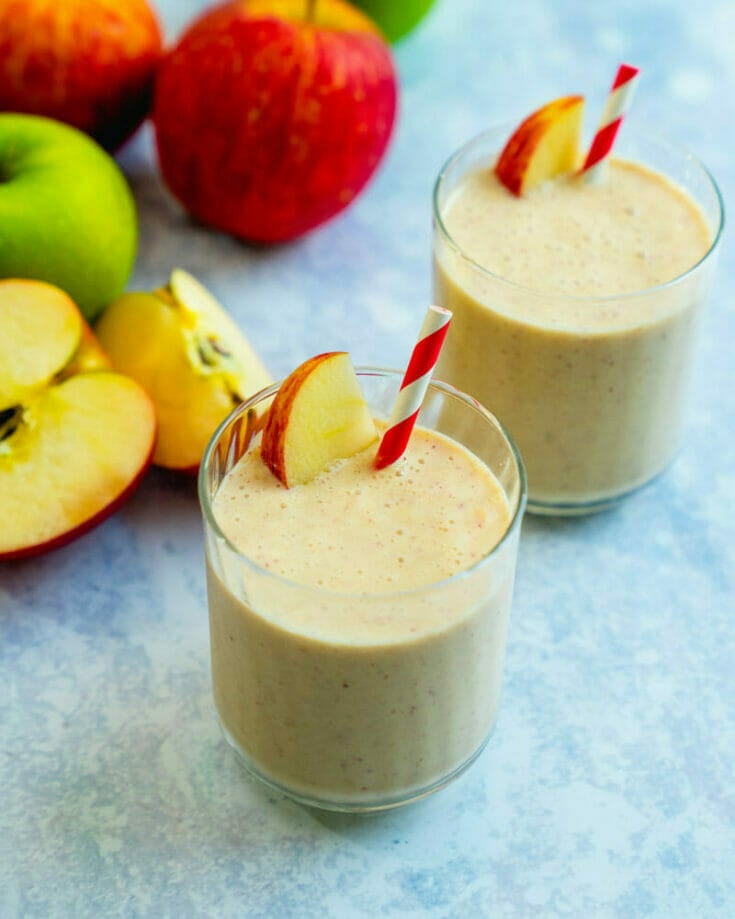 Here’s an apple recipe that’s full of cozy spiced, naturally sweet flavor: the perfect apple smoothie! This one works anytime and in any season. But of course it’s perfect for fall when you’ve got mounds of apples to use up. In fact, it’s a healthy way to enjoy the flavors of apple pie or apple crumble! Cinnamon and vanilla are just the right compliment to the sweet tart fruit. It’s also loaded with protein from Greek yogurt, which gives it just the right creamy texture. You’ll almost feel like you’re drinking an apple pie milkshake…but a wholesome version! 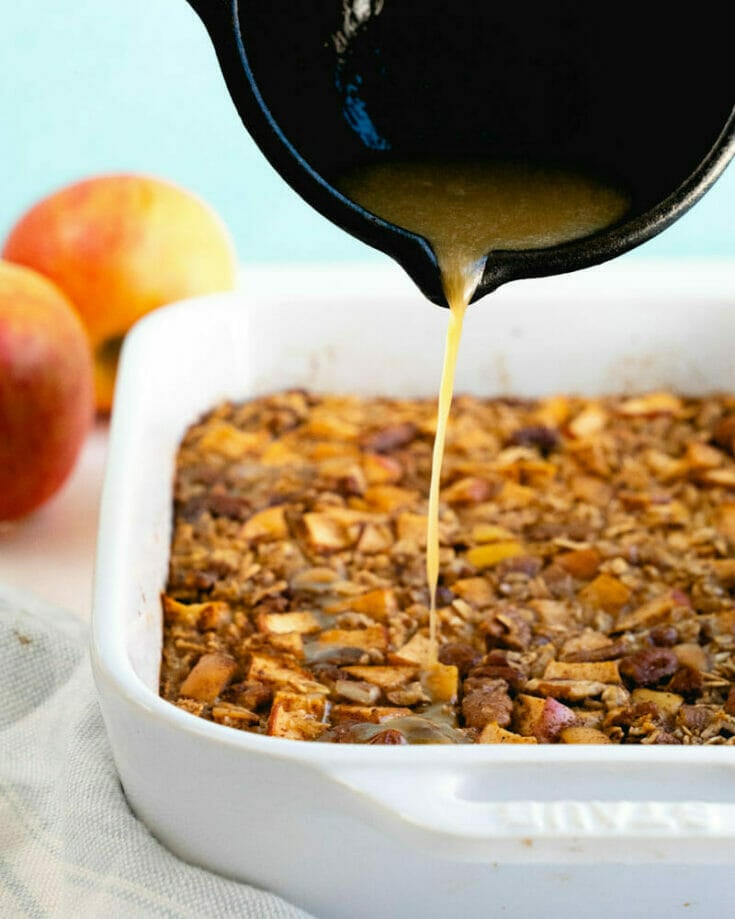 Here’s our very favorite way to eat apple recipes for breakfast: this baked apple oatmeal! When the mornings start to get cooler, this is the best morning treat to break out. It’s easy to make with ingredients you might already have on hand. And the flavor of tender, sweet apples paired with maple syrup, cinnamon and allspice…well, you’ll want to make it every day! It works as a brunch recipe for entertaining, or you can make a big pan and eat off of it for breakfasts all week. 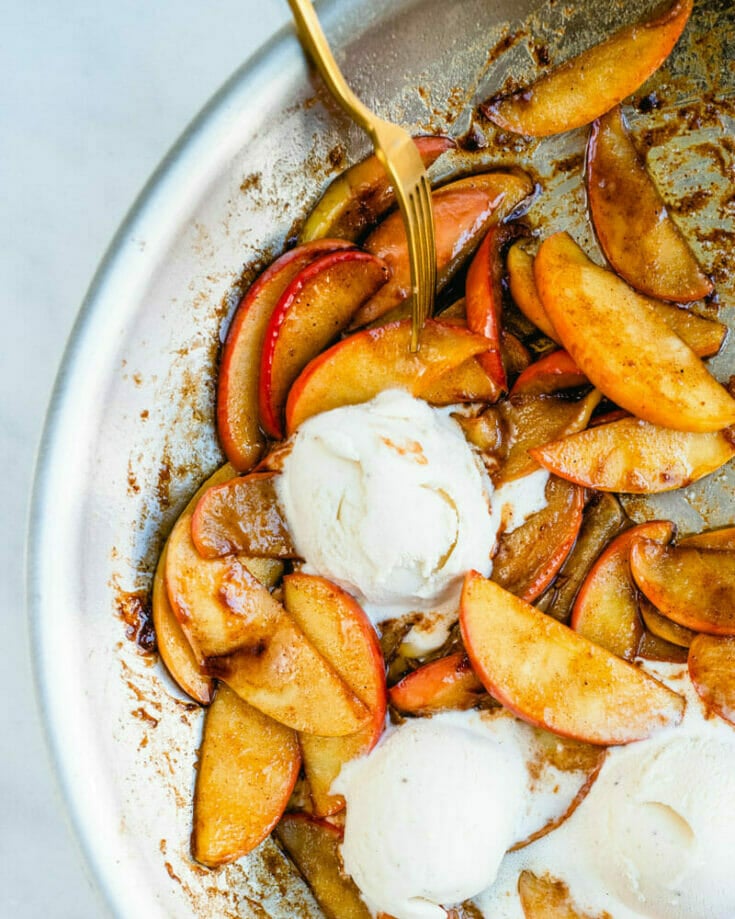 Want an easy apple recipe that's a sweet treat? Look no further than these sauteed apples! There’s no baking necessary, and no advanced preparation. Just slice up some apples, saute them in butter and spices, and bam! Eat it warm topped with vanilla ice cream, and there’s really not much better. In fact, why even make apple crisp or apple pie at all?

And now for one of the most classic of all apple recipes: applesauce! Making applesauce at home is easier than you think. This recipe skips the extra sugars of the store bought kind! If you'd like, add cinnamon and a splash of maple syrup: or leave it unsweetened! Here’s how to make applesauce at home: on the stovetop or in the Instant Pot. 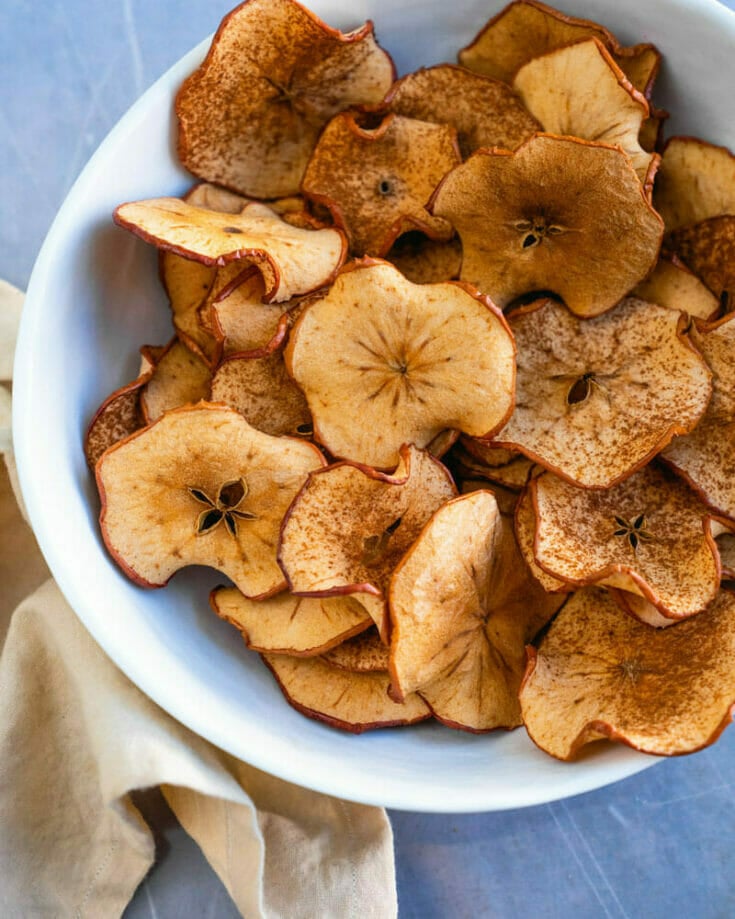 Here's another project in our apple recipes: dried apples! If you’re looking for a little recipe that’s a fun kitchen DIY, fairly easy, and makes your house smell divine, look no further than apple chips! A tip before you start: a mandoline is helpful for this recipe to cut the apple paper thin. Douse with cinnamon and bake in a low oven for a few hours. They come out crisp and sweet. 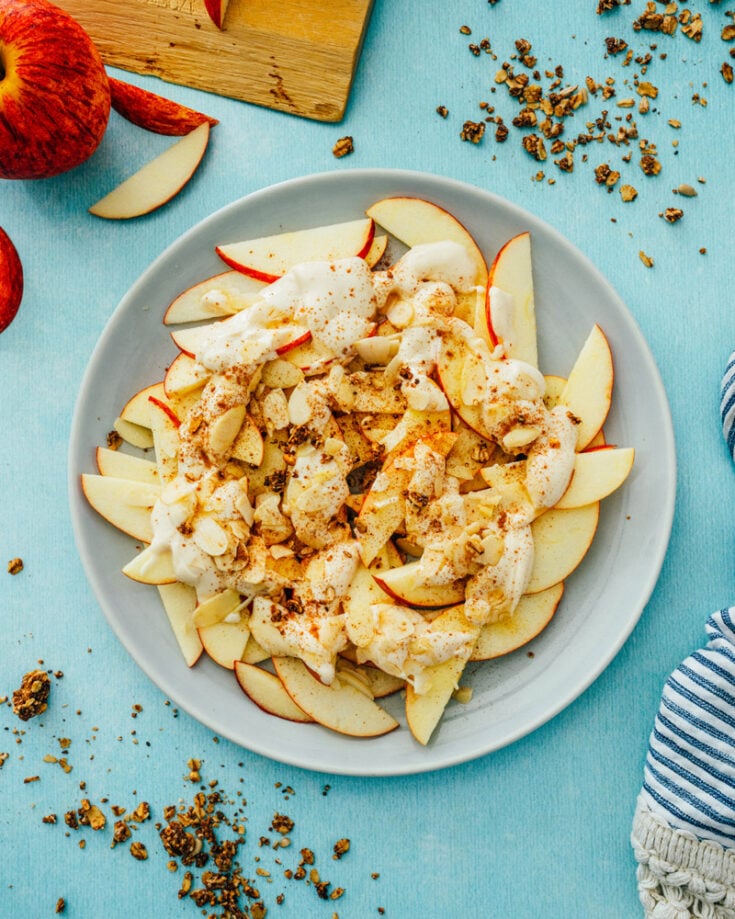 Here’s a healthy snack that’s captured our imagination: Apple Nachos! This simple combination of sweetened yogurt, almonds and apple slices is so refreshing and delicious, it’s hard to stop sneaking bites. It’s really just loaded apple slices, but it’s all in the branding, right? Here’s how to make this fun snack. 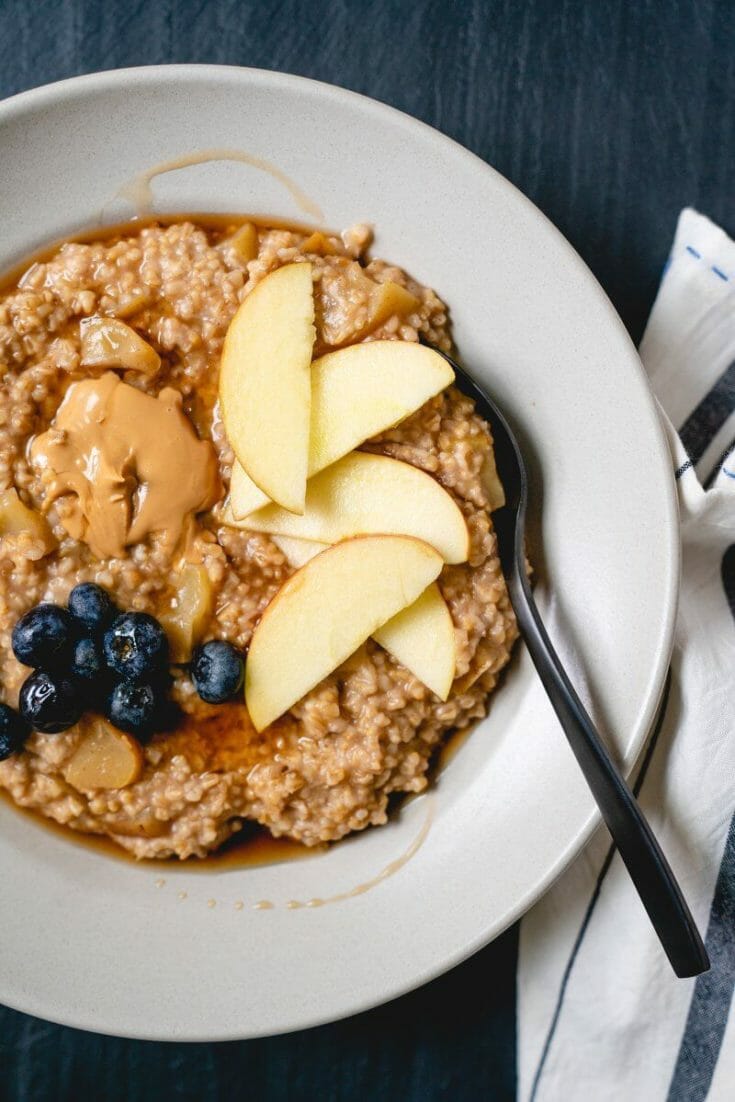 This big pot of oats is apple cinnamon flavored and oh so delicious! Why make steel cut oats? Both steel cut and rolled oats have the same benefits: lots of fiber and plant-based protein to start your day. But steel cut oats are less processed, which may help you to feel fuller and have less of a “spike” of energy after eating! Top this apple recipe with sliced apples and cashew butter. 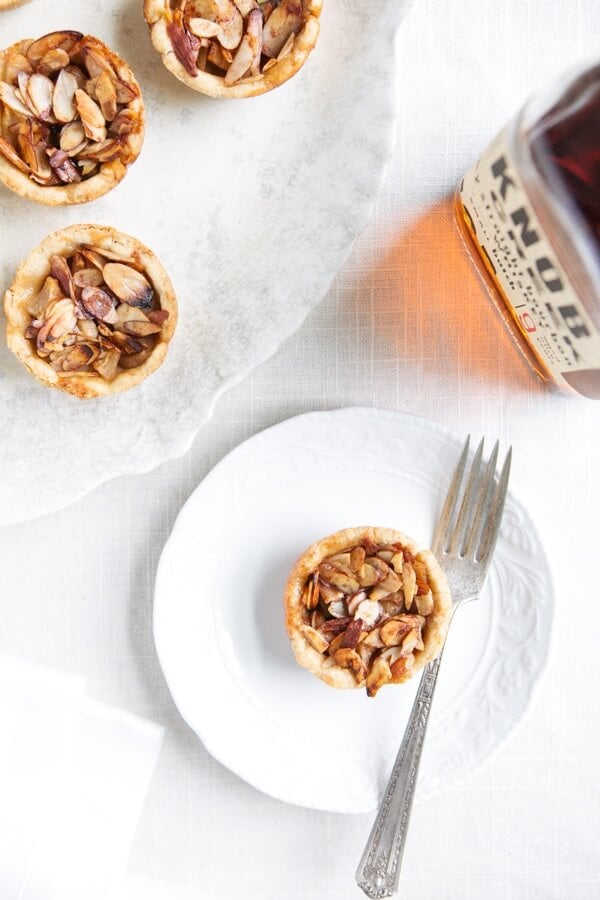 What’s more fun than apple pie? Mini apple pies! Am I right? There’s something about miniaturizing anything that attracts attention. And this mini apple pies recipes is the cutest thing to grace your table. Even better, they’ve got a splash of bourbon. Yep, these are the apple pies of your dreams! (And don’t worry, they’re safe for the kiddos because the alcohol cooks out when baking.) 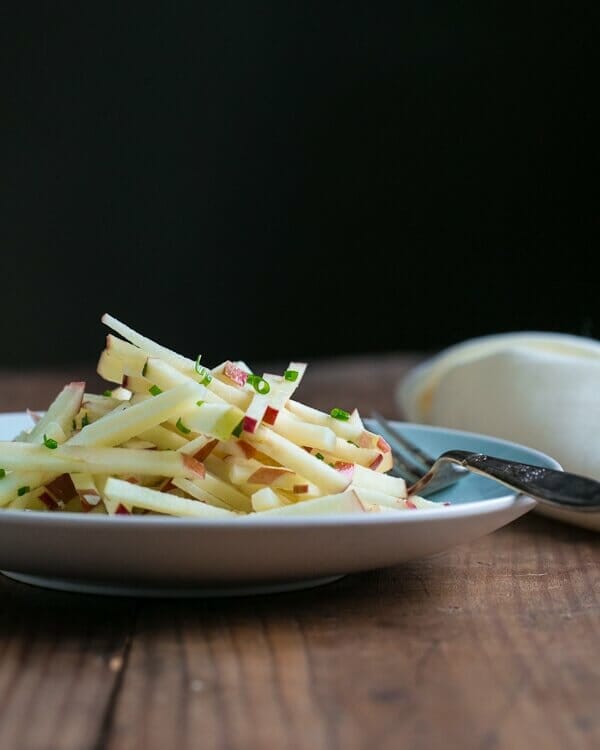 This refreshing apple manchego salad recipe features apples and Spanish Manchego cheese cut into matchsticks, dressed simply with a bit of olive oil and chives. The way these ingredients are combined in such a simple way makes each shine! Manchego cheese has a unique flavor: it's available at most mainstream grocery stores. The way the apples and cheese are cut makes it hard to distinguish between the two – making it all the more fun to guess what will be part of each bite! 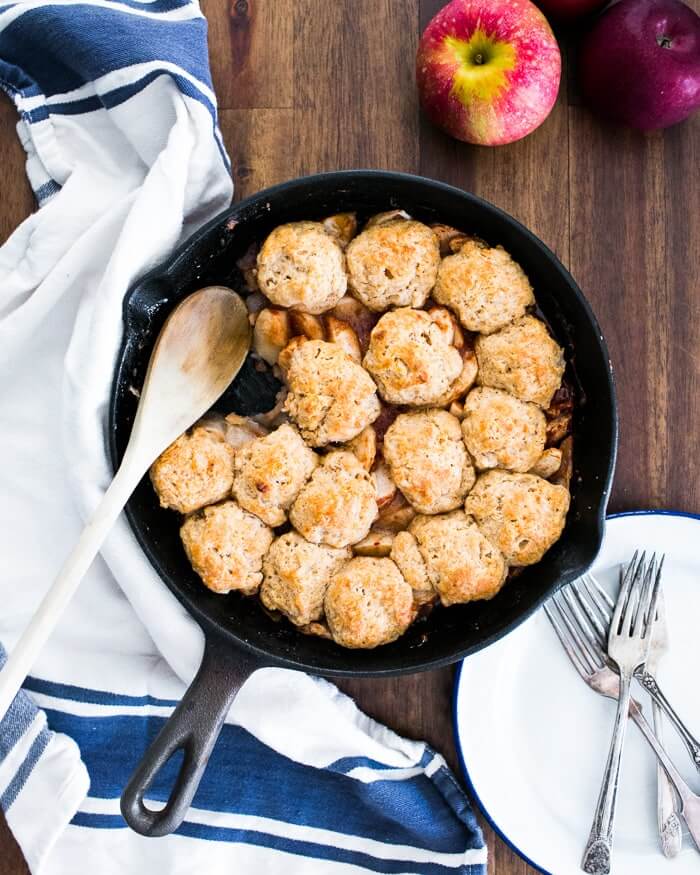 This apple recipe combines biscuits and cinnamon-y baked apples for a fall treat! It's baked up in a cast iron skillet until the apples are tender and the biscuits are golden on top and doughy on the inside. Serve this skillet apple cobbler with vanilla ice cream, whipped cream, yogurt whipped cream, or coconut whipped cream 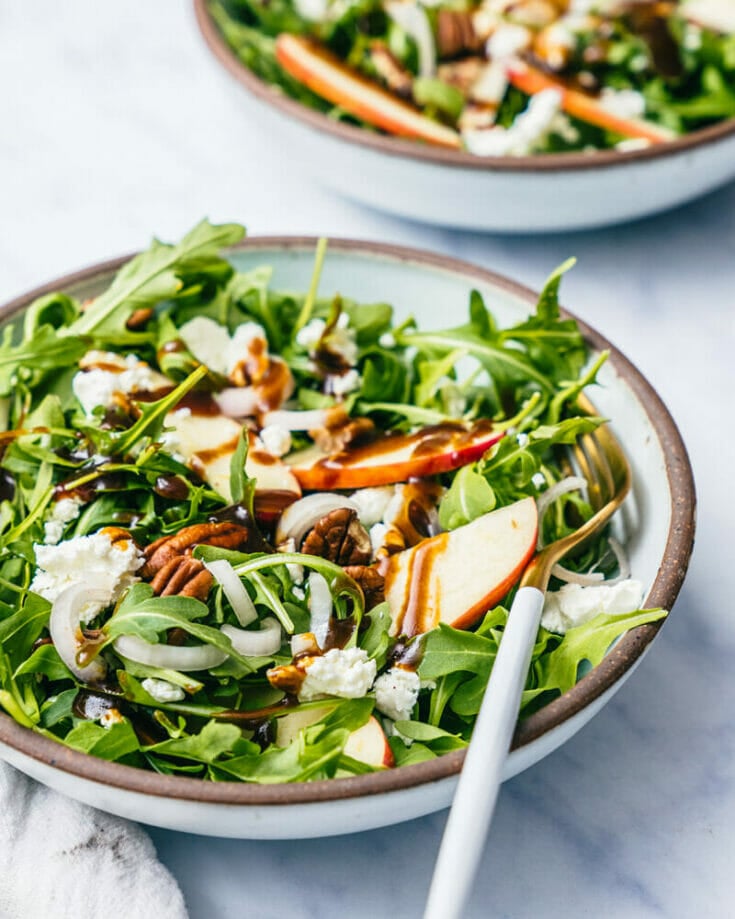 Here’s a delicious way to use apples in a savory recipe: this Goat Cheese Salad with Arugula and Apples! It’s simple and comes together quickly, but man does it deliver on flavor! The crunch of the apples, creamy goat cheese, and fluffy arugula are the ideal pair for the tangy sweet dressing. 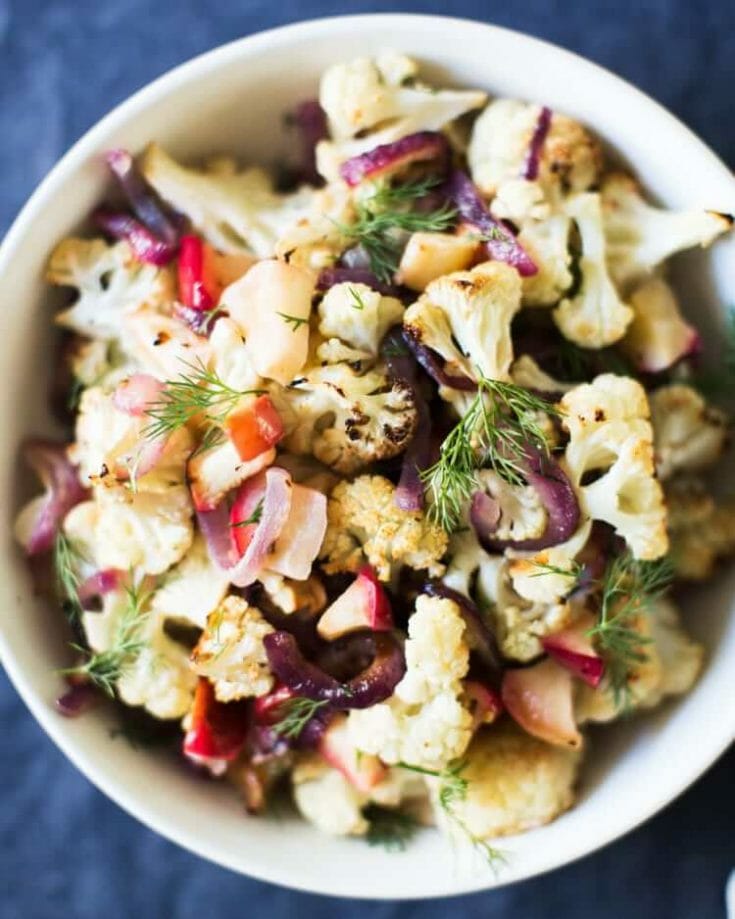 Last up in our apple recipes: one that will blow you away with its flavor and beautiful colors! These roasted apples with cauliflower are a unique pairing that everyone will be talking about. The sweetness of the apple works perfectly with the savory cauliflower: and topping with fresh dill brings an herbaceous note. The best part? The bright purple of the roasted onion against the bright pink of the apple is stunning.

Did see something you liked? Here are some other ideas for serving apples:

How to store apples

Here’s what to know about storing apples to make in these apple recipes!