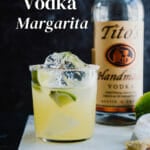 This Vodka Margarita is tangy and delicious: a smooth spin on the classic cocktail! It’s a fun variation that’s oddly satisfying.

Can you make margaritas with vodka? Turns out you can, and they taste great, too! Try the Vodka Margarita, a smoother spin on the classic cocktail. I must admit: when Alex first mentioned this idea to me, I thought it was a little crazy. A margarita without tequila is like…pizza without cheese! (OK, that’s a thing and it’s good too. Point taken.) It wasn’t until I took the first sip that I was sold. It’s tart, citrusy and so smooth, without the traditional bite on the finish from the tequila. Yes, this one’s worth making! Even if you’re a tequila fan, which we are.

The vodka margarita is a spin on the classic cocktail with vodka instead of tequila. It runs in a long history of alcohol swaps, like the vodka martini or the endless variations of Moscow mules. As you likely know, the margarita is one of the most popular cocktails of all time, invented in the 1930’s in Mexico. The classic way to make it has just three ingredients: tequila, lime and Triple Sec. Here you’ll swap in vodka for tequila, then add orange juice to add back a little complexity in flavor. The ingredients you’ll need are:

Astute mixologists will notice that the vodka margarita is very similar to a Kamikaze: it’s made with vodka, triple sec and lime. But of course for the margarita, you’ll want to have that classic salt rim.

Best triple sec to use

Let’s be honest: you can use any quality vodka you’d like here. Because vodka is so neutral in flavor, it’s mostly overpowered by the citrus flavors in this drink (by design!). But how about the orange liqueur? Here’s the best triple sec to use in margaritas:

The salt rim is required for a vodka margarita

Because a vodka margarita is not really a margarita, the salt rim is key to making it feel like one. It’s not optional! Here are a few tips on how to make a salt rim:

It’s easy to make a vodka margarita, but if you’re entertaining: spending 5 minutes per drink can make you busy! The solution? A vodka margarita pitcher! Simply place the following ingredients in a pitcher:

Stir it together, and you’ve got 8 drinks in 5 minutes! Make sure to add the exact amount of ice: it dilutes the drinks just enough.

When to serve a vodka margarita

The vodka margarita is a smooth spin on the classic! Use it if you run out of tequila, or if you’re mixing drinks for people who don’t love the stuff. It works as a:

This Vodka Margarita is tangy and delicious: a smooth spin on the classic cocktail! It’s a fun variation that’s oddly satisfying.