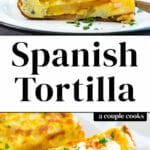 Here’s how to make a traditional Spanish tortilla! Tortilla española is a potato and egg omelette that is a classic dinner or tapas recipe.

Here’s a traditional Spanish recipe that’s everywhere in country: Spanish tortilla! Tortilla española is a Spanish omelet made with eggs and sliced potatoes. You can find tortilla in almost every bar and restaurant. It’s a classic Spanish tapas recipe, sliced into wedges and often serve with a toothpick and a dab of aioli. It’s also often turned into a sandwich filling as a bocadillo de tortilla. When I lived in Spain years ago, I loved sampling each restaurant’s house version of tortilla. So we’re thrilled to bring you this recipe from the beautiful new cookbook Diala’s Kitchen by our pal Diala Canelo.

What is Spanish tortilla made of?

The Spanish tortilla is an iconic dish known as Spanish omelete, tortilla española, or tortilla de papatas. It’s made by frying potatoes in olive oil, then cooking them into an egg omelette. Spaniards eat it for any meal: breakfast, lunch, dinner, and it’s one of the most popular Spanish tapas. In fact, it might be more prevalent than the national rice dish, paella! Make it correctly and you’ll have a perfectly salted, thick pieces of omelette layered with buttery fried potatoes.

Here are the ingredients you’ll need to make a Spanish tortilla:

How to make Spanish tortilla, aka tortilla española

This is the traditional way to make Spanish tortilla, so it’s going to take a little time. Set aside 1 hour for this task! It’s not a quick and easy dinner recipe: view it as a fun project to experience Spanish culture. The nice thing is that you can easily make it ahead, and let it rest until mealtime or refrigerate leftovers for later (see below). Here are a few tips to know about how to make tortilla española:

Can you eat Spanish tortilla cold? One of the great things about tortilla española is that you can eat it cold, room temperature or warm. That makes it incredibly versatile. Eat it warm for dinner or brunch as a main dish. Serve it room temperature or cold sliced into wedges or squares as a Spanish tapas recipe. Really anything goes!

You can leave Spanish tortilla out on the counter at room temperature for up to 2 hours before serving, making it easy to make up in advance. In Spain, people leave it out even longer: they’re much more liberal with leaving things on the counter than we are here in America (and I never had any adverse effects!).

How long will a Spanish tortilla keep?

How long does Spanish tortilla last? 3 days. You can serve tortilla española at a variety of temperatures, so it’s easy to serve as leftovers or make in advance. Here are some notes:

What to eat with Spanish tortilla

There are many ways to eat Spanish tortilla, depending on what meal of the day it is. Spainards traditionally eat tortilla española any time of the day: breakfast, lunch, dinner or tapas. Here are some ideas:

About the book: Diala’s Kitchen

This recipe comes to you straight from the new cookbook Diala’s Kitchen, written by the lovely Diala Canelo. Diala is an incredible recipe developer and food photographer (you must follow her on Instagram). She is Dominican and now lives in Toronto, and loves to travel. One of the things we love about her book is that her food style is so similar to ours: fresh, plant-forward meals with occasional beautiful seafood, too. We literally want to make every recipe in the book: Falafel Salad, Salmon Burgers, Green Goddess Soup, Baked Feta, Truffle Pasta, Shrimp Stew with Coconut-Tomato Sauce, Caramelized Banana and Cinnamon Loaf, Pumpkin Scones…the list goes on!

One special thing about this Spanish tortilla recipe is that Diala and I connected over a deep love for Barcelona. I studied abroad in Madrid and while I adore that city, my heart was stolen by beautiful Barca. Alex and I visited Barcelona in 2018 with our son Larson and I got to share all my favorite food memories with them. Diala recently visited Barcelona this year, and growing up Dominican, her culture was heavily influenced by Spanish cuisine. So we are absolutely thrilled to share her recipe for traditional tortilla española. Congratulations Diala, on an incredible book! We can’t wait to cook through it more.

This Spanish tortilla recipe is…

Here’s how to make a traditional Spanish tortilla! Tortilla española is a potato and egg omelette that is a classic dinner or tapas recipe.

For the Spanish tortilla

Recipe reprinted with permission from Diala’s Kitchen: Plant Forward and Pescatarian Recipes Inspired by Home and Travel by Diala Canelo.

*Use Yukon Gold or another waxy potato like red skinned. Do not use russet potatoes.

** Only ¼ cup of olive oil is used in the recipe; the rest is discarded as part of frying. Most of the salt is also absorbed by the frying oil and discarded.

***You can also use a larger pan like a 12-inch skillet: the tortilla will be thinner and the cook time will vary a little.