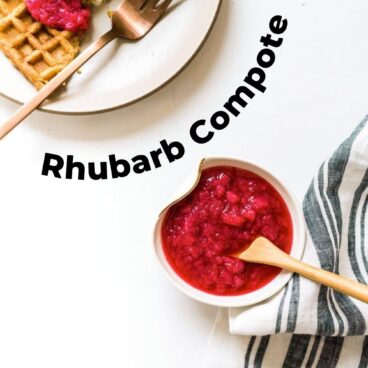 This easy rhubarb compote is as delicious as it is eye-catching! Serve over waffles or pancakes, oatmeal, yogurt, or ice cream.

Growing up, there was a big old rhubarb plant in the back of my parents garden. It looked like a giant weed. I remember trying a bite of the greenish pink stalk raw from the cutting board as my mom chopped it for a rhubarb crisp. UGH, was it tart and disgusting! But sweetened with sugar and nestled under an oat crumble topping, it was the stuff dreams are made of.

That sweet tart flavor takes me right back to childhood, licking the sticky pink goo from my plate. It’s exactly the inspiration for this rhubarb compote recipe! Keep reading for this fantastic solution to what to do with rhubarb.

How to make rhubarb compote

This year, we decided to start spring early with a rhubarb compote to top some waffles. True to my child self, I gave our son Larson a greenish pink cube of raw rhubarb to chew on from the cutting board. His face crinkled up in confusion, but he kept chewing it all the same. But once sautéed with sugar into a hot pink rhubarb compote, he was a definite fan. After we swirled a smear of it into his oatmeal, he was in heaven.

This rhubarb compote recipe is supremely easy to make. Alex and I typically opt for natural sweeteners like maple syrup, but in a compote the sugar performs some chemistry to break down and thicken the rhubarb, so we decided not to mess with perfection. To make rhubarb compote:

Use this rhubarb compote for topping…

From there, you can use the rhubarb compote on anything you like! It’s pretty sweet, so a little of the stuff goes a long way. We served it over these fluffy gluten free waffles, but it would be perfect on pancakes or French toast. Leftover rhubarb compote is perfect to swirl into yogurt, oatmeal, or as a simple dessert, vanilla ice cream. Here’s to the simple, seasonal pleasures: like rhubarb compote in the spring! And aside from the flavor, the vibrant hot pink color can’t be beat.

Here are some recipe that would be perfect with a dollop of rhubarb compote:

This rhubarb compote recipe is…

This easy rhubarb compote is as delicious as it is eye-catching! Serve over waffles or pancakes, oatmeal, yogurt, or ice cream.