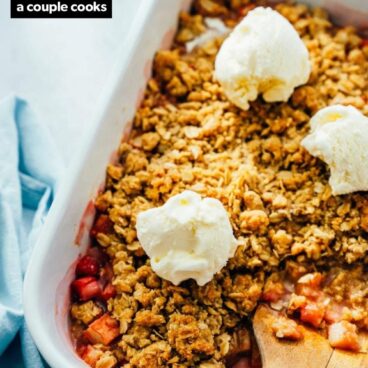 This rhubarb crisp recipe has a golden, crunchy crumble topping and a gooey, sweet tart filling. It’s just the best!

Here’s spring and summer’s best treat, if you can find a bunch of those magical pinkish-green stalks: Rhubarb Crisp! This homey dessert is absolute summer nostalgia: each bite is a burst of gooey, sweet tart candy topped with a golden oat crumble. Top it with melty vanilla ice cream, and there’s nothing better than scooping up heaping mouthfuls on a summer’s evening. Here’s our favorite rhubarb crisp recipe that will wow everyone.

Ingredients in this rhubarb crisp recipe

This rhubarb crisp recipe is just sweet enough, with a hearty oat crumble and a gooey rhubarb filling. A couple secrets? A heavy dose of oats keeps the crumble textured and crunchy, and hint of orange zest makes the filling pop. It’s not required, but it adds just the right subtle sophistication. Serve with vanilla ice cream or silky crème anglaise and it’s stunning. Here’s what you’ll need:

Keys to the flavor and texture

This apple crisp recipe with oats is pristine: it’s just what you’d expect in a classic, but a little bit elevated. Here are a few notes on what makes it so divine:

Want to make a vegan or gluten-free rhubarb crisp? Here are a few easy substitutions that make this recipe work for almost any diet:

Make it a strawberry rhubarb crisp

Want to use that classic combination of sweet red berries and rhubarb? You can do that too! Simply substitute 1 pound of the rhubarb with 1 pound strawberries, or about 3 cups sliced. If you’d like, you can lower the sugar in the filling slightly (we’d try a scant 2/3 cup).

Want to save rhubarb crisp leftovers? Here’s what to do:

You’ve got to capitalize on the season when you can find rhubarb! Here are a few recipes we love: 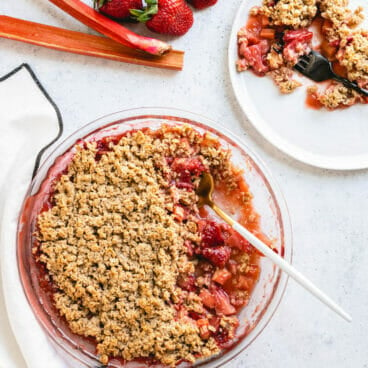 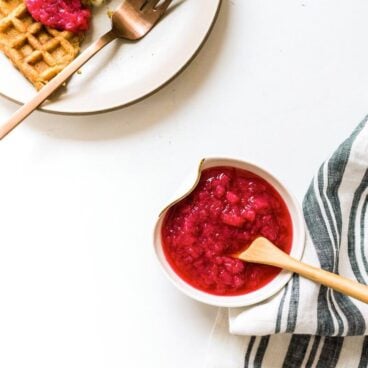 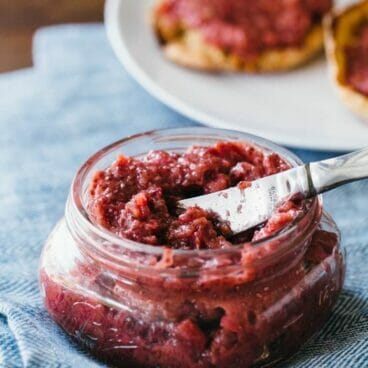 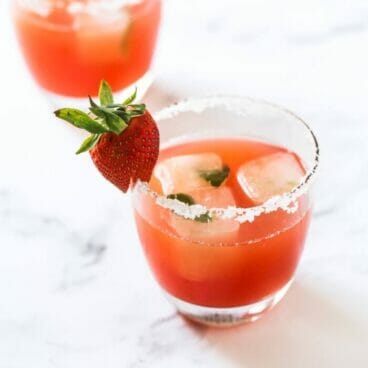 This rhubarb crisp recipe is…

Vegetarian. For gluten-free and vegan, see the substitutes in the recipe below.

This rhubarb crisp recipe has a golden, crunchy crumble topping and a gooey, sweet tart filling. It’s just the best!