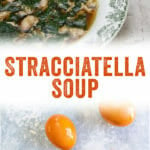 This 15-minute stracciatella soup is essentially an Italian take on egg drop soup. It’s incredibly simple to make and is perfect on chilly days.

Leave it to the Italians to have beautiful words for even the most unglamorous of concepts. “Stracciatella” (strah-chi-ah-tay-lah) literally means “rags” in Italian. I first came across the word as a gelato flavor on my first trip to Italy (“I’ll take the stra…stra…that one!”). When it comes to gelato, the “rags” are bits of chocolate mixed throughout a creamy vanilla base. However, we were excited to learn that the concept of “stracciatella” also applies to soup. In this case, the rags are eggs – a kind of Italian egg drop soup.

Contrary to its fancy name, this stracciatella soup was one of the easiest we’ve ever made! It only takes about 15 minutes to put together, and it is a delicious way to enjoy your dark, leafy greens. (You could also substitute chard for the spinach.) The cheese and egg add a wonderful savory flavor – if you happen to have some Pecorino on hand, it’s a great option, though Parmesan works just as well.

What is stracciatella soup?

Straccietella soup is an Italian soup with “shreds” or rags of eggs floating in a broth. It’s popular around Rome in central Italy, and was traditionally served around Easter. Some American versions of the soup include spinach. For our take below, we added white beans to up the plant-based protein and make the soup a little more filling.

Our favorite part about this recipe is that we almost always have the ingredients on hand. So we can whip up a batch of stracciatella at a moment’s notice! For this easy stracciatella soup recipe, here’s what you’ll need:

How to make stracciatella soup

To make this Italian soup, you first need to bring the vegetable broth to a boil. In a separate skillet, you’ll infuse garlic into olive oil: add the oil and place the whole garlic cloves in the pan, and heat for several minutes to infuse the oil. Once browned, remove and discard the garlic. Then add the spinach to the skillet and heat for a few minutes.

Now it’s time to make soup! Add the wilted spinach to the boiling broth and cook at a steady simmer. While that’s going, beat the cheese and eggs with a fork in a liquid measuring cup. Next, drizzle a small amount of the hot broth into the eggs to temper them. With a spoon, rapidly stir the hot broth and spinach mixture and slowly pour the egg mixture into the soup. Add the cannellini beans, then season with salt and pepper. And there you have it: tasty, cozy, and comforting stracciatella soup!

We adapted this recipe off of a version by Lynne Rossetto Kasper shared on The Splendid Table. Thanks for Lynne for the inspiration!

On tempering the eggs

When you’re making this soup, make sure to follow the instructions on adding the egg carefully. It’s important to heat the broth enough to get the “rags” of eggs to form: we know from experience! Tempering the eggs before adding them to the soup ensures that they scramble a little bit without completely seizing up. You want some rags, but not too many. Let us know if you give it a try – and enjoy the start of soup season!

This stracciatella soup recipe is…

This 15-minute stracciatella soup is essentially an Italian take on egg drop soup. It’s incredibly simple to make and is perfect on chilly days.

Inspired by The Splendid Table

Outside of this stracciatella soup, here are a few more of our favorite easy soup recipes:

Italian recipes are kind of our thing. Here are a few more that we love to serve: