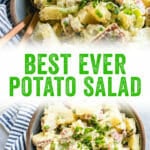 This recipe is that classic, down-home American salad, from the mustard to the dill pickle. Here are all the tricks to how to make potato salad.

Looking for a classic, all-American potato salad for entertaining this summer? This potato salad recipe is all about the grill, flip flops, and hot summer evenings sipping frosé. It’s like the one you had at picnics growing up, or a better-tasting version of the one at your grocery store deli. Basically, it’s as classic as can be! I love all sorts of creative potato salads, like French potato salad and herb potato salad with Greek yogurt…but there’s something to about the classic that really hits it home for me! There are a few “secrets” to getting this classic flavor: here’s all about how to make potato salad.

How to make potato salad

There are a few secrets to making the classic salad that tastes like a million bucks, from the mustard to the dill pickle. Here’s how to make potato salad:

Put all these principles into action, and you’ve got one tasty, classic potato salad that’s begging for barbecues and potlucks.

How long to boil potatoes for potato salad

It’s a hard question, because of the way we do it. We’ve tried all sorts of methods for boiling, but we’ve found to be most consistent is to place the diced potatoes into a pot with cold water, then bring it to a boil. The other side of the coin would be dropping the potatoes into a pot of boiling water. Doing it that way gets a less even boil, and there’s a risk for splashing boiling water.

Using the “potatoes in cold water” method, you’ll place the potatoes in the water and bring it to a boil. Then you’ll boil the potatoes for about 10 minutes. If you’re looking at just the boil time, the answer to the question of how long to boil potatoes for potato salad is 10 minutes. But if you factor in the time it takes to bring the cold water with the potatoes to boiling, that takes about 10 minutes in itself. So the overall time is about 20 minutes, depending on your stovetop and how much water you add.

Can you freeze potato salad?

How long does potato salad last?

Potato salad can be stored in the refrigerator for about 4 to 5 days. If you’re leaving it out at a potluck or a buffet table, it’s recommended to only leave out for 2 hours. Then pop it into a sealed container and store refrigerated.

Outside of this classic potato salad, here are a few more easy potluck recipes:

And here are a few more of our favorite salads:

Vegetarian, gluten-free, and dairy-free. For vegan and plant-based, use vegan mayo.

This recipe is that classic, down-home American salad, from the mustard to the dill pickle. Here are all the tricks to how to make potato salad.