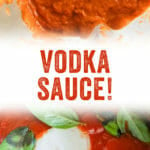 There’s value in quick marinara sauces and fast spaghetti recipes. But at the same time, there’s value in simmering to get mega flavor. The secret to Italian grandmother style vodka sauce? Simmer the sauce. For 1 hour! You won’t see a lot of 1 hour simmers over here, since we’re all about fast and easy dinner recipes. But even more than fast and easy, we’re obsessed with flavor. Our best vodka sauce is so full of flavor, it’s worth every second of that simmer.

How to make vodka sauce

What’s a vodka sauce? Vodka sauce is a tomato sauce that’s simmered with vodka, and often mixed with heavy cream and Parmesan cheese. Now, why is vodka added to tomato sauce? Essentially: it adds an herbal, peppery undertone to the sauce. There’s a scientific reason too: adding small amounts of alcohol brings out flavors that are hidden within the tomato (read more here). Pretty cool, huh?

Is there alcohol in vodka sauce?

Here’s the question you’re probably wondering: Is there alcohol in this vodka sauce? Can I safely serve it to pregnant women and kids? There’s only trace amounts of alcohol in vodka sauce, so you can serve it to kids and pregnant women. Simmering the vodka for 1 hour cooks off most of the alcohol content. This recipe uses ⅓ cup of vodka. After simmering for an hour, there would be less than the equivalent of a teaspoon of vodka per serving.

How to make vodka sauce step-by-step

To show you exactly how to make this vodka sauce at home, here’s a step-by-step tutorial! You’ll be simmering like an Italian grandmother in no time.

There are barely any knife skills involved in this recipe! All you need to do is mince 3 garlic cloves. (Technically, you also have to cut an onion in half and peel it, but we think you can probably handle that one on your own.) But to show you exactly how to mince garlic, we’ve got a tutorial video below!

Carefully transfer the sauce to a blender and blend until smooth! You also can use an immersion blender or stick blender and place it right into the pot.

Step 4: Stir in the Parmesan.

Stir in the Parmesan cheese until it melts. Taste and adjust seasonings as desired. Serve immediately or refrigerate until serving.

Though this vodka sauce takes about 1 hour to make, that time is absolutely worth it. Plus, it’s almost all hands off! Take it from one of our readers, L, who said: “I loved the Vodka Sauce and can’t wait to make it again! An hour goes by quickly…especially if you’re a mom.“

How to serve this vodka sauce

This vodka sauce is perfect for entertaining: what says “you’re special” more than a long-simmered sauce? This recipe is designed to go on 1 pound of any pasta shape that you like! We served it at a Pasta Party on rigatoni in this Vodka Sauce Pasta. Here are a few of our best ideas:

Whatever pasta you use, don’t forget the garnish! Make sure to garnish with finely grated Parmesan cheese and fresh ground pepper. If you’d like, add some torn basil leaves as well: the green makes a beautiful pop against the red vodka sauce!

This vodka sauce recipe is…

Want more Italian recipes? Here are some of our Italian favorites: