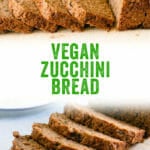 This perfectly moist vegan zucchini bread recipe is so darn good, everyone will be hooked — and no one will believe it’s vegan. Here are all our secrets.

A little confident over here, but we think this is the best vegan zucchini bread recipe you’ll find. Yep, we said it! This zucchini bread is moist, cinnamon-scented, and the perfect sweetness. It’s got just the right texture: it’s not too oily or dense. And, it’s really easy to put together! Alex and I have been on a zucchini baking spree over here, capitalizing on zucchini season. And this vegan zucchini bread has stolen our hearts! (And our 2-year-old Larson’s heart, too.) Keep reading for the recipe!

How to make vegan zucchini bread

This vegan zucchini bread is made in the method of a traditional zucchini bread. It’s a quick bread, meaning that it’s leavened using baking powder and baking soda instead of yeast. Yeast breads are a little more complex to put together, like sourdough bread or artisan bread. But quick breads? Well, as the name implies, they’re quick to whip up and require little technique.

Many quick breads are more similar to cake than bread: zucchini bread and banana bread being the most popular examples. For our version of vegan zucchini bread, we wanted to make it just sweet enough to be zucchini bread but not so oily or overly sweet that it leaves you with a stomach ache.

Here are the ingredients required for this vegan zucchini bread (see below for the full recipe):

To bake, you simply mix the wet ingredients together, then add the dry ingredients and zucchini. Pop it into a loaf pan and bake at 350 degrees Farenheit for about 1 hour. Then cool it and slice into slices!

Have you baked with flax eggs before? If you’ve done any sort of vegan baking, you’ve probably tried one. A flax egg is a mixture of ground flax seed and water that’s used as a replacement for eggs. It’s typically used in baked goods like quick breads, muffins, pancakes and cookies. All you do to make a flax egg is mix 1 tablespoon of ground flax seed with 2 1/2 tablespoons water, and wait for 15 minutes until a gel-like substance forms. See Flax Egg Recipe for more.

Why use turbinado sugar?

In this vegan zucchini bread recipe we’ve used turbinado sugar. What is it? Turbinado sugar is raw sugar with large, light brown crystals. It’s less processed than refined white sugar, because it’s boiled only once to remove the molasses (refined sugar is boiled multiple times). It has a more complex, caramel-y flavor than refined sugar. Because its crystals are large, they add a nice texture to the top of muffins, cakes and breads.

What is a substitute for turbinado sugar? You can use light brown sugar in place of the turbinado sugar. While it doesn’t have the signature large crystals, it has a similar flavor. We’d omit sprinkling it on the top of the bread in this case.

How to store vegan zucchini bread

This vegan zucchini bread stores well: it stays very moist at room temperature! But if you don’t think you’ll eat it all at once, here are our recommendations:

This vegan zucchini bread recipe is…

This perfectly moist vegan zucchini bread recipe is so darn good, everyone will be hooked — and no one will believe it’s vegan. Here are all our secrets.

Looking for more vegan recipes? While we don’t eat fully plant based, it’s often what you’ll find on our table. Outside of this vegan zucchini bread, here are some of our favorite easy vegan recipes: