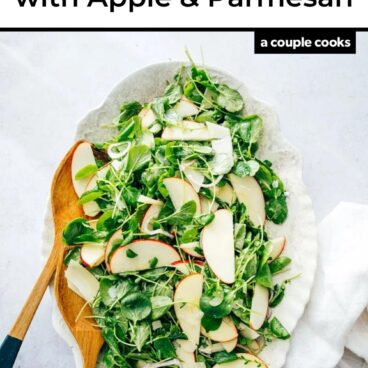 This watercress salad makes the leafy green taste divine! Pair it with apples, lemon and Parmesan shavings for an irresistible side dish.

Got a load of leafy watercress? Here’s a great way to make this healthy green taste divine: Watercress Salad with Apple & Parmesan! Watercress has a pungent bitter flavor on its own. But pair it with lemon, apple and savory Parmesan shavings and you won’t be able to resist another bite! The sweet apple, zingy citrus and flaky salt balance out the bitter green in a beautiful way, making for a fresh and vibrant side dish. Here’s how to make it, and a bit more about working with this leafy green!

Watercress is a leafy green vegetable with a peppery, bitter flavor. It’s a cruciferous vegetable that’s in the same plant family as broccoli, cauliflower, Brussels sprouts and kale. Watercress is an aquatic plant, so in the wild it tends to grow partially submerged in running water or in flooded areas. The peppery flavor of watercress is similar to arugula, so you’ll want to balance it with sweet, salty and rich flavors as a contrast.

In 2014, watercress was named the world’s most nutrient dense food, in a CDC study on powerhouse fruits and vegetables. It’s also one of the oldest documented greens, dating back to ancient Greece and Rome.

When you’re looking for watercress at the store, we recommend buying the baby or young watercress that’s sold in bags. This has a feathery texture and a milder flavor (similar to baby arugula). Avoid bunches of watercress, which are more mature and may taste extremely bitter.

A good watercress salad combines a variety of flavors and textures: because on its own, this leafy green is quite bitter! Taste one bite out of the bag, and you’ll see what we mean. It’s essential to use other vegetables and fruits to cut the intensity: here, sweet apples work wonders at mellowing the green. Here’s what you’ll need:

Tips for making the salad

Once you’ve assembled the ingredients, here are a few tips for mixing up this tasty watercress salad:

Love a good green salad? We’ve got ways to use just about every leafy green. Here are a few more salads we love: 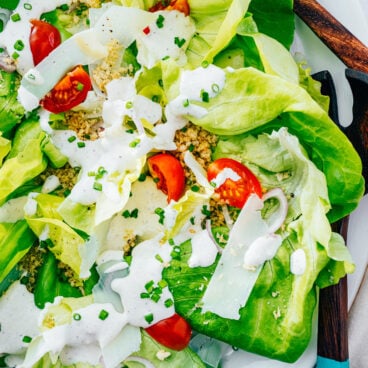 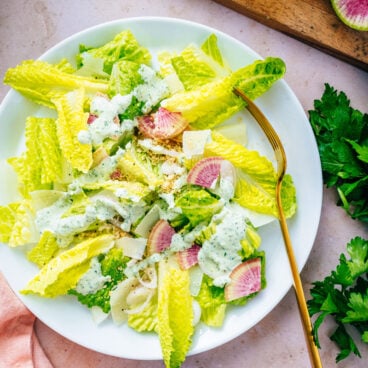 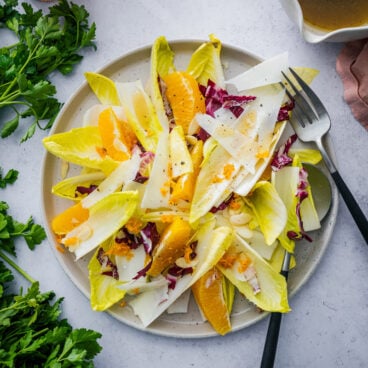 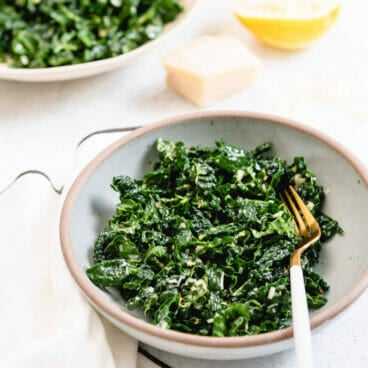 This watercress salad recipe is…

Vegetarian and gluten-free. For vegan, plant-based, and dairy-free, omit the Parmesan cheese.

This watercress salad makes the leafy green taste divine! Pair it with apples, lemon and Parmesan shavings for an irresistible side dish.

*We prefer young watercress that’s sold in a bag, since the flavor is milder than more mature watercress sold in bunches.

**If all you have is kosher salt or flaky sea salt, you can combine these quantities to taste. The flaky sea salt is a nice finishing salt for a salad.